Clouds no problem for Thrift 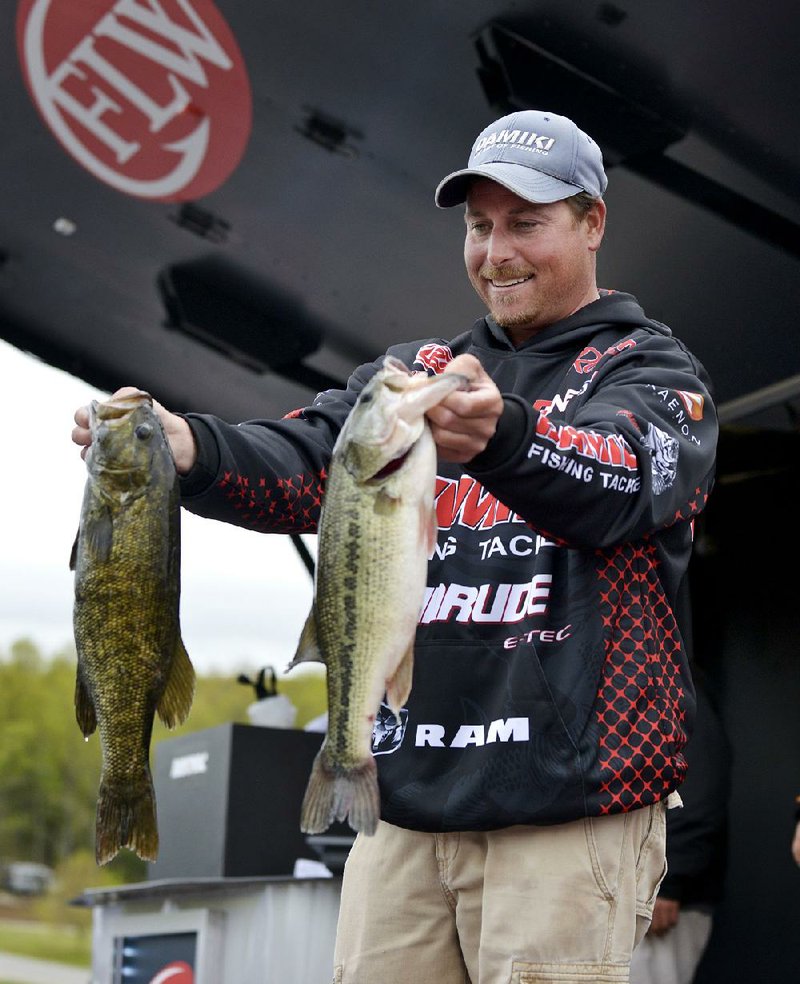 HOT SPRINGS -- Bryan Thrift of Shelby, N.C., used a variety of tactics to catch five bass weighing 15 pounds, 3 ounces, Friday to take a slim lead in the first round of the FLW Cup at Lake Hamilton.

Having practiced for hot, sunny weather, Thrift was surprised at cloudy weather during the first round. He said he adapted by fishing deep and shallow spots with a variety of tactics and caught about 20 fish using 25 different lures.

"Today went a lot better than I expected," Thrift said. "I never thought I could catch 15 pounds. I was shooting for 10, but we had cloud cover, and I think that prolonged the bank bite. I bounced around shallow to deep and caught fish fairly steady. It was a very good day for August."

Thrift said he expects the fishing to be harder today. Recreational boat traffic will be intense, and the FLW anglers already put a lot of pressure on fish in practice.

"It's a small lake, only 7,000 acres," Thrift said. "Guys practiced four days shaking fish off, and this was the first day sticking them. There's a lot of used water out there. It will be tougher and tougher to get bites as the day progresses."

LeBrun, who finished fourth in the 2018 FLW Cup at Lake Ouachita, reported similar results alternating between deep and shallow water.

"I got surprised," LeBrun said. "I thought if I had a great day, I'd have 12 pounds. I had 15. I lost a couple of key bites that I couldn't get to the boat, but the way I fish, that's going to happen sometimes."

Like all of the other anglers, LeBrun said he shared water with a lot of other competitors, but he didn't necessarily compete for spots.

"I don't think anybody in this tournament isn't sharing water," LeBrun said. "I'm getting enough bites where [I] think I can survive. I think I can get 8 to 10 pounds and squeak in, but if I get a couple of big bites, I could have mid-teens again."

Walters had the hardest adjustment. He said he wasn't prepared for cloud cover and that he had to fight the urge to abandon his game plan.

"I kept praying for the sun to come out," Walters said. "What I was trying [to] focus on, I felt like sun helped me. Today was nothing like anything I saw in practice. I struggled with that in my brain, but I decided I was going to win it or lose it doing what I'm doing."

Walters fished about 25 different brushpiles, mostly after several other anglers fished them. He said getting bites was a matter of timing.

"I fished 25 places, but I caught fish in three places," Walters said. "It was a matter of being in a spot when they wanted to eat. I'd fish one spot, and if I didn't catch one, I'd come back at 2. I worked on that in practice. I didn't rule out a spot because I didn't get a bite. I went back multiple times before ruling it out."

Like everyone else, McCaghren fished around a lot of other anglers and had to wait his turn to fish a few places. He said he started slow but picked up the pace as the day progressed.

"It took a little while to get started," McCaghren said. "I finally caught two tiny keepers. I was ashamed to put them in [the] live well, but you never know. And then I caught a 3 1/ 2- to 4-pounder. My goal was get one and hour, and I able do that."

To have a chance to win, McCaghren said he must catch at least three big bass today.

"A 3-pound deficit on this lake is huge," McCaghren said. "I had four quality fish and one good fish. I'm going to have to get three of them on one day out of the next two, but first I've got to catch them tomorrow."