For gun bill, Trump confident on his sway

But endorsement from GOP so far elusive by Compiled by Democrat-Gazette staff from wire reports | August 10, 2019 at 8:59 a.m. 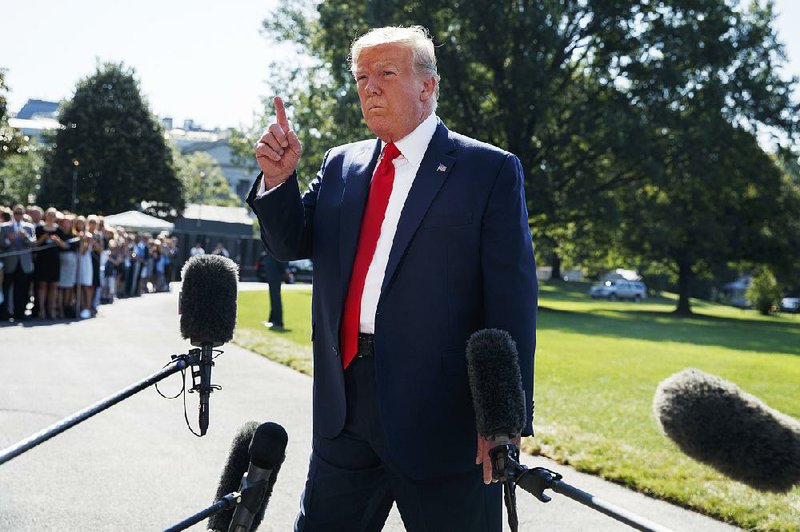 WASHINGTON -- President Donald Trump expressed great confidence Friday that he could rally Republicans around legislation strengthening background checks and persuade the nation's powerful gun lobby to drop its long-standing opposition to such measures.

Appearing outside the White House, Trump said that meetings in recent days have already yielded strong congressional support for "very meaningful background checks" and that his party, which has stymied gun-control efforts this year by Democrats, would take the lead in passing new legislation after returning from an August recess.

"I think Republicans are going to be great and lead the charge, along with the Democrats," Trump told reporters shortly before departing for campaign fundraisers in New York.

The president said that Senate Majority Leader Mitch McConnell, R-Ky., who has refused to allow his chamber to consider House-passed bills strengthening background checks, was now "totally on board" after a conversation between the two men.

In response, a McConnell spokesman said that McConnell had not yet endorsed any legislation since the shootings in El Paso, Texas, and Dayton, Ohio, that left 31 people dead and dozens injured.

[Video not showing up above? Click here to watch » https://www.youtube.com/watch?v=TGbQyeoQtIY]

Trump's previous declarations of support for tougher gun controls, including after the deadly Parkland, Fla., shooting in February 2018, have foundered in the face of opposition from Republican lawmakers and the National Rifle Association, an organization that strongly backed Trump's candidacy in 2016.

Trump acknowledged to reporters Friday that there have been previous efforts to strengthen background checks that "went nowhere."

"But there's never been a president like President Trump," he said.

"I have a great relationship with the Republican senators and I really think they're -- they're looking for me to make -- give them a signal," Trump said.

Trump and Senate Republicans are under intense pressure to act in the wake of the shootings, which prompted an outcry over government inaction.

Speaking to reporters on Thursday, McConnell said background checks would be among the measures the Senate would consider after returning from its recess and that it would be "unacceptable" for Congress not to take some action.

Trump's comments outside the White House echoed morning tweets in which he also said he had been speaking with leaders of the NRA "so that their very strong views can be fully represented and respected."

Speaking to reporters, Trump said he is hopeful that the NRA, whose members he called "great patriots," can be persuaded to support "very meaningful background checks."

"I think in the end ... the NRA will either be there or will maybe be a little more neutral, and that would be OK, too," Trump said.

NRA chief executive Wayne LaPierre said in a statement this week that he would not discuss conversations with Trump.

"But I can confirm that the NRA opposes any legislation that unfairly infringes upon the rights of law-abiding citizens," he said. "The inconvenient truth is this: The proposals being discussed by many would not have prevented the horrific tragedies in El Paso and Dayton. Worse, they would make millions of law-abiding Americans less safe and less able to defend themselves and their loved ones."

In a tweet Friday, Senate Minority Leader Charles Schumer, D-N.Y., said that if Trump "needs the NRA's sign off for background checks legislation, it will be nearly impossible to accomplish anything meaningful to address gun violence."

In late February, the Democratic-led House approved the first major new firearms restrictions to advance in a generation. The proposed legislation would amend federal gun laws to require background checks for all gun sales and most gun transfers.

Federally licensed dealers are required to run background checks on people who buy guns, but private sellers who are not federally licensed are not. Under the bill, private parties would have to seek out a federal license to facilitate a gun deal.

The next day, the chamber passed a separate bill that would extend the time for the government to complete a background check on someone trying to buy a gun from a licensed dealer before the sale can go through.

Trump threatened to veto the two bills, saying they do not sufficiently protect the Second Amendment rights of gun owners. Since the weekend shootings, however, Trump has expressed a new openness to considering background checks.

Democratic leaders have urged McConnell to call the Senate back from recess and take up the House-passed bills.

House Speaker Nancy Pelosi, D-Calif., sent a letter Thursday to Trump asking him to use his constitutional powers to force the Senate back into session to vote on the two bills -- a plea Trump dismissed Friday while speaking to reporters.

During the radio interview Thursday, McConnell said the Senate should wait until after its scheduled return from recess to address the issue.

"What we can't do is fail to pass something, you know, by just locking up and failing to pass -- that's unacceptable," McConnell said. "What I want to see here is an outcome, not a bunch of partisan back and forth, these shots across the bow."

Sen Lindsey Graham, R-S.C., who announced this week that he was working on legislation encouraging more so-called red-flag laws in states, is traveling with Trump this weekend and said he would discuss his plans with the president.

Graham and Sen. Richard Blumenthal, D-Conn., are drafting legislation that would provide incentives for states through grants and other methods to enact their own red-flag laws, which are also known as extreme-risk protection orders. These laws allow family members or law enforcement officials to petition a judge to bar firearms access to people deemed potentially threatening.

"Like the guy in Dayton, if you get kicked out of school for threatening your schoolmates, with a rape list and a kill list, maybe you shouldn't buy a gun," Graham told reporters aboard Air Force One. "That's the heart of the matter here."

Some Republicans, though, pushed back on the idea of expanding background checks or approving a red-flag law.

"I want to make sure we protect our constitutional rights and whatever comes up will actually help solve a problem," John Barrasso, the No. 3 Senate Republican, told reporters Friday. "I have a lot of concerns about the due-process component of [red-flag laws] and I don't want to punish law-abiding citizens."

Separately, Sen. Robert Menendez, D-N.J., planned to send letters to the chief executives of Amazon, eBay and Google asking for internal data and better enforcement of their policies after news reports documenting the continued availability of gun parts and accessories on e-commerce platforms that supposedly prohibit their sale.

In the letter to eBay chief executive Devin Wenig, Menendez cited a report in the Los Angeles Times detailing the sale of accessories and equipment clearly intended for use with military-style semi-automatic rifles like the AR-15 and AK-47 in the auction site's marketplace, despite rules against listing such items.

"We write to urge you to immediately implement stronger measures to keep guns and gun accessory sales off your platform," Menendez wrote. "America is in the throes of a gun violence epidemic and it is incumbent upon corporate America to do its part to help end the carnage."

Menendez asked Wenig to respond by Sept. 9 with answers to a list of questions about the technical safeguards used by the San Jose, Calif., auction site to keep sellers from listing prohibited products and the processes it relies on to review flagged listings. He also asked Wenig to disclose how many gun-related listings eBay takes down and how many accounts it suspends per month.

The company has in the past treated that information as proprietary. A 2015 report by the investigative journalism outlet Reveal, also cited by Menendez, found hundreds of listings for assault-style rifle parts for sale on eBay. When the reporter asked for data on flagged products, an eBay spokesman declined, calling it "our secret sauce."

"Effective monitoring and the suspension of accounts in violation of these policies is essential," Menendez wrote. "As such, I have concerns that eBay's efforts are falling short of what is required in light of the current crisis."

Menendez planned to send similar letters to Amazon CEO Jeff Bezos and Google's Sundar Pichai, after a report by The Washington Post revealing recent listings on their sites for products including a 100-round ammunition drum similar to one used in the Dayton shooting. Both companies ban the sale of guns themselves and many gun parts and accessories, including high-capacity ammunition magazines.

Information for this article was contributed by John Wagner, Seung Min Kim, Josh Dawsey, Mike DeBonis, Colby Itkowitz and Paul Kane of The Washington Post; by Zeke Miller, Deb Riechmann, Matthew Daly, Bruce Schreiner and Jill Colvin of The Associated Press; and by Jeff Bercovici of the Los Angeles Times.

Print Headline: For gun bill, Trump confident on his sway