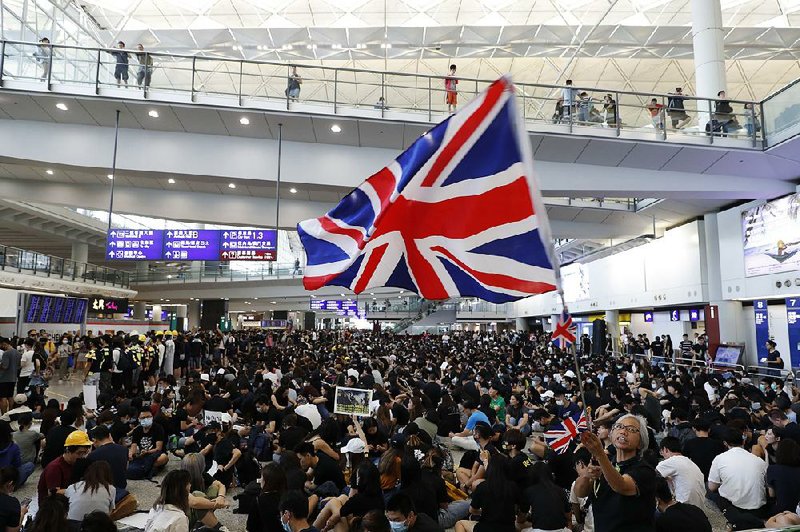 A protester waves a British flag during a pro-democracy demonstration Friday at Hong Kong’s international airport. The protest, a continuation of a two-month-long movement, took place in the arrivals area of the airport and was peaceful, causing no disruptions of flights.

The protest in the airport's arrivals hall, which is planned to last through Sunday, came as Hong Kong reeled from its worst political crisis since Britain handed the former colony back to China in 1997, and less than a week after protests and a general strike caused chaos in the city and led to 148 arrests.

"You've arrived in a broken, torn-apart city, not the one you have once pictured," read a pamphlet that protesters offered to arriving travelers. "Yet for this Hong Kong, we fight. We shall never surrender."

As of Friday night, the demonstration remained peaceful, and there had been no reports of arrests or disruptions of flights. Protesters were careful to leave a path clear for travelers, some of whom recorded the demonstration on their phones or helped themselves to pamphlets.

The protests in Hong Kong began two months ago, in opposition to a bill -- now suspended -- that would allow extraditions to mainland China, where the courts are controlled by the ruling Communist Party. It has since expanded to include a number of other demands for greater democracy.

In recent days, mainland Chinese officials have issued stern warnings to protesters about the risks of continuing their campaign. On Friday night, the Chinese government struck at Hong Kong's flagship carrier, Cathay Pacific, some of whose employees were reported to have supported the protests.

China's civil aviation authority demanded that the airline bar staff members who have supported illegal assemblies or acts of violence from working on flights to mainland China. A Cathay pilot was reported to have been among dozens of people charged with rioting in connection with a recent protest, and more than 1,500 of its employees called in sick as part of the general strike Monday, according to a union representative.

Before the demonstration, several protesters, including employees of Cathay Pacific, stressed it was meant to be an entirely nonviolent way of maintaining the movement's momentum.

Miki Ip, a real estate agent who attended the demonstration, said she came partly to rebut unproven claims by the Chinese government that the civil disobedience had been led by foreign forces who wanted to undermine Beijing's authority.

"China has told us so many lies, and we lack a government that really works in our interests," Ip, 38, said in the arrivals hall. "The living conditions facing youngsters nowadays are harsh, and they feel a lack of ownership over their hometown, both economically and politically."

This week, news media controlled by the Chinese Communist Party accused a diplomat at the U.S. Consulate in Hong Kong, Julie Eadeh, of being behind the protests. A State Department spokesman, Morgan Ortagus, suggested that China had leaked personal information about Eadeh, calling that the act of a "thuggish regime."

On Friday, the Chinese Foreign Ministry's office in Hong Kong responded by accusing the United States of "venomous and unfounded allegations" and "gangster logic."

The stakes are high for the airport protesters, in part because they have not applied for permission to hold the demonstration. That technically makes it an illegal assembly.

The Hong Kong airport handled nearly 75 million passengers last year, making it the world's eighth busiest for passengers, according to Airports Council International. It was also the world's busiest aviation terminal for cargo.

Several other anti-government demonstrations were planned for this weekend around Hong Kong. They include a family-friendly rally in the central business district that the police approved in advance, and three planned marches elsewhere for which permit applications were rejected.

Carrie Lam, Hong Kong's chief executive, appeared at a news briefing Friday evening, flanked by her finance secretary and leaders of the local business community. They appeared to be responding to an earlier call from the Chinese government to stand behind her and oppose violence in the semiautonomous territory.

In her remarks, Lam called for all sectors of Hong Kong society to overcome their differences, emphasizing the harm she said the protests had inflicted on the economy. But she declined to offer new concessions to the protest movement.

"I don't think we should just make concessions in order to silence the violent protesters," she said. 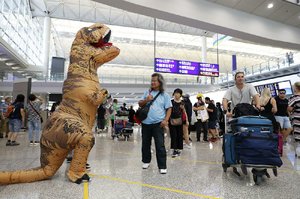 Photo by AP/VINCENT THIAN
Tourists approach a protester dressed as a dinosaur at the airport in Hong Kong, where thousands of pro-democracy activists gathered Friday.