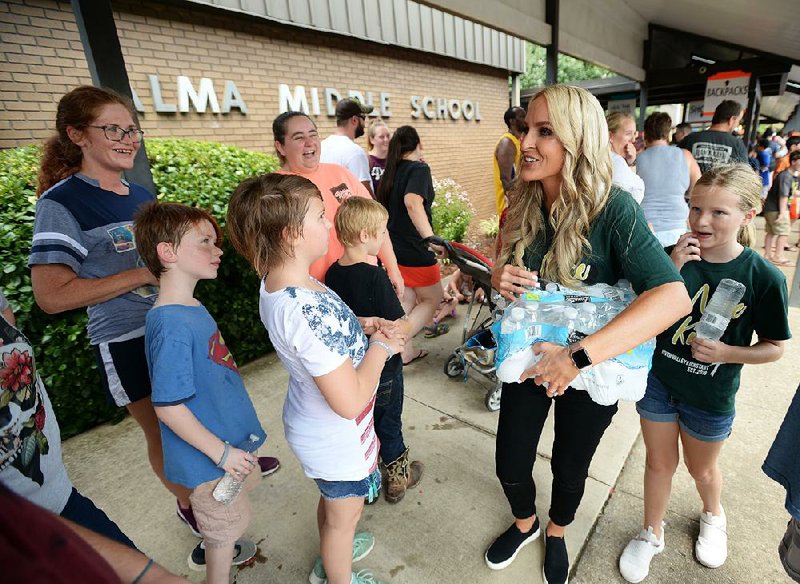 Carrie Jernigan and her 9-year-old daughter, Harper, (right) hand out bottles of water Saturday as people wait in line to enter the River Valley Kickstart event at Alma Middle School. More photos are available at arkansasonline.com/811shoes/

ALMA -- Carrie Jernigan was terrified Saturday that she would run out of shoes.

But there were at least 1,000 people in line waiting for shoes. And there were four more hours to go.

Jernigan was orbiting the River Valley Kickstart on Saturday to make sure everything went according to plan.

Her daughter was the inspiration for the back-to-school shoe giveaway, which was held at Alma Middle School.

While shopping in May at a Payless Shoe store's going-out-of-business sale, 9-year-old Harper Jernigan asked her mom if they could buy a pair of shoes for a needy boy at her school.

Moved by her daughter's kind thought, Carrie Jernigan bought out the entire store -- 1,500 pairs of shoes.

From there, everything snowballed, culminating in Saturday's event, where there were 2,100 pairs of shoes, 5,000 pairs of socks and 1,000 backpacks to give away. There were also free books, eye exams, dental exams, haircuts and 3,500 gift cards from Sonic, McDonald's, Chick-fil-A and Taco Bell.

"I didn't expect any of this," said Jernigan. "One act of kindness from my daughter spurred me into going one step further, and now look at this. I know of multiple events across the nation happening today based upon what's been on the news. People are hungry for a happy news story."

Jernigan wanted to give away the shoes, but at first she didn't know how to go about doing that.

[Video not showing up above? Click here to watch » https://www.youtube.com/watch?v=Jen4teOTWDQ]

"I just needed a place on the side of the road to give these away," she said.

On July 22, she posted on Facebook that she had shoes for a back-to-school giveaway. That afternoon, she heard from Lee Denton, the pastor of Kibler Baptist Church, where the Jernigans attend services. Area churches were planning a backpack giveaway, so they decided to join forces.

A television station aired a story, and the news spread quickly around the world. Carrie and Harper were whisked away to New York City to appear Aug. 1 on ABC television's Good Morning America.

"When I posted that, my Facebook page wasn't even public," said Carrie Jernigan. "Somebody messaged me right off and said, 'Can you make that shareable?'"

The generosity was contagious.

Staples donated $30,000 in school supplies. A GoFundMe.com fundraiser took in $2,472 to buy more shoes. Bekaert Corp. gave $2,000. Ed Yeager of Yeager Ace Hardware in Fort Smith and Van Buren walked up to Jernigan and gave her $1,000 to buy things for the children. About 25 businesses said they would contribute items or free services.

Some of the Staples donation is still on the way and will be distributed to kids later.

By 6 p.m., she said, the sneakers were all gone, but other shoes and sandals were still available, and people were still arriving.

Kayla Price, 12, of Van Buren got a pair of Champion sneakers at the event. And socks covered in avocados.

"I think it's very generous of the person who bought all these shoes to go out of her way to help kids," she said.

Carleen Hanna, a volunteer working at the tissue table, said she bought 100 notebooks to give to kids.

"I've got twin great-grandchildren in line out there," she said. "This is going to be a shopping experience like they've never had, and they'll never forget it."

Jernigan and her three kids have a motto that they recite every day when she drops them off for school: "be nice and kind." Those four words were on the front of the green T-shirts that volunteers wore to the event Saturday.

"Everybody wanted to do something," said Donna Martin, wife of Alma Mayor Jerry Martin. "I think we had to turn people away for volunteers because we had so many."

Denton said the churches had planned a much smaller back-to-school event in which they would take 400 backpacks to the schools to give away. Then Jernigan bought out the Payless store and a wave of generosity swept through the community in the 18 days preceding the event.

"It snowballed so fast," he said "One act of kindness and people started jumping on board. Thousands of people showing up. Hundreds of volunteers. This is just a huge event for the River Valley."

Jernigan is a lawyer and president of the Alma School Board.

"I started kindergarten here," she said. "I played in this gym. This is where I graduated. I serve on the School Board. My heart is with this community, but Alma is my school. It's my home."