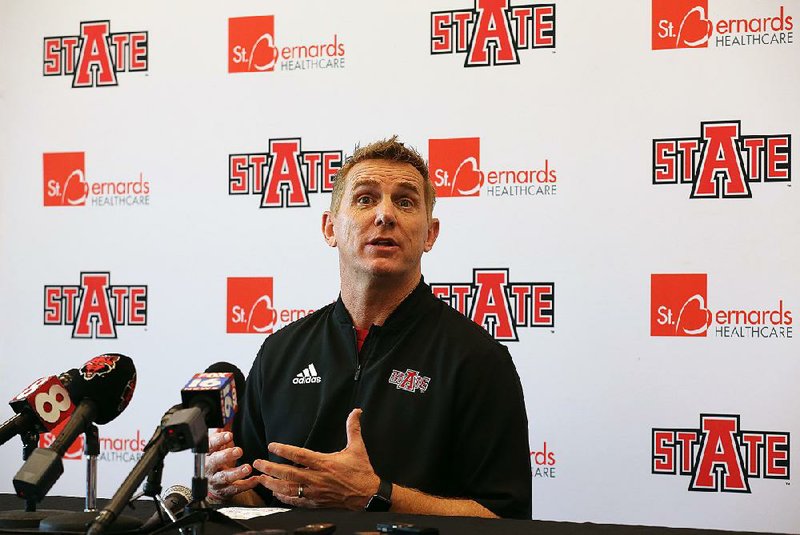 After Arkansas State University's first scrimmage of fall camp Saturday at Centennial Bank Stadium, the sixth-year head coach made it clear his Red Wolves aren't anywhere near his expectations yet.

"I thought it was kind of hot and cold," Anderson said of the scrimmage. "We're not a very good football team yet, but there's some positive signs. It's a good test halfway through."

The Red Wolves made plenty of mistakes Saturday, but that's to be expected after one week of August practice.

There were a few dropped passes, including a big one by senior wide receiver Dahu Green, who got by junior cornerback Demari Medley on a go route before dropping what would have been an easy touchdown.

Freshman kicker Tristan Mattson missed two field goals -- one wide left, the other wide right -- during special-teams work. The defensive line committed multiple offsides penalties, the offensive line struggled at times to get some push, and the offense gave the ball away twice.

All are fixable mistakes, but Anderson said what he wants to see is more effort out of his team as training camp progresses.

"I think we've been sporadic with our effort," he said. "We talked a lot about what the standard is, and we're still trying to get it. I won't really know until I watch the tape. It felt good on the field."

Junior quarterback Logan Bonner, who opened training camp at the top of the Red Wolves' depth chart, received all of the first-team reps Saturday.

He was sharp at times, especially in the short passing game. Anderson said he looked the most comfortable with the offense out of all the quarterbacks. But Bonner also made some costly mistakes, including forcing two throws into coverage that were picked off, and nearly having a third intercepted.

Junior linebacker Tajhea Chambers nearly returned one for a touchdown before being tackled by senior wide receiver Kirk Merritt. Later, junior cornerback Jerry Jacobs picked one off near the red zone.

Bonner was critical of his outing.

"Not very good, not the best you can do," Bonner said. "I thought we came out flat, including me. It's my job to get the guys going, and we didn't. It starts with me."

Senior Carson Coats and redshirt freshman Layne Hatcher, who transferred from Alabama, split most of the second-team reps. Freshman Coltin Clack also saw some snaps. Anderson said there hasn't been a ton of separation in the quarterback room behind Bonner.

The offense played with plenty of tempo throughout the scrimmage, something that was a point of emphasis by Anderson and first-year offensive coordinator Keith Heckendorf heading into camp.

"It was good at times," Anderson said. "It got a little bit sloppy towards the end. We tried to push the tempo. I thought the early part of the scrimmage the offense did a good job of clicking. As we got later, the defense started playing better on third down."

First-year defensive coordinator David Duggan's group made critical stops while not allowing a touchdown. Senior cornerback B.J. Edmonds made a nifty pass breakup while covering Green down the field that prevented a big play.

Some mental lapses and offsides penalties persisted, but the defensive line got a fair amount of pressure and produced multiple sacks. Junior defensive end William Bradley-King impressed with two sacks and a forced fumble.

"I feel like the defense looked better today," Bradley-King said. "We took a step forward today. We're just back to the drawing board. We got to see what we need to work on to be great."

ASU's next scrimmage is set for Saturday at 6 p.m. The Red Wolves' season opener is Aug. 31 against SMU at Centennial Bank Stadium.