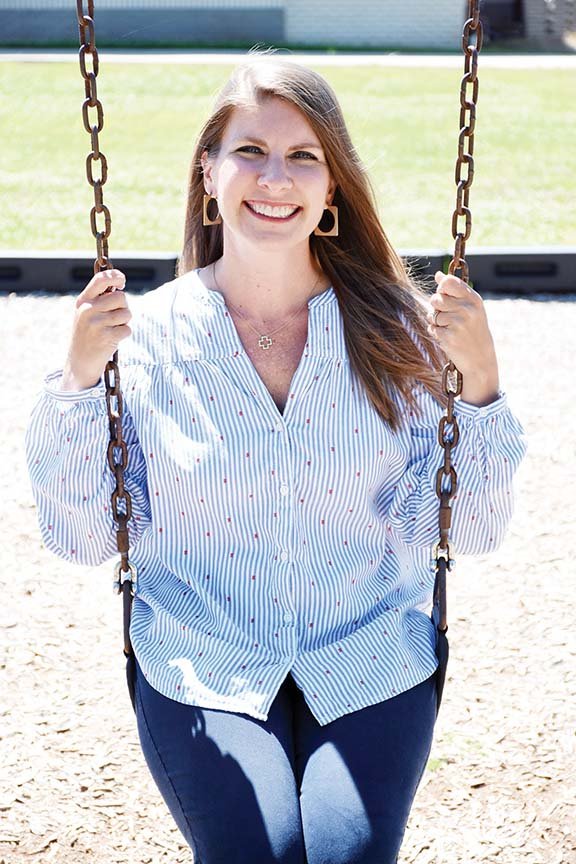 Melissa Spence sits in a swing on the Theodore Jones Elementary School playground in Conway, where she teaches first grade. Spence, the Conway School District Teacher of the Year, was named one of four state semifinalists for 2020 Arkansas Teacher of the Year. She said the announcement was “surreal” and “mind-blowing.” ( Staci Vandagriff)

CONWAY — Melissa Spence said she grabbed her husband’s hand at the table in the Governor’s Mansion when she realized she was being named one of four semifinalists for 2020 Arkansas Teacher of the Year.

The Conway School District Teacher of the Year was one of 15 regional finalists who were honored Aug. 1 at the Arkansas Governor’s Mansion. Then she was named one of four.

“It was really special; my mom was there — she came from Oklahoma — and my husband, my principal, our instructional facilitator and my superintendent,” she said. “Just to look around that table and see the people who have been right there supporting me from day 1 of this journey — that was really nice.”

Spence, who teaches first grade at Theodore Jones Elementary School, said she looked over at her husband when her name was being announced, and he was crying.

“He’s filled with joy and excitement and really proud,” she said. “We just support each other so much; we’re a team in life.”

Spence said she was also emotional.

“The tears well up in your eyes, and you have to still hold it together to go up there and get the actual certificate and medal,” she said. Spence also received a $1,000 check as a regional finalist and an additional $1,000 as one of four semifinalists.

Spence is on the same trajectory as her Theodore Jones Elementary co-worker Randi House, who was named 2018 Arkansas Teacher of the Year. House’s tenure ended in June.

“The commissioner of education, [Johnny Key] — I thought it was really sweet what he said when I went up there that first time,” Spence said. “‘What are y’all doing at your school?’ he asked.

“He knows Randi came from there, as well. Who would have thought?”

On Sept. 25, a team from the Arkansas Department of Education will observe Spence teaching in her classroom, and she and her principal will be interviewed separately.

“I’m going to definitely give that some good thought, as far as the lesson goes, and make sure I have the best interactive, engaging lesson so the kids can be successful,” Spence said. “I know it’s about watching me teach, but they’re also watching how well the kids are interacting with each other … and how they can do the task.”

The 2020 Arkansas Teacher of the Year will be named this fall.

In the introduction before Spence was announced as a top-four semifinalist, 2019 Arkansas Teacher of the Year Stacey McAdoo said Spence makes a lasting impression on everyone she knows, is creative, innovative and “went to the drawing board” for her Clue Buddy Crew project.

With the words “drawing board,” Theodore Jones Principal Tammy Woosley said, she knew it was Spence.

“That’s what she and her husband do together,” Woosley said.

Spence and her husband, Jeff, a freelance illustrator, create graphics for school projects and work together on programs Spence has initiated. Clue Buddy Crew is a visual-clue-based phonics program using cartoon characters drawn by her husband.

Spence started the Morning Walking Club, for students at the school, and the Schoolin’ Summer program, in which she and other teachers go to neighborhoods for four weeks when school is out to take fun lessons and books to students. She also initiated Sunday Snuggle Stories, for teachers to video themselves reading books and post the videos to Facebook on Sunday nights.

“One of my favorite things to do is recognize teachers when they do something innovative or step outside their everyday roles,” Woosley said. With all the extra projects Spence does, “there was no way to adequately recognize her. Now the state can see why she’s truly deserving of being in the top four.”

Each regional finalist had to create a centerpiece for his or her table at the Governor’s Mansion. Spence said she and her husband created a handmade replica of Theodore Jones Elementary School out of materials such as foam core, poster board, newspaper and papier-mâché.

“We wanted to make it custom and represent our school, … and it’s supposed to represent you,” she said.

The school had windows showing different programs Spence has started, including a photo of her reading one of the Sunday Snuggles stories and children walking on the track as part of the Morning Walking Club.

The school had little flags that represented her background: one with a Stuttgart

Ricebird, representing her hometown; one each for Arkansas Tech University and the University of Central Arkansas, where she earned her degrees; a Wampus Cat flag; an Arkansas state flag; and an American flag. A billboard on top of the building had a photo of Spence and her husband and their dog, Bizzy.

The base also included ripples to represent her belief that teachers create a ripple effect. In the video she made in her application for regional finalist, she talked about The Power of a Teacher.

“What you do in the four walls of your classroom has a ripple effect … to the community, the neighborhood and even the world,” she said.

Spence, who lives in Vilonia, said being named a finalist for Arkansas Teacher of the Year is especially meaningful for someone who didn’t originally intend to be a teacher.

Although Spence’s mother, Gail Shrum, is a retired teacher and elementary principal — and a former Stuttgart Teacher of the Year — Spence first majored in marketing and management. She worked at a printing service in Stuttgart.

“I just knew something was missing, and I wanted to be able to give back, make an impact,” Spence said.

She earned her teaching certificate and started teaching in Mayflower before getting a job in the Conway School District. This will be her fourth year to teach first grade at Theodore Jones.

Spence said that as she and her mother walked to the car after the event at the Governor’s Mansion, she said, “I just can’t believe it.”

Spence said her mom said, “I can’t, either.”

“It’s surreal, mind-blowing, so many emotions,” Spence said. It’s amazing because this is not the career path I set out to do, but I think [my marketing

experience has] definitely given me skills I’ve used in this profession that opened my eyes.”

She said getting to experience her mother’s career in education made her appreciative of teaching and administration.

“It does take teamwork,” she said.

And Spence thinks her team is the best.