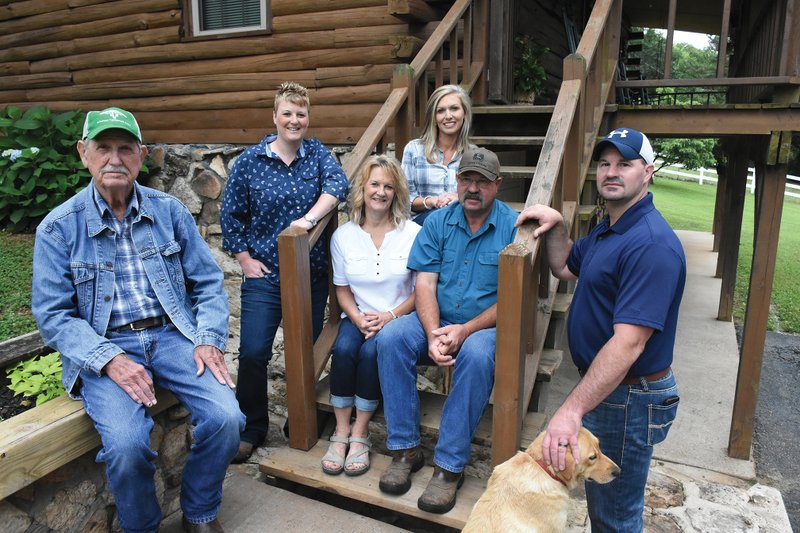 CUSHMAN — Kenny Hurley said it is “a great honor” for his family to be selected as 2019 Independence County Farm Family of the Year.

“I was kinda shocked, really. It seems most of the time it’s the big row-croppers who are recognized instead of the little farmers like me.”

Kenny, 60, and his wife, Edwina, 58, have two adult children — a son, Chris Hurley, 38, and his wife, Kaila; and a daughter, Brittany Hurley, 33. They farm 1,055 acres. They operate a cow/calf operation of 139 head of crossbred cattle and precondition 40 head of cattle on feed. They also raise 280 acres of soybeans, which they sell at harvest, and 225 acres of hay.

Kenny was born and raised in Cushman, a son of Sam Hurley and the late Mary Jo Hurley. He has one sister, Debbie Covington of Cushman.

“I’ve lived here all my life,” he said, laughing. “I graduated from Cushman High School in 1977 and went right to work. My summer jobs in high school were always working on a farm. My dad had cattle and I worked for other people, too. I worked in construction, too. I’ve done it all.

“Dad had a propane-gas business, so I worked in that with him,” Kenny said. “We had that for about 25 years. After we sold that, I went into farming full time.”

Kenny and Edwina have been married 42 years. Edwina is a daughter of Sybil Bishop of Batesville and the late Otto Bishop. Her family is originally from Winslow in Washington County.

“My parents raised chickens,” she said. “We also raised cattle and hogs just for us.

“My dad also opened the first Sonic [Drive-In] in Batesville,” she said, adding, “That’s where Kenny and I met.”

Kenny and Edwina have been farming full time for 11 years.

Kenny said that after his dad sold the gas business in 2008, “a neighbor got sick and had to sell his cattle.

“I bought his cattle and leased his farm,” Kenny said. “In a few years, I was able to lease another farm and increase my herd.

“In 2011, when we were looking for a place to cut hay, a friend and I found 350 acres of river-bottom land. We partnered to raise soybeans and hay.”

In addition to farming, the Hurleys own Hurley Liquid Feed, which sells a liquid feed supplement for cattle.

“This business allowed me to see other farms and cattle operations, and the sale of this product allows me to offset the cost of my feed,” Kenny said.

“We have built a working cattle pen with a sweep gate, removed old fences, overseeded the pasture and sprayed for weed control,” Kenny said of their achievements on the farm.

“We lost most of our pasture grass and our hay grass,” Kenny said. “Plus, we had lots of weeds. It took a long time of reseeding and spraying weeds to rebuild.”

Kenny said the family hopes to add equipment such as a grinder/mixer and install feed bunks to increase the number of preconditioned calves. He also hopes to build another hay barn.

Kenny said he works to protect the environment and conserve soil, water and energy on his land.

“A lot of my pasture land is steep, and in the valleys where the water has cut ditches, [the land] has overgrown with brush,” he said. “I am working on clearing out and building terraces to hold back heavy rain water and allow time for it to soak in the ground.”

Kenny said the couple’s children work full-time jobs but help in hay season and with working the cattle. He said their son, Chris, works in the lab at Future Fuel Chemical Co. in Batesville, and their daughter, Brittany, works at LifePlus International, also in Batesville.

“My wife does all of the bookwork and checks cows when I’m in the hay or soybean field,” Kenny said.

Kenny served 10 years on the Cushman School Board, from 1999-2009. He was elected to the Independence County Quorum Court as a justice of the peace in 2013 and continues to serve in that capacity. He is chairman of the Parks and Recreation Committee and a member of the Law Enforcement Committee and the Budget Committee. He is also a member of the Arkansas Cattlemen’s Association.