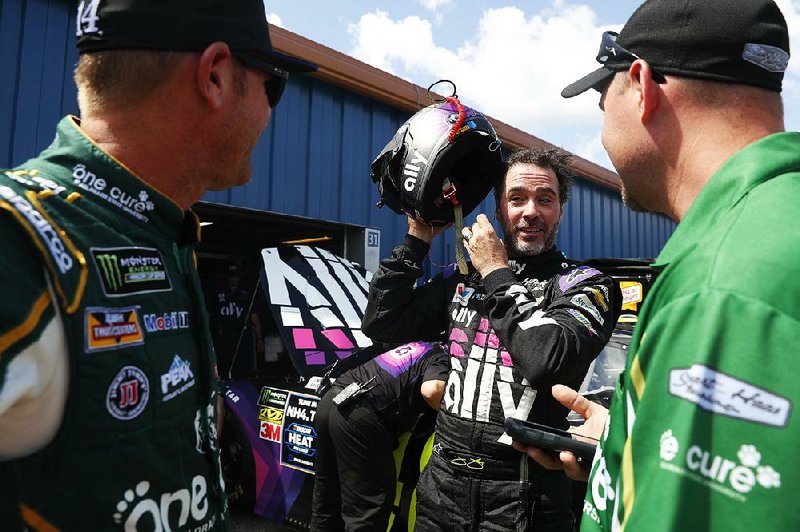 Jimmie Johnson (center) talks with Clint Bowyer (left) during practice for today’s NASCAR Monster Energy Cup race in Brooklyn, Mich. Johnson, who starts 12th in today’s race, is still upset at Ryan Blaney for making contact with him in a turn that caused him to spin out last week at Watkins Glen.

BROOKLYN, Mich. -- NASCAR Monster Energy Cup Series drivers are pushing limits on the track and pointing fingers off it as tensions rise with four races left before the playoffs begin.

Kyle Busch was summoned to the NASCAR hauler at Michigan International Speedway to talk with officials -- along with William Byron and Bubba Wallace -- after sparring with both drivers at Watkins Glen.

Scott Miller, NASCAR's senior vice president of competition, said he also had conversations with Jimmie Johnson and Ryan Blaney about their on- and off-the-track feud that has lasted nearly a week. Miller said he didn't attempt to bring Johnson and Blaney together to hash out their differences.

"I think they're man enough to sort that one out between themselves," Miller said Saturday. "The other stuff with the other drivers kind of escalated a little bit to more retaliation."

Brad Keselowski will start Sunday from the pole position and in front of Kevin Harvick, Byron, Alex Bowman, Clint Bowyer and Chase Elliott in today's Consumers Energy 400 at Michigan.

Busch, the points leader, will begin 24th in the 38-car field.

Johnson qualified 12th and is desperately hoping to be in the 16-driver playoffs. The seven-time champion is tied with Ryan Newman for the 16th and final spot in the playoffs. Since the series created the postseason format 15 years ago, Johnson has earned a spot each time.

Miller acknowledged he can't really answer the question of what's fair and what crosses the line in terms of aggressive driving with so much on the line.

"Everybody wants to know. We would like to know as well," Miller said. "It's one of those things where every incident like that, you have to take into the context of what it is. It's almost like when your kids act up, every situation is not the same. That's kind of the way it is with the drivers and the situations."

While it is rare in the series, NASCAR can suspend drivers.

NASCAR hasn't done that for Cup races since suspending Matt Kenseth for two races in 2015 for wrecking Joey Logano at Martinsville in an act of retaliation that carried heavy championship consequences.

It doesn't appear that any of the recent spats will lead to harsh penalties unless they escalate out of control.

Johnson said he wants Blaney to apologize for making contact from behind going into a turn, leading to him spinning out last Sunday at Watkins Glen. Blaney insisted he's not going to say he's sorry, and NASCAR officials seem to be on his side.

"That one was, to us, was completely a racing incident," Miller said. "I think they both think something different about that."

Likewise, Busch has a different take than Byron and Wallace after making contact with both drivers in the previous Cup race.

Busch spun while racing for position against Byron. Later, Busch retaliated by knocking Byron into the grass. Chad Knaus, Byron's crew chief, told Byron, 21, over the team radio not to be pushed around by Busch, and he responded by ramming into the back of the former series champion's car.

In the same race, Wallace spun Busch. Later, they banged each other while racing before Wallace had the last tap, turning Busch around entering a turn.

The drama has generated some extra attention, and it's not necessarily bad publicity for a sport that craves it.

"If you draw a parallel to another sport, I don't think the pitcher that throws at a batter's head are friends," Miller said. "It's probably not a bad thing for the game that there's a little bit of tension and a rivalry. Rivalries are good for all sports."