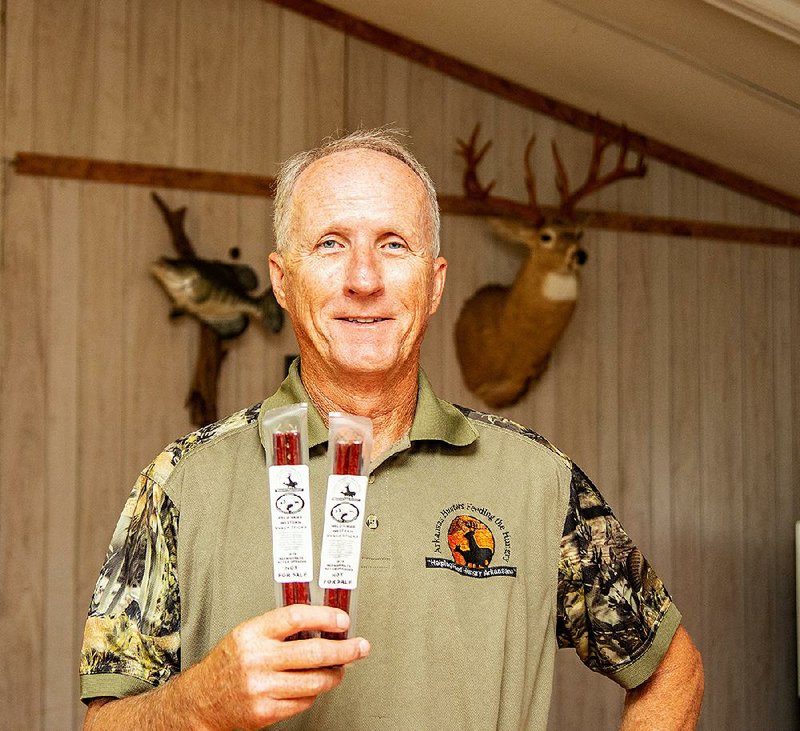 Ronnie Ritter, director of Arkansas Hunters Feeding the Hungry, holds venison snack sticks. Last year, the organization worked with hunters to provide 88,000 pounds of deer meat to food pantries, but Ritter says there is an opportunity to do a lot more.

"Jeez. That was a record year," says Ronnie Ritter, director of Arkansas Hunters Feeding the Hungry. "I am still analyzing the data. I thought 'Where did all of this come from?'"

Last year's amount far exceeds the 3,000 pounds of deer meat donated in 2000 -- the organization's first year in existence. But is only a fraction of the pounds of deer killed each year by hunters in Arkansas.

The organization's mission is simple: Provide protein to the hungry. According to its website: "With the growing number of deer in Arkansas and very liberal bag limits hunters can make a real difference in helping feeding agencies across the state. Feeding agencies have a difficult time obtaining meat or protein and that's where you can help. We provide the deer burger at 'no cost' to the agencies but do have to raise money to pay for processing costs."

Hunters Feeding the Hungry works with about 70 meat-processing companies across the state to turn the deer into ground meat. The processors have agreed to do the processing at a low -- or sometimes -- no cost.

Hunters can donate a field-dressed deer to any of the processors. The ground meat will then be frozen and distributed to food banks and other locations.

"The processors are the backbone of what we do," Ritter says. "If they didn't help us on the cost, it would be hard for us to do what we do."

Terri Berry, owner of the Buck Stops Here in Sherwood, got into the meat processing business in the mid-1990s as a way to earn money for Christmas. She laughs when she says she is still in the business.

She likes working with Hunters to Feed the Hungry because the proceeds stay in the local community.

"There are so many things you can donate to, but the money could go anywhere," Berry says. "With this, you know where it is going. It's feeding people right here in the community."

Last year, the Buck Stops Here processed about 4,000 pounds of meat for the organization. Her goal for this year is 5,000 pounds.

Joey Hutchinson is co-owner of Kruse Meat Products in Alexander with his mother, Jeanne Hutchinson. The company is named after his grandfather George Kruse, who was in the meat processing business for many years.

Hutchinson said a lot of hunters do not want to shoot does because they do not want to pay to process the meat. Donating a doe helps control the state's deer population, he says.

Through Hunters Feeding the Hungry, Hutchinson says he is able to "help a lot of people in this area who are hungry. There are a lot more people who are hungry than we ever thought. And meat is the most expensive thing on the dinner plate."

Ritter estimates a quarter-pound of deer meat per serving. Using that calculation, the 88,000 pounds donated last year adds up to 352,000 servings.

Mark and Linda Reynolds are directors of a food pantry at Crossgate Church in Hot Springs. Mark Reynolds says his clients would not receive meat without Hunters Feeding the Hungry. The pantry provides hungry Arkansans with a box of food that includes canned goods and shelf-stable items such as macaroni and cheese.

"Ronnie really helped. Otherwise, we would not meet our church budget and the people we serve wouldn't have any meat at all," he says.

It costs Hunters Feeding the Hungry about $1 per pound to process the deer meat. To raise the funds, the organization receives grants and contributions from businesses. But the majority of the funding comes from donations made by hunters or fishermen when they buy licenses from the Arkansas Game and Fish Commission.

When buying a license, hunters and fishermen have the option of donating $1, $5 or $10 to Hunters Feeding the Hungry. Ritter says about 75% of the organization's funds come from those donations.

New this year is the organization's Woods to School deer snack stick program. Some of the donated deer meat is taken to a processor in Missouri and turned into about 20,000 packages of jerky sticks. A bit of pork is mixed in to improve the taste. The snack sticks were delivered to 14 Arkansas schools last year and Ritter hopes to add more schools.

"You have to put a little fat in deer to make it have a little bit of taste because it is so lean, which is good and healthy," Ritter says.

Ritter has been heading up the organization for about seven years, starting after he retired from International Paper where he worked on hunting leases on IP land. A hunter himself, Ritter says Hunters Feeding the Hungry is a natural fit for him.

Ritter is also involved in mission work and has visited many poverty-stricken countries.

"I'm just passionate about helping people because I have seen that most Americans are so blessed. I wish every person could go to a third-world country and see the poverty and the desolation. ... I just have a passion about helping people, especially people who can't help themselves."

More information about Arkansas Hunters Feeding the Hungry can be found at arkansashunters.org. Ritter can be reached at ronnieritter@yahoo.com. 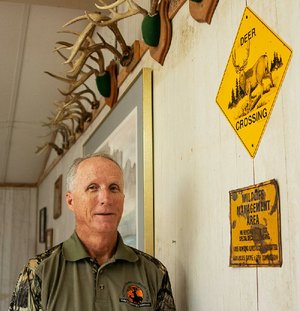 Photo by Arkansas Democrat-Gazette/CARY JENKINS
Ronnie Ritter, director of Arkansas Hunters Feeding the Hungry, works with about 70 meat-processing companies across the state to turn donated deer into ground meat. Without the meat, many food banks would not be able to provide protein to hungry Arkansans, he says.