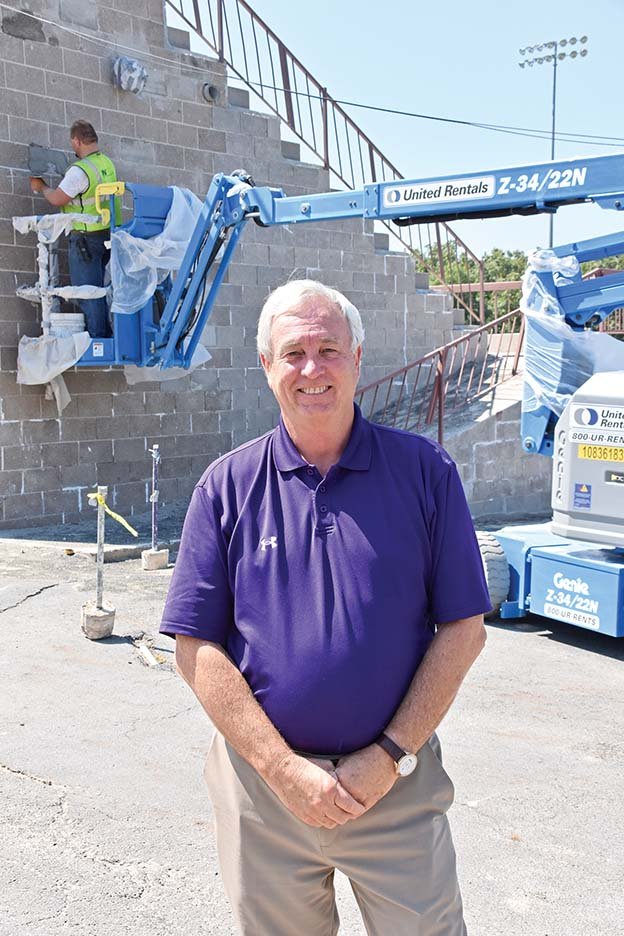 Mayflower Superintendent John Gray stands in front of the home football bleachers that are undergoing renovation for this fall. The work is part of a $5.65 million project to upgrade athletic facilities in the school district. Voters approved extending a debt-service millage to fund the project, which includes a new field house. ( Staci Vandagriff)

Football fans in Mayflower will watch the games from updated bleachers this season as part of a $5.65 million project to upgrade athletic facilities in the school district.

Mayflower Superintendent John Gray said the first step is to renovate the home bleachers, which will cost approximately $190,000. The home side will eventually will be the visitor’s bleachers.

School-district patrons in February voted to extend the district’s 15.5 debt-service millage for another 13 years to fund a new field house, install synthetic turf on the football field and resurface the track. Parking improvements will be made, too.

$3.5 million. Work will begin on the project after the 2019 football season and will include home seating, stadium restrooms, Eagle and visitor lockers rooms, a weight room, a training room and coaches’ offices.

Gray said the plan by Jackson Brown Palculict Architects of Little Rock has been revised. The original plan called for the field house to be built under the bleachers — with visitor’s bleachers on top.

However, the field house will be built at the practice field.

“We’ve made a change in design to be more efficient with our money,” he said. “It was cheaper for us to do [the field house and bleachers] separately.”

The current concrete bleachers are being refinished, painted and repaired, “and aluminum seats put on top of the concrete,” Gray said.

After this football season, the visitor’s side bleachers will be rebuilt for use as the home side.

“We’ll take out the visitor’s bleachers, which only hold a few hundred, to put in something to hold over 1,000,” he said.

The district gained an indoor practice facility with revision to the field-house plan.

The artificial turf will be installed in the spring for use in fall 2020, he said.

Pat Raney, school board president, said the hope was to get the football field ready for this year’s seniors to get to use it.

“We were hoping they would be the first group to use this facility,” he said of the senior players. Instead, “they get the distinction of being the final team on the old facility. There’s a lot of traditions and history there.”

Raney said the architects and Van Horn Construction personnel talked about the order in which the project needs to be done.

“The [field-house] facility needs to be done, then the field and then the track. We said, ‘Let’s get this right.’ We want it to be nice; we want it to be functional,” he said. “We’re trying to get the most for the money and what we need long-term.”

Raney emphasized that the turf field will be used by the band, too, and the field house will be available for other sports.

“It is being built for everyone, not just for the football team,” he said.

“The improvements will make us one of the top facilities in Class 3A,” he said, adding that the indoor practice facility will be one of the larger — if not the largest — in the conference.

Gray said the district has focused on academics for the past 12 years, so it is time to upgrade the athletic facilities.

“We’ve let our athletic facilities slide,” he said in an earlier interview.

The field house and track were built in the 1970s, he said, and the track is “very, very worn.” That makes it unsafe to hold track meets. Resurfacing the track will give Mayflower a chance to host a district track meet, Gray said, and lighting will be improved around the track as well.

The superintendent said the entire project will be an

economic-development boost for the city. Gray said the facilities will not only be used by students and staff; he believes having better facilities might attract more people to Mayflower.

Raney said he is amazed at how many Mayflower residents walk on the track.

“That’s the thing — we’ve built a new elementary, we built a new middle school, and we’ve added our tornado shelter,” he said. “It’s time to upgrade the athletic facilities, and it won’t be just athletics. So many things can go on on this multisurface field and track.”

Raney praised the cooperation among all parties involved in the project.

“Our administrators, coaches, architect and construction managers have all worked together to get this done right, in order, put into code, making sure it’s what we need. And still, we’re doing that around the normal activities of the school year,” he said.

Raney said that most of all, he is thankful for “the great folks of our community who believed our kids deserved the best and approved this project.”

Senior writer Tammy Keith can be reached at(501) 327-5671 or tkeith@arkansasonline.com.