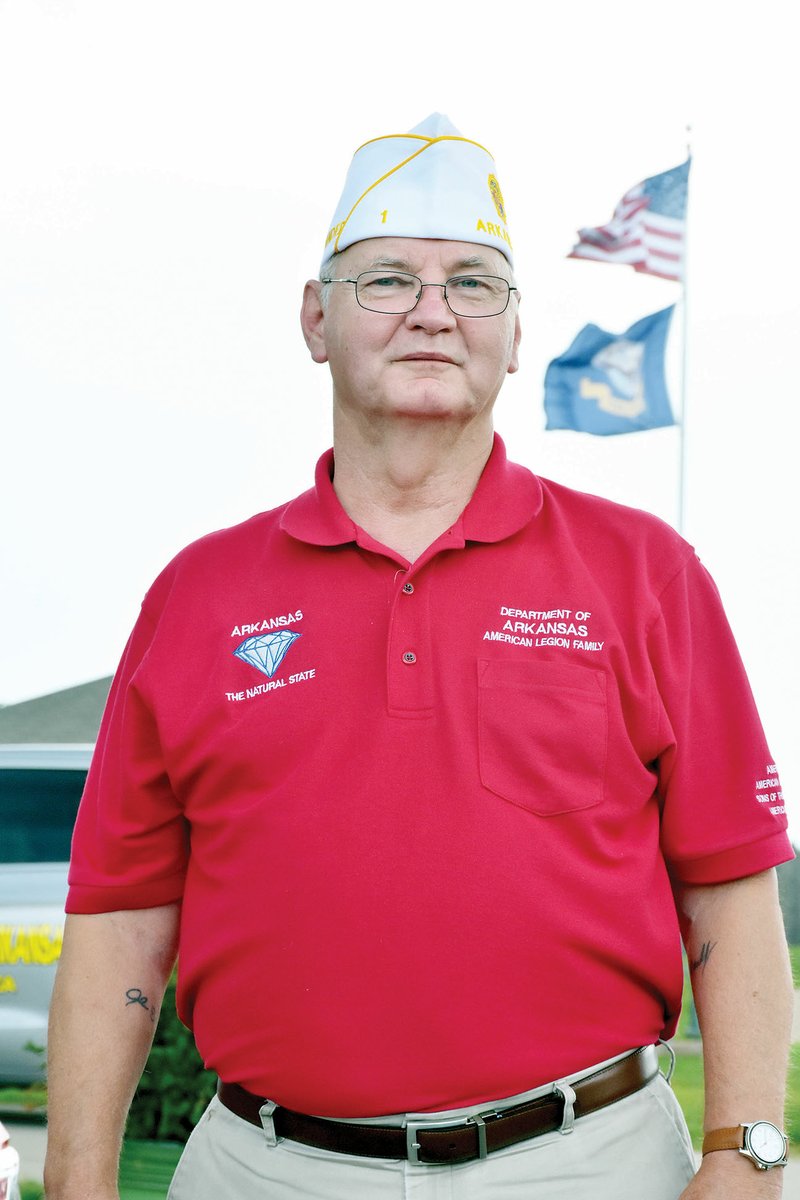 Doyle Batey of Beebe is the new commander of the American Legion Department of Arkansas. Elected in June, he will spend the year traveling the state and visiting with members of more than 100 American Legion posts across Arkansas. ( Staci Vandagriff)

Doyle Batey has a heart for veterans. He is a 20-year Navy veteran himself and knows the needs of his fellow veterans.

Batey, 70, is the new state commander of the American Legion Department of Arkansas. He was elected June 23 at the 101st Arkansas Department State Convention in North Little Rock.

In his role as state commander, Batey said, he will travel across Arkansas, encouraging members of the state’s various posts or chapters.

“This has been a big year for the American Legion,” Batey said. “We are celebrating our 100th anniversary.”

Arkansas celebrated the event during its state convention in June, including a parade on June 22; individual posts have held various activities as well.

According to the website legion.org, the American Legion was chartered by Congress in 1919 as a patriotic veterans organization. Today, membership is said to be approximately 2 million in more than 13,000 posts nationwide, with the posts organized into 55 departments — one each for the 50 states, along with the District of Columbia, Puerto Rico, France, Mexico and the Philippines.

The American Legion began its 100th anniversary at the national convention in August 2018 and will continue the celebration through Veterans Day in November.

“He was an outstanding adjutant, and I look forward to working with him as department commander during the coming year. He has a good sense of humor and is a great person to work with and to work for,” Minor said.

“He wants to do what is right, and he likes helping veterans. He will do anything and everything he possibly can to help a veteran,” Minor said. “Doyle served as deputy director of the Arkansas Department of Veterans Affairs prior to coming to the American Legion, so he knows the VA rules and regulations better than anyone I know. This makes him uniquely qualified to help veterans and active-duty military [personnel].

“I know he’ll do a great job as state commander, leading our organization into our second century of service.”

Originally from Blytheville, Batey took a circuitous route to enlist in the Navy. An overdose of antibiotics as a child left him deaf in his left ear and nearly cost him a career in the military.

“I grew up around the [Blytheville] Air Force Base. I dreamed of being in the Air Force … being on those airplanes. … I tried to enlist in the Air Force, but the recruiter turned me down,” Batey said.

“I went to the Navy recruiter, who gave me an early entry … 120 days to enter. My hometown gave me a going-away party. I went in to start the induction process. … They sent me down for my physical … and they rejected me,” he said, referring to his hearing loss.

“I’ve been able to fly in an Air Force trainer. … I retired as the highest enlisted officer possible,” he said. “I worked on the F-14 Tomcat aircraft … the one Tom Cruise flew in Top Gun. I was there when they filmed that movie. That second lieutenant that allowed me to enter the Navy, despite my hearing loss, did me a favor. I’d like to tell him, ‘You changed my life.’ … I’ve been able to travel … to live my life’s dream.”

Batey graduated from Blytheville High School in May 1998 and enlisted in the Navy in February 1969 during the Vietnam War, although he never served in Vietnam. He served in the Navy honorably for 20 years, retiring in April 1989. He attained the rank of master chief petty officer and served on four aircraft carriers and in six aircraft squadrons. Most of his time in service was working on the Grumman F-14 Tomcat aircraft, part of the cadre of Navy personnel who introduced the F-14 to the Navy fleet.

“I went into the Navy as an E-2,” Batey said. “During my delayed entry time, I got married.

“I progressed on up to E-9, retiring at the top grade for an enlisted officer. I’ve been blessed.”

His last assignment was at Millington Naval Base near Memphis, Tennessee.

“I was the assistant training officer,” he said. “It was a good assignment. I had told Debbie if she would agree to 20 years in the military with me, I would retire after that. It was time for me to retire and spend more time with my family.”

Batey parlayed his military experience into a civilian career that reflected his concern for his fellow veterans.

He managed the men’s clothing department at the Little Rock Air Force Base Exchange in Jacksonville from 1998 to 2004.

“I especially took an interest in helping members of the military and their families with [purchasing] their medals and ribbons,” he said.

That job led him to the Arkansas Department of Veterans Affairs, where he served in several capacities from 2004 to 2010, including as deputy director from 2006 to 2010. He worked veterans’ claims and represented veterans at the Board of Veterans’ Appeals and had the responsibility for two veterans homes and two state veterans cemeteries.

Batey left his job with Veterans Affairs to serve veterans in another capacity. In August 2010, he became the adjutant for the American Legion, Department of Arkansas.

“The adjutant handles all of the paperwork for the Legion,” he said, adding that he was also appointed by the governor to serve as director of the Arkansas Veterans Child Welfare Service Office during that time. “I served seven years at the state adjutant.”

Batey is married to his high school sweetheart, the former Deborah Jan Wadkins of Gosnell, who is a member of the American Legion Auxiliary. The Bateys will have been married 51 years in October. Their children include Laura Jones, 50, of North Little Rock; Renee Butler, 47, of Beebe, who has two children, Christiana, 26, and Tessa, 18; and John Batey, 32, Marie Batey, 30, and Michael Batey, 28, all of Beebe.

Batey said he “retired” from the state adjutant’s job to travel with his wife.

“She had her bucket list,” he said, laughing. “We went to Mount Rushmore. We visited with family. We’ve done other things, too.”

Batey said he was approached by several past department commanders, post commanders and post members to run for the office of state commander.

“You have to campaign for this job,” he said, laughing, as he gave visitors campaign buttons he used in the race. “It was a close race, but I came out the winner.

“I hope to help increase our membership during the coming year. We are actively seeking younger members, those who have served in the more recent wars. We are seeing some now who have served in Iraq and Afghanistan. We hope to even start some new posts in the state.”

Batey and his wife will leave soon for the American Legion National Convention, set for Aug. 23-29 in Indianapolis, Indiana.

“That convention is always a lot of fun,” Batey said. “I am proud to be able to represent Arkansas at that event.”