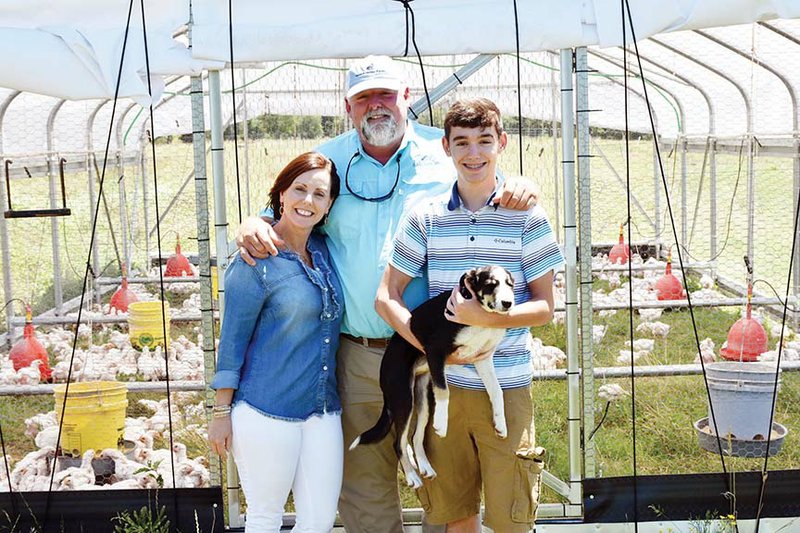 The Alan Mahan family of the Rabbit Ridge community is the 2019 Van Buren County Farm Family of the Year, as well as the 2019 North Central District Farm Family of the Year. They raise poultry, as well as cattle, hogs and sheep. Shown here in front of one of the chicken schooners are Angela and Alan Mahan and their son, Crafton Blankenship, holding their dog, Tess. Not shown are their other children — Zack Mahan, Maggie Mahan and Jacob Blankenship. ( Staci Vandagriff)

RABBIT RIDGE — Alan and Angela Mahan raise cattle, hogs, chickens and sheep on Rabbit Ridge Farms, but they do it their own way. They practice sustainable agriculture and participate in a farm-to-table operation as they promote agritourism.

“Being recognized as a leader in your field is always rewarding,” Alan said, referring to the county and district honors his family has received. “Being Farm Family [of the Year] was even more special for us because we are doing things that are not considered the norm in the farming world. We grow grass, and our living is based on the most efficient means of harvesting that grass, then marketing all of those grass-eaters while bringing visitors to the farm.”

The Mahans will now be judged with the other seven district winners to determine a state winner, who will be announced Dec. 6 at the Farm Family of the Year Luncheon at the Wyndham Hotel in North Little Rock.

“It is an honor for Van Buren County to have Rabbit Ridge Farms as our 2019 county and district Farm Family of the Year,” said Danny Griffin, Van Buren County Cooperative Extension Service agent and staff chairman. “Angela and Alan do an excellent job in promoting a love for agriculture in our county, region and state. They have a passion for sharing their methods and ideology with all people who use their products or who also have a desire to go into agriculture production.”

Griffin said Van Buren County has had the honor to have three district farm families in the past seven years.

“We were honored in 2013, 2018 and now 2019 with our county farm families receiving the District Farm Family recognition,” he said.

Alan, 51, grew up on a dairy farm in the community of Rabbit Ridge, a son of the late Alon and Maxine Mahan.

“We were a small Grade A dairy that supported our family,” Alan said. “The dairy was not enough to provide everything that a family needed. We supplemented our living with truck patches, especially watermelons. A field of up to 10 to 15 acres of melons is what gave our family a little extra.

“We are fourth-generation farmers with three generations on the same farm,” Alan said.” We are very proud of that.

“My dad was born in 1919 — I was obviously a late-in-life baby,” Alan said, smiling. “Because my father was a child of the Depression and born to a man who was born in 1888 — that’s right, my grandfather was born in 1888 — we did things growing up that weren’t ‘normal’ in our day. We raised our own hogs, had hog killings and preserved the proteins to be spread throughout the year. My mother knew every blackberry bush, wild plum and fruit tree around Rabbit Ridge and processed all of those into jams and jellies.

“My mother was the force behind the operation,” he said. “She rose early and milked the cows, milked in the afternoon and went to bed late after she cared for the home.

“I have seven siblings who live from Texas to Plumerville to Rabbit Ridge.”

Alan graduated from South Side Bee Branch High School in 1986. He attended Petit Jean Vo-Tech (now the University of Arkansas Community College at Morrilton) and then the University of Central Arkansas in Conway. He joined the Arkansas

Army Reserve in 1989 as a combat engineer attached to the 489th Combat Engineer Battalion and served for 11 years.

He established Mahan Construction Co. and operated that as his primary income provider for 27 years.

Angela, 47, grew up in Mississippi County, a daughter of Bob and Becky Ramey. Angela’s father was a row-crop farmer. She has one brother, Drew Ramey, who lives in Maumelle.

The Mahans married in 2013; she was a widow, and he was divorced.

“We had been friends for years,” Alan said. “Once we married and moved here, she became my partner in my construction business and now is full time on the farm. She oversees all of the venue operations, office management and creative content. Rabbit Ridge Farms could not operate without her.”

The Mahans’ children help on the farm when they can.

Zack was an instrumental part of the cattle operation when he was younger. He now works as a salesman for Spectrum Paint. He and his wife, Jordan, who is a photographer and photographs events at Rabbit Ridge Farms, live in Bryant.

Maggie helps with the animals and serves at events on the farm. She is a junior at Arkansas State University, majoring in environmental biology, and is a member of the women’s basketball team.

Jacob has helped on the farm as well. He is a member of the Air National Guard and just completed training as a C-130 crew chief. He has an associate degree in welding from UACCM and plans to attend ASU to major in agriculture.

Crafton is the only child still living at home and helps on the farm and in the farm store. He will attend the Arkansas School for Mathematics, Sciences and the Arts in Hot Springs this fall to further his studies in computer science.

“We are farming as holistically as possible,” Alan said. “We use animal and pasture rotation to increase fertility and organic manner on our pastures. We are increasing the amount of grasses and crops grown to feed our animals, rather than rely on feed and hay. We have dramatically reduced the amount of herbicides and pesticides used due to intensive grazing practices and animals.

“We self-market all of our products directly from the farm through distribution, wholesale, retail and e-commerce,”

Alan said. “We depend largely on social media and agritourism for marketing Rabbit Ridge Farms.

“We realized that in order to be successful on our farm, we needed to have multiple income streams,” he said.

These income streams include selling the proteins (meat from the animals they raise) through distribution, wholesale to several restaurants and markets; retail directly to consumers; and e-commerce, in which they have shipped products to places from Oregon to Florida; renting their row-crop land in Mississippi County; and the promotion of Rabbit Ridge Farms through agritourism.

Alan said that to promote the farm, the family hosts weekly farm lunches that are open to the public, occasional farm breakfasts that are also open to the public and evening events, as well as offering overnight stays in the Venue at Rabbit Ridge, which is available to rent for numerous occasions. They also operate a “farm store” at the Venue, where customers may purchase “proteins” — grass-fed beef and pastured pork and chicken — raised on Rabbit Ridge Farms.

“For many years, farming was secondary to my primary income as a general contractor,” Alan said.

“Mahan Construction operated for 27 years. I was able to build structures that would outlast me and be a part of projects that are special to me. To name just a few, … I got to rebuild my parents’ home after a devastating fire; I built my home that I live in and was able to incorporate many things that are special to me; [I built] a houseboat, Bass Pro Shops in Little Rock, homes for young couples and many more.

“I am most proud of our company’s work on Crystal Bridges [Museum of American Art in Bentonville] where we were the primary wood contractor,” Alan said. “When you visit and look at the wooden structures there, along with the curved roofs, … we did that.

“Today, I am fully retired from construction for the public, but I stay busy building on the farm. My goal is to leave a lasting legacy in the field of agriculture that will outlive me — new and innovative ways to grow livestock and creating a model of agriculture that will allow a young farmer to farm successfully without crippling debt. Part of that curriculum will teach our young people where their food comes from and the benefits of clean protein.”