Rotary’s new president focuses on Arkadelphia club rather than self 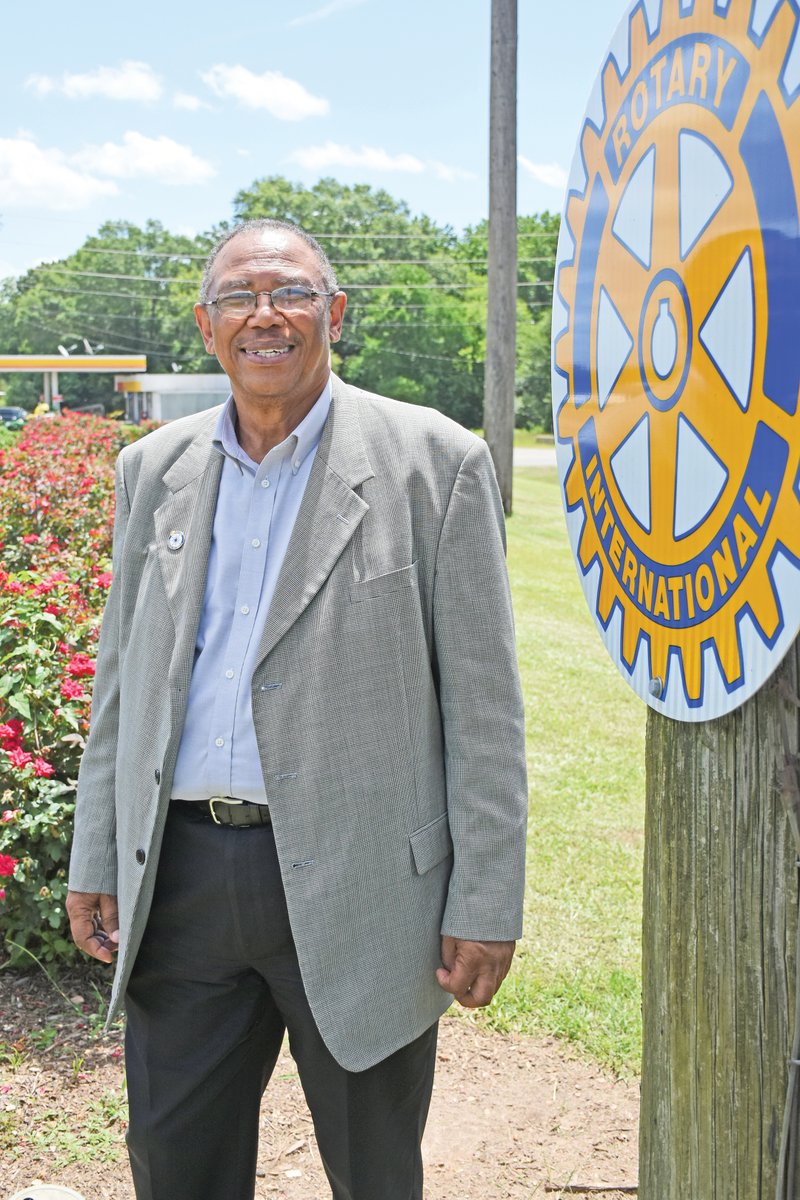 Euodias Goza became the new president of the Rotary Club of Arkadelphia on July 1. He joined Rotary in 1997 and is the local club’s first African-American president. Founded in 1919, the club is celebrating its 100th anniversary this year. Goza stands near the flower bed that he Rotary Club of Arkadelphia sponsored as a beautification project at Interstate 30’s exit 73, leading into the city’s business district. The club serves the community in a variety of ways, including supporting the local Angel Tree Project, the Dolly Parton Imagination Library, community food drives and scholarships. ( Staci Vandagriff)

Euodias Goza believes in the Rotary International motto: Service Before Self.

Although he worked in the banking industry for 40 years, it’s the volunteer work he does now that seems to satisfy him.

“When you help others, you get a warm feeling,” said Goza, who is the new president of the Rotary Club of Arkadelphia, often called the “noon club” because it meets every Friday during the noon hour. “We do a lot in the community, but we want to do more. It’s my turn to get our club excited.”

Goza, who tells visitors his first name is pronounced “U-dus,” became president of the local civic club on July 1 when then-president David Sesser passed the gavel to Goza during the club’s weekly meeting at Slim and Shorty’s in downtown Arkadelphia. He readily admits that he is the first African-American to wield the gavel for this club, but he wants to focus on the club and the projects it sponsors to help the community.

“I’ve worked my way up in the club, serving first as assistant secretary,” he said. “I had the opportunity to become president several years ago, but personal things came up, and I had to take a step back. But I was able to get back on track, and now I am proud to become the president as we celebrate our 100th year.

“I had no idea that there had never been a black president before now,” Goza said, again noting that while that is an achievement, it is not his focus as president.

“It’s good to look back at the past presidents and see the projects they brought to the club,” he said. “This year, we hope to see our membership grow. We want to sponsor programs that help with community needs.”

Shelley Loe, executive vice president of the Arkadelphia Alliance and Area Chamber of Commerce and 2010-2011 Rotary Club of Arkadelphia president, said, “Euodias personifies the Rotary mission of service above self. I worked with Euodias at Southern Bancorp; then in my previous role as president of our Rotary Club, I grew to respect him even more. Euodias’ passion for the growth of people through education and by lending a helping hand makes him a real treasure to Arkadelphia and Clark County.”

Lori Ross, 2011-2012 Rotary Club of Arkadelphia president and now city president of Citizens Bank Arkadelphia, said, “Euodias has given countless hours of his time and resources serving our community over the years.

“His actions represent the 4-Way Rotary Test: ‘Is it the truth? Is it fair to all concerned? Will it build goodwill and better friendships? Will it be beneficial to all concerned?’” she said. “Euodias is energetic and motivates others without even realizing it. His smile and positive attitude are almost infectious. I am proud to call him a friend and our new Rotary Club president.”

Goza joined Rotary when he went to work for Southern Bancorp in Arkadelphia.

“Bill Fowler introduced me to Rotary. We used to meet at Bowen’s in Caddo Valley; then we met for a while at Western Sizzlin.’ Our membership began to slip, so we moved our meeting place downtown to Shorty and Slim’s. We’re trying to get our membership back up,” Goza said.

“I joined Rotary in 1997, and in 1999 or 2000, I was asked to help form the Sunrise Club, which was the second Rotary Club to form in Arkadelphia,” he said, adding that he did help with that club’s formation and attended the morning meetings for a while, but he eventually went back to the noon club.

“After that, I became active in the [noon] club,” he said. “That gave me the opportunity to meet so many people … city leaders, professional people. It is nice to be able to come to the same club with those people.

“I am really excited about the coming year. I’m looking forward to our 100th-anniversary banquet on Nov. 7 at Henderson State University, which will be an invitation-only event. We are trying to work on a program that tells our history.”

The Rotary Club of Arkadelphia received its charter on Nov. 1, 1919. Its membership grew so large that in 1999, a second chapter, Arkadelphia-Sunrise, was formed. Over the years, the club has supported numerous programs in the community. A complete history of the club can be found on its website, arkadelphiarotary.weebly.com.

Goza was born in Gurdon in 1948, but when he was in first grade, he moved with his family to Detroit, Michigan. A son of Willie Jean Goza of Detroit and the late Marvin Goza, Euodias Goza graduated from high school in Detroit in 1966 and came back to Arkansas in 1967 to attend Ouachita Baptist University.

“I had to work in college, but I had to take enough classes to avoid the draft during the Vietnam War,” he said. “I had to join ROTC at Ouachita. I stayed in [ROTC] the two years that were required, then applied to get into the lottery, hoping for a higher number so as not to be drafted. I got married during my junior year and finished at OBU in 1971 with a degree in business and economics.”

Goza later received a master’s degree in banking in 2007 through online courses from Mercy College in New York.

After graduating from Ouachita, he began his banking career at Twin City Bank in North Little Rock. His banking career spanned more than 40 years, including time at Mercantile Bank, which was sold, and finally at Southern Bancorp in Arkadelphia, retiring in 2012 as senior vice president and director of internal audit at Southern Bancorp. He then went to work at Capstone Pioneer Settlement Services, a real estate title insurance company owned by Eric Hughes and his wife, Erica Hughes.

“I worked with Eric for about three or four years, but I am now officially retired,” Goza said, smiling. He was chief operating officer at Capstone Pioneer.

Goza also attended the Arkansas School of Banking and graduated from the University of Wisconsin’s Bank Administration Institute of Bank Auditing. He also holds a certification in bank compliance.

In addition to volunteering with the Rotary Club of Arkadelphia, Goza volunteers in several other local organizations.

“I guess you could say volunteering is my hobby,” he said. “I am on the boards of the W.P. Sturgis Foundation, the Community Enrichment Center and the Arkadelphia Water Department. I’m also active in my church — the Carrie Street Church of God in Gurdon — and serve as a deacon.

“I volunteer with Arms Around Arkadelphia, a mission project started by David McAlester at First Baptist Church,” Goza said. “We do repair work at the homes of area residents who cannot do the work themselves.”

Goza is a former member of the Clark County Economic Development Commission, which he served as chairman, and a former president of the Ouachita Baptist University Alumni Advisory Board.

Goza said he was one of six children in his family — two boys and four girls.

“They all stayed in Michigan. … All of my relatives have passed now,” he said. “I came to live in Arkansas. This is where I want to be. This Rotary Club is my club. These are my friends and associates. We do our best for our community. We want to see our community grow and prosper. We think great things are happening here.”

Goza said membership in the Rotary Club of Arkadelphia is open to anyone.

“We meet every Friday at noon at Slim and Shorty’s,” he said. “Anyone can come to a meeting and see what it’s all about. We have about 50 active members. … We need to grow. We need to encourage people — especially young people — to do for others.”