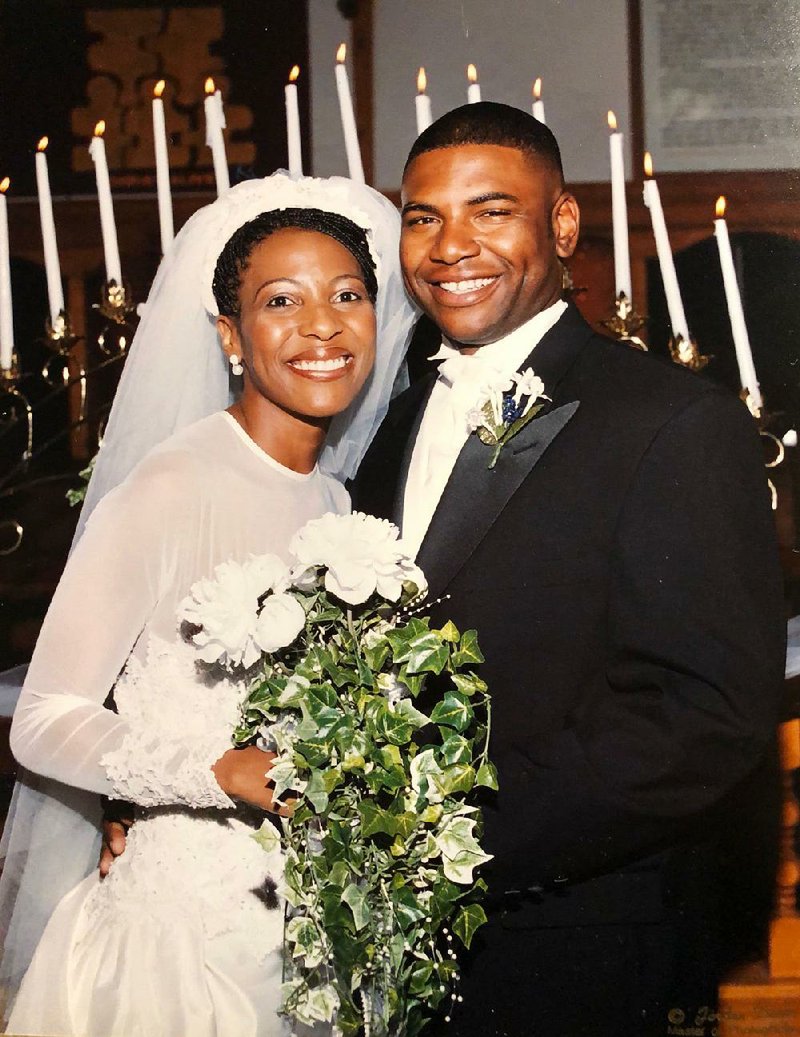 Greg Smith and Kristi Wallace were married on Sept. 18, 1999. Kristi’s mother had died in April 1999, and Greg’s father died that May. Family and friends packed the church to support them as they exchanged their vows. “They were both there with us in spirit, of course, but it was an emotional day,” Kristi says. “It really was a family affair.

Greg Smith's friends knew Kristi Wallace and Kristi's friends new Greg. Greg and Kristi didn't know each other until their friends decided it was time they meet.

She says: “I thought, ‘This guy is really cute. I hope he’s as cute on the inside as he is on the outside.’”

She says: “I just remember feeling really giddy. Because [all] our parents weren’t able to be there I was worried I would be emotional, but I was actually really giddy and really happy. And I just will always remember that feeling.”

She says: “I had to learn that Greg couldn’t read my mind. Understand what you need and make your feelings known. Learn how to convey it to your spouse because until you do that they won’t know how you’re feeling and they won’t be able to help you.”

"We basically lived around the corner from each other for years and didn't know it," Greg says.

Greg's friend was dating a girl who went to Oak Grove High School, though, and that girl's sister was a close friend of Kristi's. The girls' mother knew that Kristi was looking for a date to her junior prom and she mentioned that Greg would be a good prospect.

"I didn't really have any prospects at school," Kristi says.

Their friends arranged for them to meet at an Oak Grove basketball game.

Kristi was in the bleachers when Greg walked in and she heard people around her saying he was there. He had arrived wearing his blue and white baseball letterman jacket and baseball cap from J.A. Fair, so even if most of the people there hadn't known who he was he would have stood out among the green-and-white sporting spectators.

"I would never have gone to an Oak Grove basketball game on my own," he says. "It was my senior year, I was at J.A. Fair and I was all wrapped up in baseball."

Kristi needed her eyeglasses to see clearly, but she was self-conscious about wearing them in front of her new date so helpful friends directed him to her.

"I looked cute, but I was trying to make a great impression," she says. "I couldn't see, really, the action so I was taking my glasses on and off. The conversation was good. I just kind of felt a little awkward. I should have just kept my glasses on and just been myself."

Their first date was to be to a movie and dinner. Greg didn't ask Kristi for her address, but their families knew each other so when it came time for him to pick her up, he asked his mother where she lived.

The house he went to based on his mother's directions, however, actually belonged to Kristi's older brother -- also named Greg -- who hadn't heard she was going on a date. Before her Greg could make it a few doors from the wrong address to the right one, her brother had already called to interrogate her.

"I didn't want my brother to know quite yet," Kristi says. "I'm the baby sister, and I just wanted to feel him out first."

Her mother put the kibosh on their plans to go to a movie theater -- she was the youngest in the family and everyone was a bit protective of her -- but they were allowed to go to dinner and come back to her house to watch a movie.

"Being a broke 18-year-old and going to Red Lobster, I felt like I was doing something," Greg says. "But she couldn't eat."

She was nervous, she explains.

"This was my first real date," she says. "A lot of my friends had already been out on dates. I really hadn't."

Kristi and Greg went to her junior prom and his senior prom that first year, and the next year he took her to her senior prom.

Both enrolled at the University of Arkansas at Little Rock after high school, and he was her escort for debutante activities and then sorority ones.

"I think the experience that really solidified our relationship was when I went to France, the summer of my sophomore year," Kristi says. "I went in the summer for six weeks to Strasbourg, France."

They wrote letters while she was gone, eagerly awaiting responses to arrive in their mailboxes.

"Absence makes the heart grow fonder, so I think we realized that we knew we had something special when I left and came back," she says.

Around Christmas 1998, Greg asked Kristi how much she loved him. They were in his townhouse in downtown Little Rock at the time, and she answered that she loved him a lot.

"Then he said, 'Well, do you love me this much?' And then he had this box. And then he opened up the box and that was the ring. And he said, 'Will you marry me?'" she says.

They were wed on Sept. 18, 1999, at Palarm Chapel Missionary Baptist Church in Mayflower, with so many friends and family members present that there was standing room only.

Kristi and Greg live in Little Rock, where she is senior director of development at UALR and he is a corporal with the Arkansas State Capitol Police.

They write notes to each other often, penning short missives to stay connected.

"About a month ago when I left the house he had taped, 'I love you,' to my car," she says. "It doesn't have to happen every day. It's just, you know, those nice spontaneous notes." 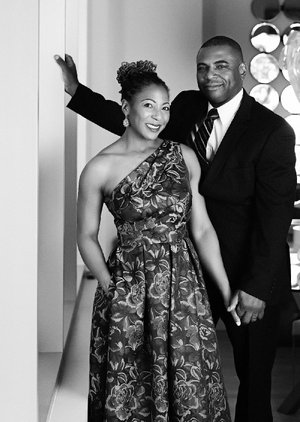 Photo by Special to the Democrat-Gazette/Whitney Bower Imaging
Kristi Wallace and Greg Smith met in high school and will celebrate their 20th anniversary next month. “We grew up together from 1990 to 1999,” Greg says. “We basically grew to each other. It wasn’t ‘if this is going to be my future spouse,’ it was like, ‘this is going to be my wife.'"

Print Headline: They spent the '90s growing up, married in '99