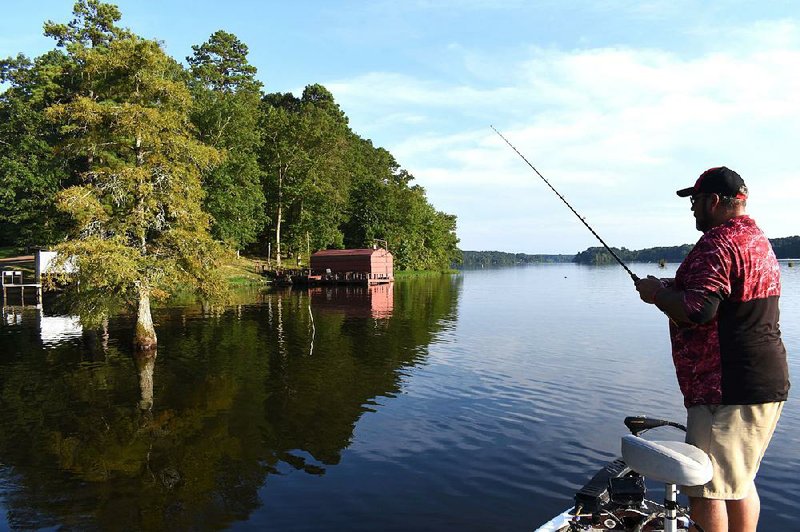 Mark Shatley works a plastic worm around the base of a cypress tree.

Just when I was ready to give up on Lower White Oak Lake, Mark Shatley shined a light.

In 2018 and 2019, I made unsuccessful forays to Lower White Oak Lake, a renowned big bass hotspot in Nevada and Ouachita counties near Bluff City.

Lower White Oak, the big bass factory, covers 1,645 acres. Upper White Oak covers 1,032 acres. Both sections are loaded with visible cover, and every inch looks as if it could yield an 8-pounder on every cast. Of course, it is never that easy. I caught a few small bass, but respectable size fish eluded me.

I wrote about those trips, and Shatley was conflicted. His nativist side appreciated the bad reviews because he believed they would discourage excessive fishing pressure. Secrets are best kept, after all.

On the other hand, Shatley also felt compelled to defend his beloved lake’s honor. He sent photos of bass weighing up to 10 pounds that he, his wife Melissa and their children caught over the summer. He explained how they did it. He also took a chance and invited me to fish with him on Aug. 1.

I would have crawled to Lexington, err, to Bluff City, to accept that offer.

Shatley, of Camden, is a retired firefighter and avid bass angler who fishes all over south Arkansas. He is a capable “stick” on the Ouachita River, but Lower White Oak Lake is his favorite. He’s fished it since he was a teenager, and he has seen all of its ups and downs.

Right now, Shatley said, White Oak is enjoying a very strong cycle thanks largely to a progressive scale of slot length limits since 2014 that have protected the oldest year class of bass from the taxidermist and frying pan. Currently, anglers may not keep bass between 18-21 inches long. They may keep only one bass larger than 21 inches, and any smaller than 18 inches up to a 10-fish daily limit.

Before fishing, Shatley gave me a welcome surprise. It was two bags of homemade, soft plastic jerkbaits that are identical to an old but defunct favorite, the Culprit Jerk Worm.

“I loved that bait, but they quit making it,” Shatley said. “You can’t find them anywhere, so I started making my own. Try them and see what you think.”

The colors were pink and pumpkin/red flake, two of my favorites. Shatley said he experimented extensively to formulate a plastic that had the magic combination of durability and suppleness. He said he is pleased with the result.

To catch big bass on a lake loaded with timber, stumps and brush, you think Shatley would use pool cue rods and heavy line with jigs and Texas-rigged worms.

And you would be wrong.

Shatley does the opposite. He uses 3/16- to 1/4-ounce ball head jigs, known as the “shaky head,” and Z Man Trick worms. He presents them with 7-foot, medium-action, fast tip rods.

“People might think that’s crazy using such a light rod, but you’ve got to have the sensitivity to use the shaky head,” Shatley said. “If you use a a medium-heavy or stiffer rod, it takes all the action out of the bait.”

The technique is similar to using shaky heads on clear highland reservoirs like Beaver Lake, where they are a tournament staple.

“You’re hopping the worm on the bottom with a steady up-down retrieve,” Shatley said. “The worms actually float a little. With this thing standing up on bottom and hopping along, the bass can’t hardly stand it.”

Of course, you have to cast the jig into cover where bass hide in the still, hot, sunny weather that prevailed in the late afternoon and evening of Aug. 1. To reduce hangups, Shatley conceals the hook point inside the worm, but snags are inevitable, especially if you cast into cover from the wrong angle.

Shatley knows how most of the lakes brushpiles are configured. If you cast to the trunk ends of the brush, your retrieve will go with the outward flow of the branches, and your jig will go through it.

If you retrieve with the inward flow, toward the trunk ends, your jig will snag in the forks. The effort it takes to free the lure will drive fish out of the pile, requiring you to relocate.

Also, you might think you need to fish all the irresistible cover next to the banks.

Again, you would be wrong.

The water next to the banks is only a few inches deep. Shatley said he seldom catches bass there. Curiously, the bass generally concentrate in cover that is in open water. It isn’t necessarily deep water, either. Shatley’s first stop was a high spot that was considerably shallower than the surrounding water. His first cast produced a 19-inch largemouth.

There are a lot of other high spots, some of which Shatley called “sand boils,” that hold fish in the summer when the water temperature is 87.6 degrees, like it was when we fished.

“When it gets real hot like this, I think the lake probably starts to set up a thermocline,” Shatley said. “The fish want to get above that, and there’s a lot of cover on the humps and sand boils.”

While the trip wasn’t a slugfest, it was solid. Shatley caught about 10 largemouths. Half a dozen were in the 18- to 20-inch range. One was 17 inches, and the others were small. I caught four small bass.

The fact that Shatley apologized for the slow action told me that he expects better, and that convinced me to accept a second invitation. 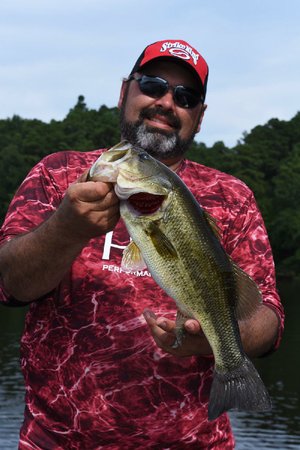 Photo by Arkansas Democrat-Gazette/BRYAN HENDRICKS
Mark Shatley caught more than half a dozen bass like this one Aug. 1 at Lower White Oak Lake near Bluff City. For more photos, visit arkansasonline.com/811fishing/.
ADVERTISEMENT