HARRISON -- Wikipedia has become a battleground for Harrison's reputation.

Mayor Jerry Jackson wants Harrison to be known as the "Best Small Town in America."

But others want Harrison to be known as the national headquarters of the Knights of the Ku Klux Klan.

For months, the city has been trying to remove Klan references from the "Harrison, Arkansas" article on Wikipedia.org, which is the largest and most popular general reference site on the World Wide Web, according to Wikipedia itself.

Wikipedia gets 18 billion page views and about 500 million unique visitors a month.

The Wikipedia page for Harrison is the first hit when "Harrison, Arkansas" is searched on Google.com.

Wikipedia articles are written and edited by the public, and facts are sometimes in dispute. Its editorial policy is determined by more than 200,000 volunteers who edit Wikipedia every month, said Adora Svitak, a spokesman for the Wikimedia Foundation.

Since the entry for "Harrison, Arkansas" first appeared on Wikipedia in 2002, the article has been edited more than two dozen times specifically regarding the terms "klan," "KKK" and "race riots," dating back to 2007. In most cases, one editor removed the reference, then another added it back in.

Harrison's Wikipedia entry currently contains these two sentences: "Race riots by whites in 1905 and 1909 drove away black residents, establishing Harrison as a sundown town. Today (2019) it is known as a center of white supremacist activity, including the national headquarters of the Knights of the Ku Klux Klan."

Layne Ragsdale, public information officer for the Harrison Community Task Force on Race Relations, said the city has been trying to remove those sentences, but every time, they pop back up in the article.

"It was almost so fast it looked like it was a bot changing it back," she said, referring to a computer program that performs tasks automatically. "We thought we could just go in and change it. But a few minutes after we changed it, they'd change it back."

Svitak said there are restrictions on the Harrison article because of disputed content.

"Most articles are open for anyone with internet access to edit, except in limited cases where editing is restricted to prevent disruption or vandalism," she said in an email. "There is some additional editor oversight on the article on Harrison, Arkansas; specifically, if someone attempts to edit the page as a new or unregistered user, that change will be subject to review prior to publication, and due to the disputes about content, users are asked to not remove cited content without discussion leading to consensus."

The restrictions were implemented June 28, according to the article's editing history.

Harrison's race relations task force was formed in 2003 to promote diversity and respond to racial-bias accusations against the city.

When a billboard went up in Harrison in 2013 that read "Anti-Racist is a Code Word for Anti-White," the task force responded with a "Love Your Neighbor" billboard campaign.

The task force has served as a sort of quick-response crisis-communications team, but it has been unable to remove the disputed Wikipedia sentences.

The Harrison race riots of 1905 and 1909 are well-documented. But Harrison Mayor Jerry Jackson said it's not something the city wants to advertise.

"Those race riots were all over the country, so I don't know why we would want to highlight Harrison in that manner," he said. "It's not exclusive to Harrison, and it was 100 years ago."

Then there's the sentence about the Klan headquarters being in Harrison, which Jackson said is demonstrably false.

That sentence on Harrison's Wikipedia page cites a 2014 article on Vice.com and the Southern Poverty Law Center's website splcenter.org, which says Thom Robb, national director of the Knights of the Ku Klux Klan, has a "home in Harrison" and the organization is based there.

Robb said he lives a mile from Zinc, which is 15 miles east of Harrison, but the Klan has used a Harrison Post Office box for its mailing address.

When asked if there was any effort on social media to promote Harrison as a center for white supremacist activity, Robb responded in an email, "I suppose we promote that to some degree, but I am sure our influence in minimal."

In a follow-up email, Robb said he was referring to the Klan's billboard campaign.

"I don't know who alters the Wikipedia page," he said. "I haven't been to it in months."

In a May 23 entry on the Wikipedia page's editing history, Wphilli1977 wrote that he "Removed negative propaganda used by white supremacist groups that aren't located in the city of Harrison. The propaganda is used by these groups to present a false image of the city of Harrison in an attempt to discourage diversity [and] tolerance of all people."

The next day, someone going by the name Jacona changed it back to the previous wording.

"Your edit to Harrison included removing information about the town's history as a sundown town, including reliable sources," wrote Jacona. "This article and others like it have a long history of vandalism and censorship by people trying to whitewash what they consider negative information from history. This is censorship pure and simple, and Wikipedia is not censored."

In January 2010, an anonymous person cut and pasted the Encyclopedia of Arkansas' entry on the "Harrison race riots" into Harrison's Wikipedia article. Four months later, someone going by the name Happycamper700 said that section should be removed because "The article was misleading, slanderous, hateful, limited to half truths at best, about a nice little town."

The section was removed a few hours later because it violated the Central Arkansas Library System's copyright for the Encyclopedia of Arkansas.

Lancaster said he grew up in Jonesboro and now lives in Little Rock, both cities that had "terrible, spectacular lynchings."

"If we want our communities to be places where everyone feels they belong, where everyone feels safe to participate in the culture and economy, then we need to tell these stories to start to undo that legacy of terror," he said. "Otherwise, you end up spending more and more energy trying to keep this history down and more and more energy propping up your own false narratives of the past."

But Lancaster said he understands why the people of Harrison feel picked upon.

"They have become kind of the shorthand not just for sundown towns but for small-town racism as a whole," he said.

Lancaster said there were race riots in cities across America, including other Arkansas towns like Paragould, Cotter and Catcher. Of those three Arkansas towns, only Paragould and Cotter have Wikipedia pages, and neither of those pages mentions racial tensions.

David Wilson, Harrison's information technology director, tried on May 17 to change Wikipedia's article on "Boone County, Arkansas," which includes these sentences: "In 1905 and 1909, race riots were conducted to drive African-Americans out of the area. It was marketed as an all-white sundown town into the 1920s. Today, it is known as a center of white supremacist activity, including the national headquarters of the Knights of the Ku Klux Klan in Zinc."

Editing under the name powerofpositive, Wilson tried to remove those sentences and another reference to the Klan on the Boone County Wikipedia page.

"We are a county of small communities that are welcoming of all people, regardless of race, gender, religion or nationality," he wrote in a section regarding the Wikipedia page changes. "The KKK is not regarded here and we want to encourage people to move here and visit. We know how popular Wikipedia is but this stains the community with negative exposure and we want to keep it positive."

Four hours later, Jacona added the sentences back in that Wilson had cut from the Boone County Wikipedia entry, citing two magazine articles, a Public Broadcasting Service documentary and KUAF, the National Public Radio station based in Fayetteville.

Ragsdale said Harrison may not be able to remove the Klan references, but the city can add more to the Wikipedia entry about good things going on in the city.

Don Heider, executive director of the Markkula Center for Applied Ethics at Santa Clara University in California, said Wikipedia admits that it's not a reliable source of information.

"Instead of an encyclopedia, which writes with some authority and checks accuracy, Wikipedia depends entirely upon volunteers to make entries and corrections," he said. "I think the folks in Harrison might be better served by first getting the information corrected on the Southern Poverty Law Center's website or by Vice. Or they need to find other sources they can use to convince the editors."

The Southern Poverty Law Center says the Klan isn't what it once was.

"Since the 1970s, the Klan has been greatly weakened by internal conflicts, court cases, a seemingly endless series of splits and government infiltration," according to splcenter.org. "While some factions have preserved an openly racist and militant approach, others have tried to enter the mainstream, cloaking their racism as mere 'civil rights for whites.' Today, the Center estimates that there are between 5,000 and 8,000 Klan members, split among dozens of different -- and often warring -- organizations that use the Klan name."

Jackson said Harrison's image online has been "untruthful and damaging" for years.

"I believe Harrison is probably the most non-racist small town in America because we have had this image to deal with for so long," he said. 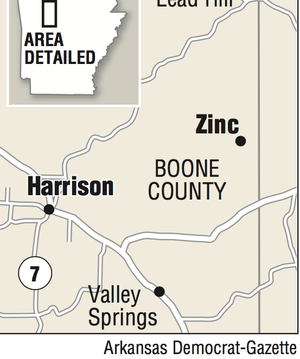