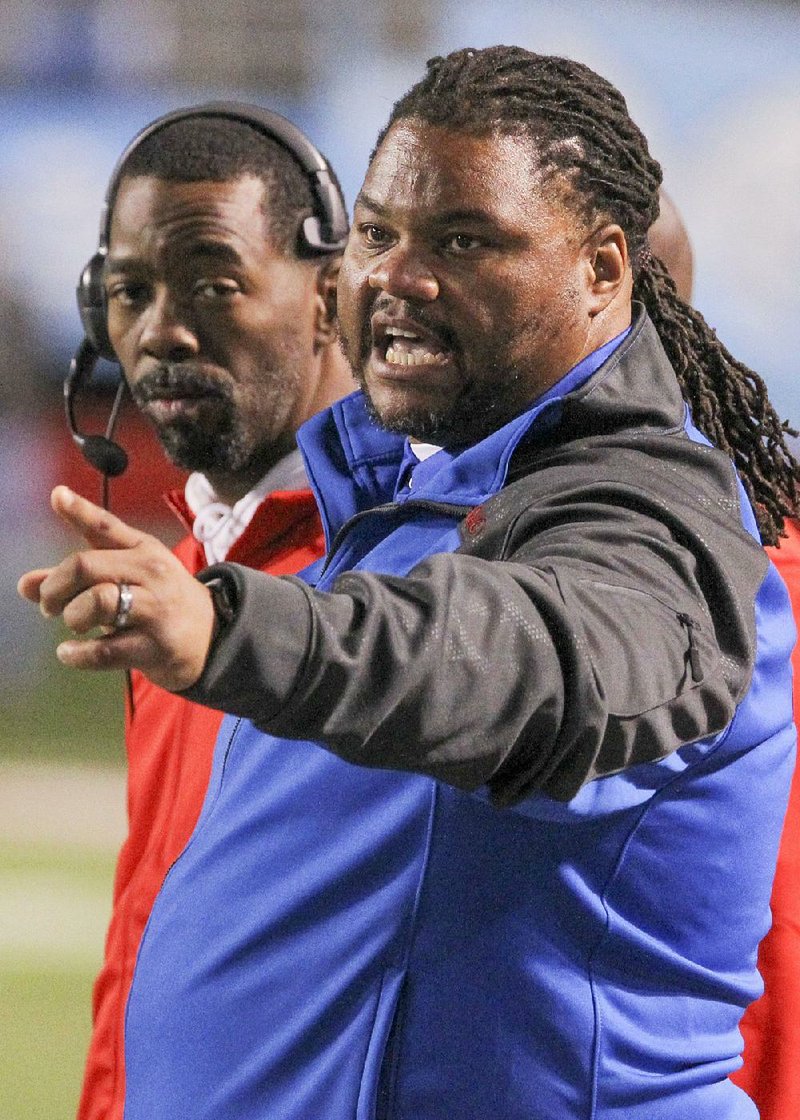 Little Rock McClellan Coach Maurice Moody (right) said he hopes to mold the Lions into state-title contenders again this season, the final one for the school.

The primary goal for McClellan has been the same ever since Moody took over the program seven years ago.

"We're all about winning state championships, and if you're not, you're in the wrong business," Moody said. "We've gotten close a few times but haven't been able to knock the door down and finish. But that doesn't mean the end game changes.

"We want to play in that last game in December and win a state title."

Such is life nowadays for McClellan, which has become a perennial state-title contender after spending years as homecoming fodder for opposing teams prior to Moody's arrival.

The Lions have won at least 10 games in three of the past four seasons, something only Pulaski Academy has accomplished in Class 5A. The Bruins captured three state titles during that span, two of which came at the expense of McClellan.

In Moody's eyes, it's now or never for the Lions if they're going to break through and win their first crown since 1971.

Southwest Little Rock High School will open next season to McClellan and Little Rock Fair students, effectively ending both schools' existence. Moody said McClellan's closure has given his team added incentive to have a monster year.

"It's tough to see the school close, to see what we've built here come to an end," he said. "At the same time, though, I'm excited. We're putting added pressure on ourselves because we're dedicating this entire year to every McClellan alum and to everyone that's ever suited up in that McClellan football gear.

"We're putting that pressure on to finish in a big way. That may not necessarily mean a state championship, but of course, that's what we shoot for every year. Still, we want to finish this thing off the right way and give everyone a memory that's going to last forever."

Those lasting impressions may revolve around the Lions' veteran offensive line, which has all five starters returning from a team that went 10-2 and advanced to the second round of the playoffs a year ago.

Lions at a glance

"That's where we're hanging our hats on," Moody said. "They possess that leadership that you need because they've gelled together now for two years. They're big, they're strong -- four or five are benching over 300 pounds -- they're dominant.

Moody thinks he has the skill players to run behind his guys up front.

"We're pretty much gonna play running back by committee," he said. "We've got a ton of guys who are going to touch the ball, a ton of that. That starts with Jeremiah Aikins, who played a whole lot for us last year."

"Williams, especially, has just been amazing for us," Moody explained. "He's been that way for his entire career at McClellan. He's a special kid that we think is going to have a big year."

The Lions, who allowed 67 points in 5A-South play in 2018, will continue to have girth along the defensive line. Harris and Aikins will pace the linebackers, and Kenneth McCardell and junior Taevon Cunningham, 5-9, 160, man the safety spots. Williams and others fortify the secondary.

"We've got a lot going for us, and I'm excited about it," Moody said. "It's a process when it comes to winning consistently, and we've got that mindset now. To us, it's state championship or bust.

"We talk about it all the time, and the kids have trained their minds that way. It's conditioning, it's working hard every day. We know how it feels to get there, now we've just got to go finish. And there's no better time to do it than in the last year that McClellan will be open."