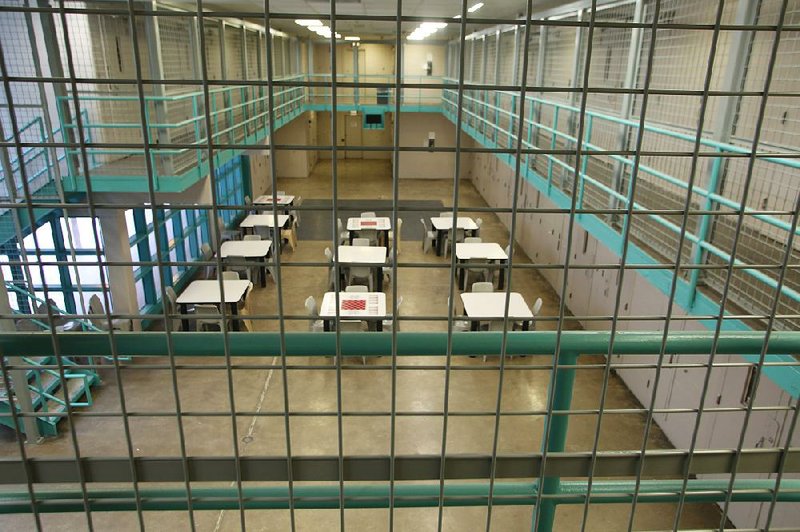 Vexed by negotiations over a jail cost-sharing plan, officials from Pulaski County cities plan to take their case before the Quorum Court this week.

The mayors of Little Rock, North Little Rock, Maumelle, Sherwood and Jacksonville have been at loggerheads with County Judge Barry Hyde over a 2018 Quorum Court ordinance updating the way the cities are billed for use of the jail.

By moving to a new fee structure when a contract expires at the end of this year, the ordinance potentially would shift millions in overall costs to cities.

Estimated increases, as outlined in a Pulaski County sheriff's office memo, are especially significant for smaller cities such as Sherwood, which would see its payment increase from $142,704 in 2019 to an estimated $473,637 -- a rise of about 230%.

"For us, I think [the ordinance] just kind of went under our radars," said Sherwood Mayor Virginia Hillman Young, noting that her administration doesn't closely watch the Quorum Court's agenda.

In recent months, records show, the cities have objected to the increases. Officials have asked for more documentation and questioned the math that went into calculating the estimated contributions.

But the effort -- spearheaded by the office of North Little Rock Mayor Joe Smith -- has bumped up against opposition from Hyde.

[NEWSLETTERS: Sign up for the Week in Little Rock and Week in North Little Rock emails at arkansasonline.com/emails]

The county judge and chief executive calls the current contract "one whale of a deal" for cities, which he argues have long underpaid for jail operations.

While he's "100% confident" in figures provided by the sheriff's office, Hyde said he thinks in general that it's time for cities to pay up.

The county has "subsidized the cities to the tune of $15 million in [the current] five-year contract," he said in an interview. "We don't have the money. We can't continue that."

Months of negotiations over the ordinance stalled recently, according to documents obtained through an Arkansas Freedom of Information Act request.

In early July, Hyde shot down an offer by the cities to increase current payments by 10% for a year while they work out a solution -- the only offer he has received to date, he said.

Now the cities' leaders have asked a Quorum Court committee to hear them out on the issue.

On Tuesday, a representative for the cities -- likely North Little Rock City Attorney Amy Fields, Smith said -- will provide a rundown of the situation to the county's agenda committee.

Smith said the presentation is intended to clarify the problem for some of the justices of the peace.

"We just don't feel good about the way this thing is heading, and we wanted to have the opportunity to present ... exactly what we feel," he said.

"We think that when they approved their ordinance last fall, they really didn't maybe understand what they were doing."

Hyde called the cities' appeal to the Quorum Court "really an insult to me."

"We don't want to have a big fight about it, but it's their expense. They have failed to meet their obligation for the last five years," he said.

Under the 2018 ordinance's rate structure, cities would be charged an approximately $178 booking, or processing, fee each time a person is taken to the jail by law enforcement officers.

The cities also would pay about $52 per day that an inmate spends in the jail.

Those figures aren't exact, documents show, and are expected to be recalibrated with 2019's facility expenses and updated five-year average of accepted inmates.

The new arrangement differs from how rates are calculated under an agreement signed by cities in 2014 that runs through this year.

Per those terms, cities pay a flat fee to the jail, with annual increases pegged to the consumer price index of no more than 3%.

Combined, cities in Pulaski County chip in roughly $3.2 million for the jail, according to figures from the county comptroller's office.

Overall, Hyde said, it costs about $27 million a year to keep the jail running, with salaries and labor its biggest expenses.

Using data from the first five months of the year, billing estimates compiled by the Pulaski County sheriff's office show that the new ordinance would raise Little Rock's payment to about $3,030,225 in 2020, from a 2019 payment of $1,983,808.

Wrightsville, Cammack Village and Alexander weren't included in the estimates.

According to North Little Rock's Smith, the cities are most concerned with what they say are inconsistencies in tallies and projections provided by the county and sheriff's office.

For example, the cities and counties disagree on whether other sources of jail revenue, such as telephone revenue and reimbursements for housing state and federal prisoners, should be figured into the calculations.

"Our CPAs and CFOs are scratching their heads, saying no, none of these numbers work," Smith said.

Hyde said the other revenue sources shouldn't figure into the estimates because the state reimburses the county for only about half the actual cost of holding one of its prisoners.

He added that other costs that the county shoulders -- such as depreciation of the jail -- were omitted, and that criticism of the methodology has been vague.

"My question [for the cities] has been: 'Are you disputing what the figures are? Did you think the sheriff wasn't capable of figuring out what the cost was?'" he said.

On that point, the cities have stressed discrepancies between cost estimates provided throughout the process, as well as their concerns about the jail's data-collection and billing abilities.

"The biggest concern is how the county is going to account for the costs -- and then, how they arrived at those costs," Maumelle Mayor Caleb Norris said.

Another point of contention for cities is the ordinance's effect on budgets.

The uncertainty around city finances has worried some of the mayors.

"Is it going to keep us from having a Police Department, a Fire Department? No," Smith said. "Will it cost us another 10 trucks, or 10 police cars and three firetrucks next year? Maybe."

Faced with the steepest increase, Young said her City Council hasn't discussed in detail where the money might come from in Sherwood.

"We're just going to have to scale back somewhere else," she said.

Jacksonville Mayor Bob Johnson said he hadn't gotten to the point of looking at specific cuts in other areas, but that "we've got some negotiation to do, because this is going to affect my budget quite a bit."

For his part, Hyde said Pulaski County has a budget of its own to manage and that he's been talking about an increase with cities for at least two years.

The county isn't in financial distress, but "what we do have is 1,200 employees who would like to be paid at a fair market rate, [and] a 30-year-old jail that right now needs a new locking system installed," he said.

"What we do have is Two Rivers Park, where we'd like to develop that as an asset to the community, where families can better enjoy it. ... We're not trying to start a new bank account."

Young said the discussion preceding the 2014 agreement also was a "struggle," though "previously there was much more negotiation, much more opportunity to discuss it."

At that time, County Judge Buddy Villines had wanted to increase the cities' payments, according to former Little Rock Mayor Mark Stodola.

He recalled that some similar issues were reflected in those discussions, which took place while Stodola was in office.

For example, he said, "the question of how [the increase] was calculated was always somewhat of a mystery."

What's new in the disagreement is a 2018 Arkansas Supreme Court decision, seen as affirming counties' rights to charge cities a daily fee for holding prisoners.

The February 2018 decision in Mississippi County v. City of Blytheville; City of Dell; City of Manila; and City of Leachville was buttressed by language in Arkansas Code Ann. 12-41-506.

After that ruling, discussions parallel to the Pulaski County conflict have taken place in a few counties around Arkansas.

Just last week, a committee voted to send an ordinance to the full Washington County Quorum Court that would create a daily-fee billing structure for cities using the county jail.

A budget deficit and crowding issues have come into play at that lockup, said Don Marr, who is chief of staff to Fayetteville Mayor Lioneld Jordan.

Marr said the administration is keeping an eye on the Quorum Court's actions, which could increase Fayetteville's payments to the jail by $600,000-$700,000.

"We're just continuing to watch that. It certainly has a budget impact to the city of Fayetteville," Marr said.

The situation in Washington County also has spurred conversation about whether certain people really need to be booked into the jail.

While there are certain situations in which you "don't have the luxury" of choosing whether to take someone to jail, Marr said, it might not be necessary for low-level offenses.

Some city leaders in central Arkansas share that perspective.

In Jacksonville, Johnson said he will meet with his Police Department to discuss processing citations without involving the jail. They've also talked about writing a grant to add fingerprint scanners to patrol cars.

The moves would save on jail costs and keep officers from spending hours at the jail processing people, he said.

Smith is meeting with district judges to make sure that bypassing the jail for low-level citations in North Little Rock would be "copacetic," and Norris added that some of that already is going on in Maumelle.

"It's a huge burden for us to even take an officer off the streets and send them down to [the jail]," he said.

The cities will make their case at the meeting scheduled for 6 p.m. Tuesday at the Pulaski County Administration Building in Little Rock.

The agenda committee, which will hear the presentation, decides whether matters should go before the full Quorum Court.

Reached for comment on the issue last week, agenda committee Chairman and Justice of the Peace Curtis Keith said he hadn't yet received materials for that meeting.

Johnson, who sat on the Quorum Court for a decade, said he sees the issue from both sides and noted that budgets are tight in every part of local government.

With Tuesday's appearance, "what we really want is a chance to negotiate. That's our main goal," the Jacksonville mayor said. "There ought to be a formula that doesn't just knock us out."

Norris said he's not unsympathetic to the county's position, and "it's my hope that we can come to an agreement that works for both sides."

According to records and correspondence, the cities' leaders originally had been scheduled to appear before the committee last month -- an appearance that was canceled as negotiations resumed.

Subsequent correspondence shows that the cities and counties have now arrived at an impasse.

A July 31 letter to the Quorum Court signed by the mayors contends that the ordinance and its accompanying fee structure present a "multitude of legal and factual issues."

Hyde, they wrote, had "rejected" the proposed interim 10% increase and "dismissed the cities' request to approach the funding of the jail as a partnership between the county and the cities."

The letter refers to correspondence sent from Hyde to Smith a few weeks earlier, which was copied to other mayors in the county and the Quorum Court.

"This is not one of those things we can partner on. ... We have determined our expense and intend to bill for that expense," Hyde wrote to Smith at that time.

"My goal is not to be lenient, but accurate." 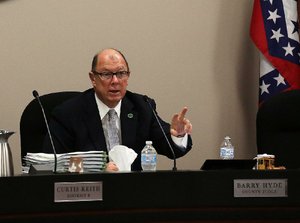 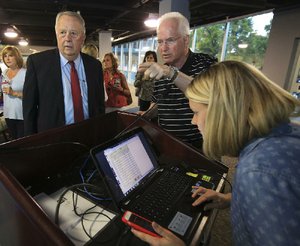 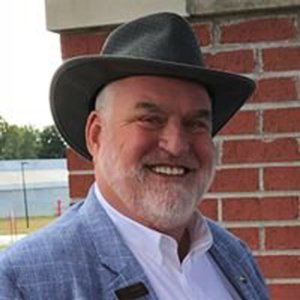 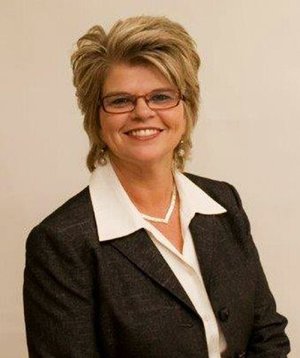 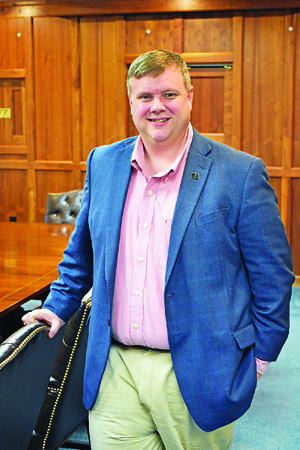 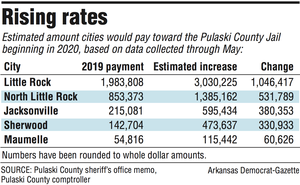