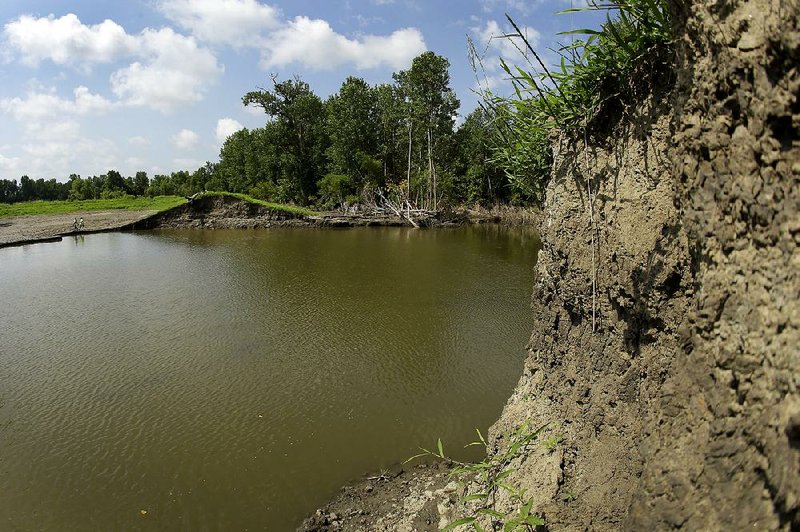 A 20-foot-deep pool of water is seen Tuesday near Saline City, Mo. The water fills an area where a levee failed as the Missouri River flooded earlier this year.

JEFFERSON CITY, Mo. -- After severe flooding this year, Iowa put $15 million into a special fund to help local governments recover and guard against future floods. Missouri allotted more money to fight rising waters, including $2 million to help buy a movable flood wall for a historic Mississippi River town that has faced flooding in all but one of the past 20 years.

In Arkansas, Gov. Asa Hutchinson announced $10 million to repair damaged levees and created a task force to study a system that in some places has fallen into disrepair after years of neglect.

The states' efforts may turn out to be down payments on what is shaping up as a long-term battle against floods, which are forecast to become more frequent and destructive as global temperatures rise.

"What is going on in the country right now is that we are having basically an awakening to the necessity and importance of waterway infrastructure," said state Sen. Jason Rapert, R-Conway, who has been pushing to improve Arkansas' levees.

The movement is motivated not only by this year's major floods, but also by flooding from intense storms such as Hurricane Harvey, which dumped 60 inches of rain on southeastern Texas in 2017. In November, Texas voters will decide whether to create a constitutionally dedicated fund for flood-control projects, jump-started with $793 million from state savings.

For years, states have relied heavily on the Federal Emergency Management Agency to pay for the bulk of recovery efforts for damaged public infrastructure. While that remains the case, more states have been debating ways to supplement federal dollars with their own money dedicated not only to rebuilding but also to avoiding future flood damage. Those efforts may include relocating homes, elevating roads and bridges, strengthening levees and creating natural wetlands that could divert floodwaters from the places where people live and work.

"There are states who are realizing that they have an obligation to step up here, that flooding is really a state and local problem, and the federal taxpayer is not going to totally bail us out. We need to be thinking ahead and helping ourselves," said Larry Larson, a former director and senior policy adviser for the Association of State Floodplain Managers.

Although President Donald Trump has expressed doubt about climate change, even calling it a hoax, a National Climate Assessment released last year by the Trump administration warned that natural disasters in the U.S. are worsening because of global warming. The report cited heat waves, droughts, rising sea levels and the growing frequency and intensity of storms.

But instead of pointing at climate change, governors and lawmakers in some states have blamed the U.S. Army Corps of Engineers for worsening floods by the way it manages water along its network of dams.

Preliminary assessments compiled by The Associated Press have identified about $1.2 billion in damage to roads, bridges, buildings, utilities and other public infrastructure in 24 states from the floods, storms and tornadoes that occurred during the first half of 2019. Those states also have incurred costs of about $175 million in emergency response efforts and debris cleanup.

In addition, an AP survey of U.S. Army Corps of Engineers districts found that floodwaters this year breached levees in about 250 locations in Arkansas, Illinois, Iowa, Kansas, Missouri and Nebraska. Some levees crumbled in multiple spots, including one near Missouri's capital city that inundated the airport. When it's rebuilt, the floor of a new airport terminal will have to be 11 feet higher to meet federal flood-plain regulations, said Jefferson City Public Works Director Matt Morasch.

The Corps of Engineers estimates that levee repairs could top $1 billion in the Missouri River Basin, where most of the breaches occurred.

The nation's disaster costs for public infrastructure will undoubtedly rise throughout the year. The Corps of Engineers has yet to inspect all of the damaged levees; officials in Illinois, Louisiana and elsewhere are still assessing damage to their infrastructure after the flooding; and the annual hurricane season is just getting underway.

Beyond that, the AP's preliminary figures do not include damage caused by wildfires, which have become increasingly destructive in Western states.

The AP's research shows that Nebraska was one of the states hit hardest by the flooding, with a preliminary assessment of about $435 million in damage to roads, bridges, utilities and other public infrastructure from a March storm. Rain fell on frozen terrain, causing a sudden snow melt that sent huge chunks of ice barreling down swollen rivers.

Nebraska has a regional network of Natural Resources Districts that could direct local money toward flood protection. Like most states, it also budgets money to pay the state's share of FEMA disaster-recovery projects. The state plans to hire a contractor to help develop a long-term recovery plan.

But until now, the state has not had a coordinated strategy for taking steps to reduce flooding risks, said Bryan Tuma, who leads the daily operations of the Nebraska Emergency Management Agency.

Only a few states have pumped much of their own money into flood prevention.

Minnesota created a grant program in 1987 that has since awarded almost $525 million to local projects.

After extensive flooding in 2011, Iowa launched a unique program that lets local governments keep a portion of their growth in state sales-tax revenue to help finance levees, flood walls and other projects designed to hold back rising waters. The state expects to forgo nearly $600 million in revenue over 20 years to help pay for nearly $1.4 billion of projects in 10 cities. But applications for that program closed several years ago, leading Iowa legislators this year to put $15 million into a separate fund to pay for flood prevention and recovery.

In Texas, the proposed constitutional amendment creating a $793 million flood infrastructure fund is part of a broader package. Lawmakers among other things appropriated $638 million to help local governments pay their share of FEMA recovery and flood-protection projects, and $47 million to update or develop flood-risk maps.

Rep. Dade Phelan, a Republican whose district was swamped by Hurricane Harvey, said too many cities, counties and drainage districts have been going it alone instead of working together on regional flood-management plans. The scattered approach has resulted in "roads that act like dams" and neighborhoods built in flood zones, he said.

"There's never been an opportunity like there is now to have everyone sit down and do a cooperative, holistic approach to flooding in a particular watershed," Phelan said.

In Arkansas, Rapert began pursuing better levee policies four years ago, after flooding on his farmland along the Arkansas River.

The lawmaker discovered that the nearby levee hadn't been repaired after a 1990 breach and that its governing board was defunct. So he sponsored legislation allowing local officials to re-establish dormant levee boards and requiring annual reports to be sent to the state. Although Rapert's local levee was fixed, he said most of the districts haven't filed reports, raising questions about whether their levees are being maintained.

"Until there's a flood, nobody really cares about levees. But when there's a flood, everybody's worried about them," said Jason Trantina, a farmer and convenience store owner near Conway, who was appointed president of Rapert's local levee district when it was re-formed.

The improved levee worked this year, until it was finally overtopped by floodwaters that swamped Trantina's business.

Like his counterpart in Arkansas, Missouri Gov. Mike Parson has appointed a task force to examine the state's levee system, explore ways of better managing floodwaters, and prioritize state funding for flood recovery.

Parson also signed a budget that includes $2 million for a movable flood wall in Clarksville, a rural community of about 450 with a 19th-century downtown area that has been fighting an annual battle against the Mississippi River. After selling the town's visitor center to finance flood-fighting efforts, the town is again short on money and still needs additional grants to buy the $4.5 million flood wall.

"We have spent and spent and spent money that we don't have trying to defend against the flood," Clarksville Mayor Jo Anne Smiley said. "In my judgment, this is the answer to the survival of this town."