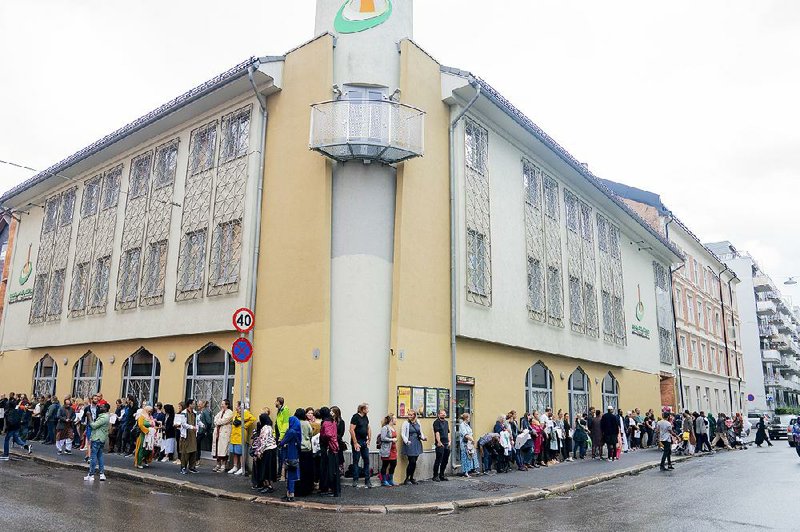 People gather Sunday in a show of support for the Al-Noor Islamic Center in Baerum, Norway.

MOSCOW -- A shooting at a mosque in Norway is being investigated as an "attempted terrorist attack" and its suspect also is suspected in his younger stepsister's slaying, police in the Norwegian capital said Sunday.

A man in his 20s was taken into custody after the shooting inside the Al-Noor Islamic Center that wounded one person, Oslo police said. Investigators so far think no one else was involved in Saturday's violence at the mosque, located in the Oslo suburb of Baerum.

When officers went to the shooting suspect's residence, they found the body of his 17-year-old stepsister, police said Sunday evening. The mosque suspect was being investigated in her death, police said.

The Oslo Police Department said forensic work at the mosque "confirms that several shots were fired, but the number of shots and the type of weapons are not yet established."

The department said it was working with the Norwegian Police Security Service, Norway's national domestic security agency, since the "investigation has given us a better overall understanding of the attack" at the mosque.

"The fact that the aggressor entered a mosque armed and from the investigation so far has been found to have expressed hostile attitudes against immigrants has led the police to investigate this attack as an attempted act of terrorism," the Police Department said in a statement.

BEIRUT -- Syrian government forces captured an important village in the northwestern province of Idlib on Sunday, drawing close to a major town in the last rebel stronghold in the country, state media and opposition activists said.

The capture of Habeet opens up an approach to southern regions of Idlib, which is home to some 3 million people, many of them displaced by fighting in other parts of the country. Habeet is also close to the town of Khan Sheikhoun, which has been held by rebels since 2012, and to parts of the highway linking the capital, Damascus, with the northern city of Aleppo, Syria's largest.

Syrian troops have been trying to secure the M5 highway, which has been closed since 2012. Idlib is a stronghold for al-Qaida-linked militants and other armed groups.

Syrian troops have been attacking Idlib and a stretch of land around it since April 30. The three-month campaign of airstrikes and shelling has killed more than 2,000 people on both sides and displaced some 400,000.

KARACHI, Pakistan -- Monsoon rains inundated much of Pakistan, leaving large parts of the southern city of Karachi underwater and causing at least 17 deaths as of Sunday.

Rescue official Anwar Kazmi said seven people died from electrocution and three people died after a roof collapsed in Karachi. The downpour and flooding began overnight, with authorities reporting more than 7 inches of rain in the port city.

Pakistan struggles to cope with the yearly monsoon, which runs from July to September and causes flooding across South Asia.

MOSCOW -- Russia's media oversight agency warned Google on Sunday to stop YouTube users from posting information about unsanctioned political protests or the Russian government would feel free to retaliate against the American company.

The Federal Service for Supervision in the Sphere of Telecom, Information Technologies and Mass Communication, or Roskomnadzor, communicated the demand after weeks of rallies over Moscow's City Council election.

Tens of thousands participated in a fourth-consecutive weekend protest of the exclusion of some independent and opposition candidates from the local election ballot, according to police and an organization that counts attendance at public meetings.

Unlike for demonstrations held the previous two weeks, when police made more than 1,000 arrests at each, organizers had a permit for Saturday's event. More than 200 people were reported arrested Saturday after some rally participants moved the protest from its sanctioned spot into the heart of the Russian capital.

Roskomnadzor said Sunday that it complained to Google in a letter about unspecified "structures" with YouTube channels using their accounts with the video sharing site to send push-notifications about unsanctioned gatherings, "including those aimed at damaging federal and regional elections."

YouTube is a Google subsidiary. If the Internet company based in California doesn't address the issue, Russia would have the right to retaliate, the agency said in a statement.

"In the event of Google not taking reactive measures, the Russian Federation will consider this as interference in the sovereign affairs of state and also as hostile and hindering to the conduction of democratic elections in Russia and will reserve for itself the right to adequate response," Roskomnadzor said its letter stressed. 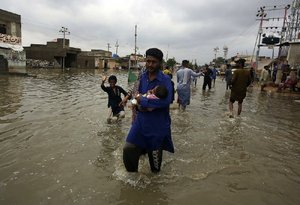 Photo by AP/FAREED KHAN
A man carries a child Sunday as he wades through floodwaters in Karachi, Pakistan.