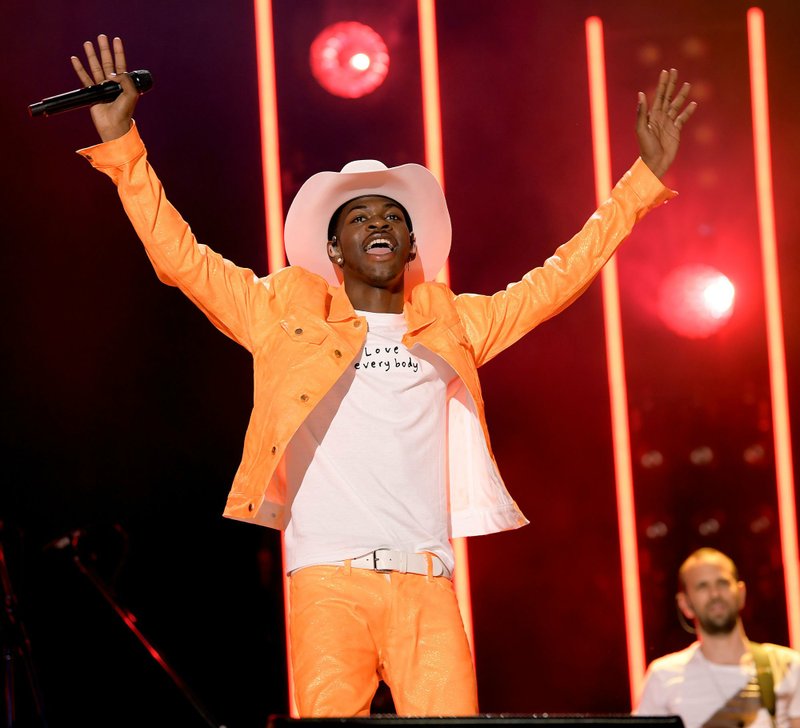 On June 30, the final day of Pride Month, the young country-rap sensation Lil Nas X came out to his 2.2. million Twitter followers.

"Some of y'all already know, some of y'all don't care. but before this month ends i want y'all to listen closely to 'C7osure'" he wrote, referring to a track from his debut EP 7, then the No. 1 rap album in the country.

"Embracin' this news I behold unfolding ... I know it don't feel like it's time," he raps. "But I look back at this moment, I'll see that I'm fine."

Overnight, the 20-year-old Atlanta native-born Montero Lamar Hill — became the biggest gay pop star in the world. That he did so in the orbit of hip-hop and country, genres that have historically snubbed gay artists, was groundbreaking.

"Lil Nas X reimagined an image of the Wrangler-wearing, horseback riding man's man into a young black representative of youth culture, got the attention of two traditionally macho cultures and then came out on the last day of Pride," said Roy Kinsey, a Chicago-based librarian and rapper at the forefront of Chicago's gay rap scene. "It was genius."

"It's hard to be out in genres where being gay, or expressing your sexuality, is frowned upon," added platinum rapper and singer iLoveMakonnen, born

Makonnen Sheran, who rose to fame as a protégé of Drake and came out as gay in 2017. "We are finally starting to see queer black men celebrated in the genre. But this is still a genre that has never been supportive of change."

Before the viral sensation of "Old Town Road" turned Hill into a pop star and gay icon, hip-hop was already reaching a turning point in its inclusivity, as more young black men are getting mainstream attention for exploring sexuality and interrogating masculinity in their work.

"I feel like I'm opening the doors for more people," Hill told the BBC recently. "That they feel more comfortable [being out]. Especially in the ... hip-hop community. It's still not accepted ..." (Hill declined to offer further comment for this piece.)

Hip-hop's refusal to embrace anything gay has been a blemish on the genre for as long as it has been around. Rap culture has always been powered by unbridled machismo, and one would be hard-pressed to not find a gay slur embedded in the lyrics of any of the genre's most famous architects. In fact, an entire lexicon dedicated to pointing out discomfort with gay men has permeated rap lyrics.

But as the old guard has been replaced with a younger generation unconcerned with rigid labels and unbothered by genre, today's rap and R&B scene isn't as exclusively heteronormative as it once was.

"We know folks in our community have always been religiously conservative, and being gay is still seen as taboo," said Ebro Darden, the global editorial head of hip-hop and R&B for Apple Music and host of Ebro in the Morning on New York's Hot 97 radio station. "But with entertainment becoming more accepting, music is going to be right there. This moment isn't some blip, because it's not a blip in society."

In 2012, avant-garde R&B-hip-hop singer Frank Ocean broke ground by boldly writing about falling in love with a man on the eve of releasing his breathlessly hyped debut album Channel Orange. "I don't know what happens now, and that's alrite. I don't have any secrets I need kept anymore," he wrote.

Ocean, who sprung from the rowdy, L.A.-based hip-hop collective Odd Future, went on to become a Grammy-winning star and in-demand collaborator for Jay-Z, A$AP Rocky and Travis Scott.

"Frank Ocean was the beginning of the revolution. But people had to warm up to it and sometimes the collective warmup can take more time than we think," said singer-songwriter Iman Jordan (Rihanna, Empire). "We've gotten used to seeing white queer men become megastars. I'm looking forward to the day when [more] black queer men are seen."

Over the past couple of years, Ocean's former Odd Future collaborator, Tyler, the Creator, has transitioned from a bratty provocateur who hurled gay slurs with reckless abandon into a thoughtful confessionalist, one who surprisingly and rather matter-of-factly raps about his own attraction to men. His latest effort, "Igor," is ostensibly a funky soap opera about a boy who loves a boy who loves a girl. "Take your mask off, I need her out the picture ... Stop lyin' to yourself, I know the real you," he raps. "Igor" became the first Billboard No. 1 album of his career, and his most acclaimed.

A diverse array of talents such as Brockhampton frontman Kevin Abstract, Steve Lacy (also formerly affiliated with Odd Future) and Skype Williams have all presented works this year that are freely crafted through a black gay lens.

Now Hill, a young black gay man, has the No. 1 song in America and just eclipsed a chart record that Mariah Carey and Boyz II Men set 23 years ago with "One Sweet Day," a song inspired by the AIDS crisis and the tragic peril it brought to so many black gay men in this country. ("Despacito" by Luis Fonsi, Daddy Yankee and Justin Bieber had shared the record.) 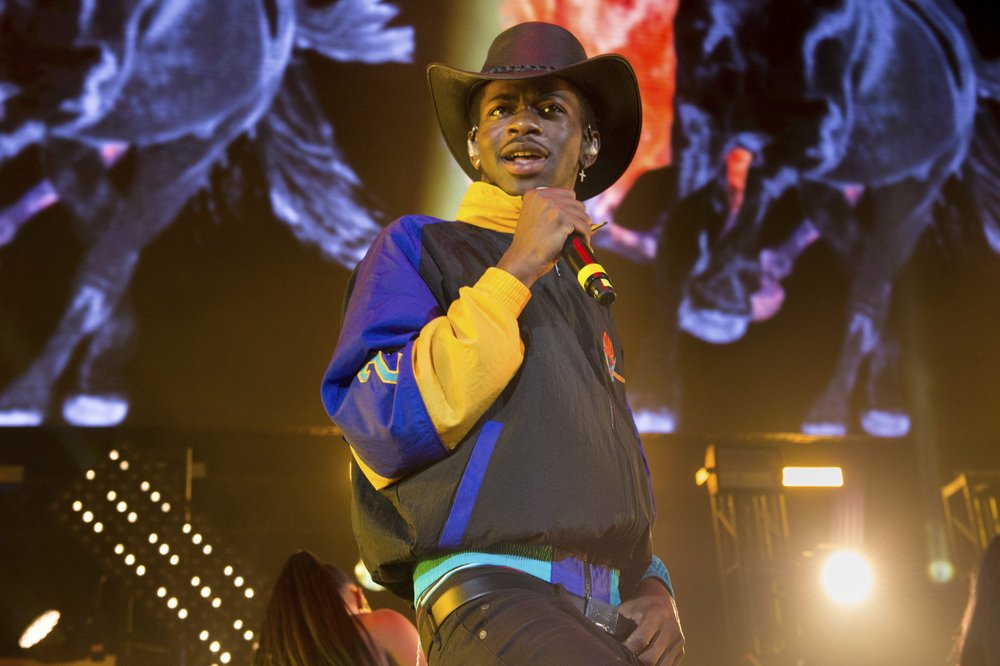 Lil Nas X performs at HOT 97 Summer Jam 2019 in East Rutherford, N.J., in this file photo. The rapper's viral "Old Town Road" has broken the Billboard record set by Mariah Carey's "One Sweet Day" for most weeks at No.1. (Photo by Scott Roth via Invision/AP)

While gay female performers such as Janelle Monae, Halsey, Young M.A. and Kehlani have been accepted with little fuss, there's now a growing surge of gay black male voices that are cutting through a genre built on heteronormative ideals.

"[Black] queer women are having a better time than men right now, creatively," says New York-based DJ, producer and rapper Skype Williams. "But male representation is moving in the right direction," he continued. "The catalyst for this shift though? I think when people in political power are [threatening] our basic rights, art and music gets more interesting."

It helps that the streaming era has disrupted how stars are created. Artists are no longer beholden to an ecosystem ruled by gatekeepers and pop music has gotten far less homogenized.

No genre of music offers better proof of this than hip-hop, where Generation Z rap stars are born on Soundcloud and TikTok and not radio. "Old Town Road" was a meme on TikTok — a popular lip-sync social media app — well before it was the inescapable radio earworm that reignited old debates about race and genre.

Furthermore, artists are playing to a generation far more open-minded and permissive when it comes to gender and sexuality than their older millennial counterparts. A report by trend forecasting agency J. Walter Thompson Innovation Group back in 2016 found that only 48% of 13- to 20-year-olds identified as exclusively heterosexual, compared to 65% of the generation before them.

The rest of the music industry is not that much farther ahead.

Pop music had lacked an openly gay superstar before Adam Lambert and Sam Smith made history with their chart debuts and Grammy victories, respectively. And despite their statuses as legendary rock hitmakers and gay icons, there was much hand-wringing over how bio-pics for Queen and Elton John would handle the sexual orientation of its subjects.

A LONG HISTORY OF HOMOPHOBIA

Since the genre's dawning, nearly five decades ago, homophobic attitudes in hip-hop have been the norm. N.W.A and the Beastie Boys boasted about their disdain for gay people in lyrics. 50 Cent once said it wasn't OK for men to be gay, but women who like women? "That's cool."

Nicki Minaj incited her sizable gay fan base by using a gay slur on her latest album. The late XXXTentacion was as famous for his contemplative music as the violent mythology he constructed to sell it — including gleefully boasting about beating a man within an inch of life because he looked at him too long. Just last year, Migos' Offset notoriously rapped, "I cannot vibe with queers." And Eminem has yet to retire his usage of "faggot" in the 18 years since he famously performed with Elton John at the Grammys as a PR-orchestrated act of goodwill against his viciously homophobic lyrics.

"The sport of hip-hop is very masculine and macho," says iLoveMakonnen. "How can we get the acceptance of people who haven't even accepted themselves? So much of gay culture is influencing the world, including hip-hop, and yet the culture is ashamed of us."

Even as Hill was celebrated for breaking rap's gay glass ceiling, the jokes about his sex life also made it into the news coverage. When asked about Hill's coming out, Young Thug — a rapper who jumped on an "Old Town Road" remix and has toyed with gender norms by dressing in couture gowns — said that Hill "probably shouldn't have told the world" he was gay. "He's young and backlash can come behind anything."

Apple Music's Darden says it like this: "Artists don't want to become a spokesperson, or be seen as a gimmick. Especially when it relates to their sexuality. It's still their life."