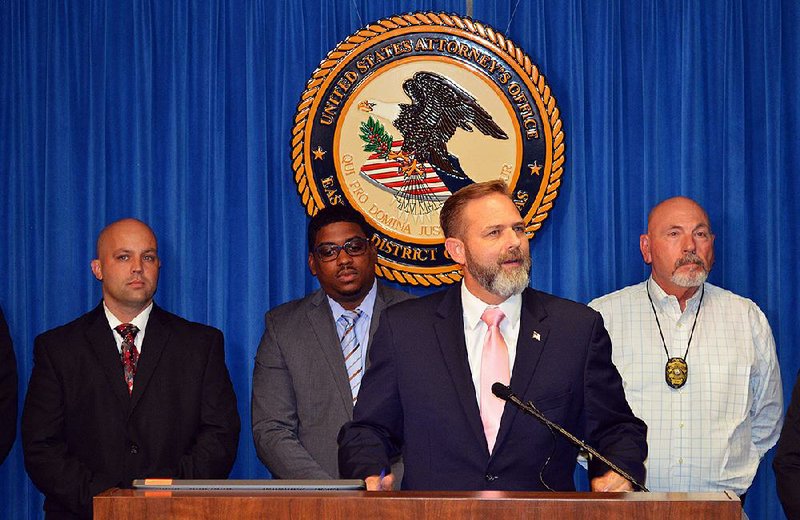 Cody Hiland, U.S. attorney for the Eastern District of Arkansas, announces the arrests Monday during a news conference in Little Rock.

Fifteen people accused of being involved in a drug operation are in custody as part of a federal drug investigation, the U.S. attorney for the Eastern District of Arkansas announced Monday.

Operation Mad Hatter, conducted by the Organized Crime Drug Enforcement Task Force, has led to the arrest of several drug-trafficking suspects and the seizure of 17 kilograms of methamphetamine, 4 kilograms of cocaine, 249 grams of crack cocaine, more than 1 kilogram of heroin, more than 200 diverted prescription pills, more than $107,000 in assets and numerous firearms, officials said.

Five people were arrested Monday morning after the unsealing of an indictment for 19 individuals who were charged by a federal grand jury Wednesday. Officials said 10 people had already been arrested during the investigation and law enforcement has made contact with the remaining four defendants. The operation was part of an ongoing DEA Domestic Cartel Initiative investigation.

"The investigation began in 2018, and the first arrests were made in February of 2019," said Hiland. "So it's important to us when we consider the violent crimes going on in central Arkansas [that] we apply consistent pressure to the criminal behavior that is ongoing in our district."

Chico Jahoney Russell, 42, of Little Rock and Terrance Deandre Jackson, 41, of Maumelle were named as the heads of the central Arkansas drug organization, King said.

[Video not showing up above? Click here to watch » https://www.youtube.com/watch?v=kVjDhIovkSk]

"They were the ones in charge here, but they were getting their drugs from bigger organizations outside of the state and eventually from cartels in Mexico that are supplying these drugs," King said. "When you are talking about [drug-trafficking organization] leaders at this level, you are talking about people who are selling to other distributors who are moving [drugs to] other distributors. Whenever you talk about these quantities that we are seizing, that supplies a lot of other drug-trafficking leaders of their own organizations."

Russell was arrested in 2003 in connection with a murder in Jefferson County and was sentenced to 25 years in prison, according to court documents. While in prison, he received an additional two years for stabbing another inmate.

The violent drug-trafficking operation was mainly located in Little Rock and Pine Bluff, King said, but the group was making attempts to expand beyond central Arkansas.

"They attempted to flood the Little Rock area and central Arkansas with drugs and [were] also trying to set up distribution networks in other parts of Arkansas," King said. "This organization had a propensity for violence, and more than one time we had to intervene in something bad that was about to happen, and we did that through a cooperative effort."

The nameless drug-trafficking organization also was well-organized, he said.

"I feel confident, with the people we arrested, that this cell has been dismantled," King said.