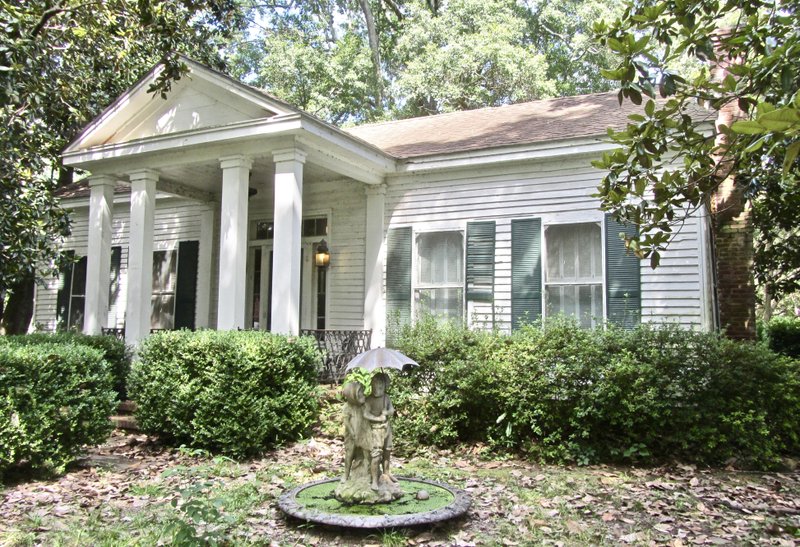 The historic "Dear Little House" is part of the Jacobs Park &amp; Museum property in Clarendon. (Photo by Marcia Schnedler, special to the Democrat-Gazette)

CLARENDON — While Clarendon is about to lose a prominent landmark, a little-known historic site in this White River town remains open to visitors as an evocative portal to the past.

With all appeals exhausted, the disputed demolition of the U.S. 79 bridge is primed to proceed. That's despite widely publicized efforts to save the 88-year-old span as a potential attraction for bicyclists and other day-trippers.

Clarendon, like many communities in eastern Arkansas, is struggling with economic downturn and population loss. But its more prosperous times are denoted by more than a dozen properties on the National Register of Historic Places.

One of them, Jacobs Park & Museum, offers a notably vivid window on bygone days. The two-acre site at 500 N. Main St. contains a house built around 1870 and preserved inside much as when last occupied almost a half-century ago.

The single-story residence, with an entry pavilion supported by four square columns, is known as the "Dear Little House." It's where inspirational author Margaret Moore Jacobs lived with her auto-dealer husband, Jake, after they had the building moved across the street. He died in 1965 and she a decade later.

Their presence in the years between the two world wars is almost palpable amid vintage furniture and other antique pieces — with a color theme of pink and red. Visitors can admire the setting under the guidance of her nephew, Burton Moore. His son, John, helps care for the property.

On one table lie handwritten pages of the author's work, which included books such as Roses Every Day, My Master Has a Garden and A Lifetime of Sundays. She also wrote regularly for a number of magazines.

Unlike some former residences open to tourists across the nation, this house still feels very much lived in. There's a sense that Margaret Moore Jacobs might come through the front door any time now.

In the main bedroom, a proliferation of hats, some in round boxes, echoes a time when no self-respecting woman would appear in public without one. And Jacobs had an avid fancy for hats.

The dining-room table is set with lovely china and crystal. Notable among furnishings is a piano made in New York, with delicate inlays and mother-of-pearl keys. A sense of comfortable elegance prevails.

Behind the house stands a former one-room schoolhouse that was moved to the location and turned into a chapel of sorts. Scattered in the yard are statues of children, deer and dogs. A large bell rescued from a church in Helena-West Helena hangs in a cradle.

Among Clarendon's other sites on the National Register, the most imposing is Monroe County Courthouse. Dedicated in 1911, it was designed by the prominent architect Charles L. Thompson.

The brick building's most striking feature is a soaring clock tower on its main facade. Low octagonal towers topped by tile roofs stand at each corner of the building, while the interior is graced by marble wainscotting.

Like the doomed bridge and the "Dear Little House," the courthouse can remind visitors of brighter days in Clarendon, which has lost more than one-third of its population since 1970. The most determined of its 1,600 or so remaining residents, like Burton Moore, aim to stay the course.

Moore-Jacobs House, 500 N. Main St., Clarendon, usually can be toured from 9 a.m.-5 p.m. Monday-Friday by calling ahead to Burton Moore, (870) 747-1085. He will meet visitors at the site. There's no admission charge, but donations are welcome. More details are at jacobstrust.org.