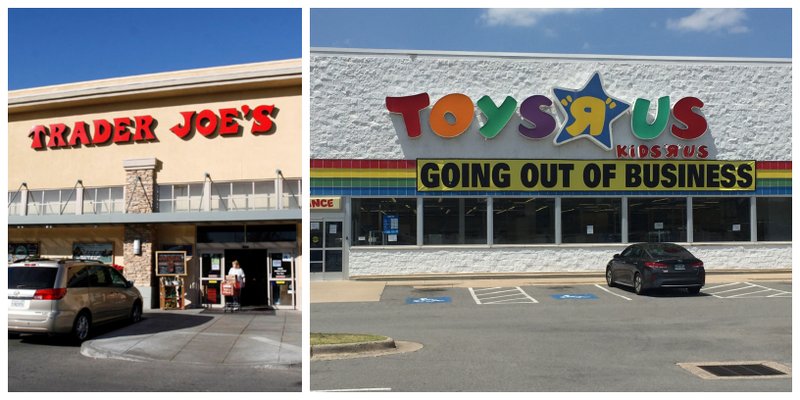 Trader Joe's, the California-based grocery store chain which built its popularity emphasizing private-label products beginning with granola, has won approval to retrofit part of a former Toys R Us location in west Little Rock to house its first Arkansas store.

Arkansas, with a population of slightly more than 3 million, is the most populous state without a Trader Joe's. The chain has 488 locations in 41 states and the District of Columbia, according to its website.

The work allowed under the permit is valued at more than $1 million. It includes new systems for heating and cooling the store and refrigeration, plumbing and electrical work, as well as the installation of grocery-store fixtures, according to the permit, which the city approved last week.

The permit application was filed by Jeda Design in July. The Santa Clara, Calif.-based design firm's clients include Trader Joe's.

Attempts Monday to confirm from another source that the company plans to open a store in Little Rock were unsuccessful.

The firm's marketing documents list about half of the available space in the Toys R Us store front as still available for lease. The remaining 15,000 square feet is listed as reserved for what is only described as a "national retailer."

A spokesman for Trader Joe's didn't return a phone call for comment by Monday evening.

Word that Trader Joe's was coming to Little Rock was first reported by the online blog, Rock City Eats, on May 19. Demand for the store spawned a Facebook page called "Bring Trader Joe's to Little Rock" that has drawn more than 6,000 "likes."

The demographics include a daytime population of 367,489 spread among 134,591 households within a 10-mile radius of the location. The average annual household income within that demographic is $76,399.

The Trader Joe's will be flanked by a Barnes & Noble Bookstore and an AT&T store on one side and a PetSmart on the other. A competitor, Whole Foods Market, sits a little more than a half mile away at the intersection of Bowman Road and Chenal Parkway.

Trader Joe's traces its roots to a chain of convenience stores bought by founder Joe Coulombe in 1958 and called Pronto Markets.

Coulombe opened the first Trader Joe's in 1967 in Pasadena, Calif. He introduced the grocer's first private-label product -- granola -- in 1972. The private-label concept, which kept marketing costs and other fees down, eventually included many other Trader Joe's products.