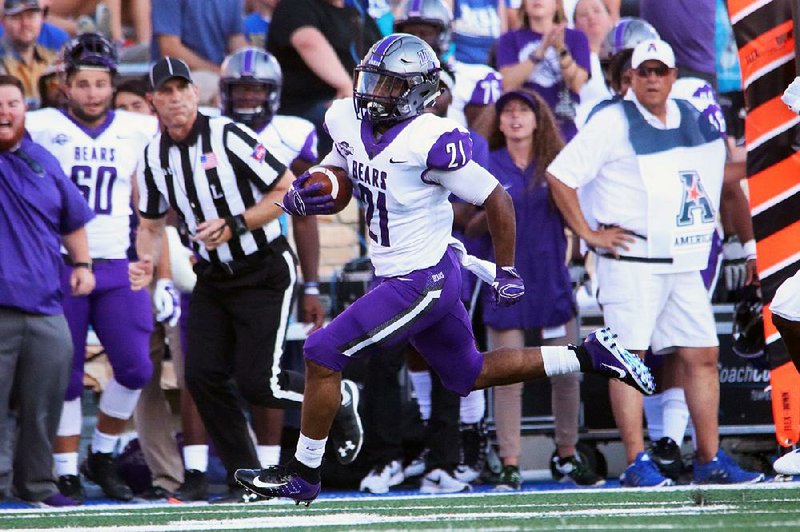 Kierre Crossley (center) said he and teammate Carlos Blackman push each other at the running back position for Central Arkansas. The Bears open the season Aug. 29 at Western Kentucky.

Together, University of Central Arkansas running backs Carlos Blackman and Kierre Crossley have created one of the most dynamic rushing attacks in the Southland Conference over the past two years.

"It's just two different types of backs, two different approaches," Blackman said Monday at UCA's media day at Estes Stadium. "You never know what you're gonna get. Sometimes we're both in the game, sometimes it's one of us, but it's fun playing with [Kierre]. He leans on me, I lean on him. We help each other out."

Blackman, a senior, and Crossley, a junior, have each finished inside the top 11 in rushing in the Southland each of the last two seasons.

Last year, Blackman, a first team all-conference selection, was fourth in the league after totaling 786 yards and 9 touchdowns, while averaging 4.8 yards per carry. Crossley, meanwhile, finished 11th, rushing for 600 yards, 2 touchdowns and averaging 5.7 yards per attempt.

The year prior, it was Crossley who led the way, accounting for 780 yards and 4 touchdowns while averaging 5 yards per carry. He was named the 2017 Southland Conference Freshman of the Year. Blackman finished just shy of his teammate, tallying 770 yards, 9 touchdowns and averaging 4.5 yards per attempt. The two finished No. 4 and No. 5 in rushing, respectively, in the Southland. Blackman also was UCA's leading rusher as a freshman in 2016, while Crossley redshirted.

After a disappointing 6-5 finish in 2018, both are hungrier than ever to make a difference in 2019, possibly their last season together in the Bears' backfield.

"I feel like we push each other a lot, mainly because we got two different styles," Crossley said. "We both talked about going over 1,000 [yards]. That's the goal for both of us. We're gonna push each other. Hopefully one of us does it. Hopefully both of us do it."

What makes Blackman and Crossley so effective as a tandem is that the two are nothing alike.

Blackman, a Gosnell High School product, is much bigger, checking in at 6-1, 228 pounds. He's a workhorse who relishes running in between the tackles and can play every down. Crossley, a native of Everman, Texas, which is just south of Fort Worth, stands 5-8, 178 pounds and is UCA's version of the Philadelphia Eagles' Darren Sproles, utilizing more quickness and straightaway speed.

"I think they're extremely dangerous," UCA first-year running backs coach Jacoby Walker said. "[Carlos] is very, very shifty, very sudden for his size. A lot of people think he's a power back. I see him kind of as a slasher. He does win the one-on-one a lot, which is really, really good.

"With [Kierre], he's extremely good in space. I call him a dodger. He's not really a juker. He knows how to make people miss, and he does a lot of good things well as far as catching the ball out of the backfield, draws, screen game, and then just getting him to the second level."

Walker, who played at Arkansas for two seasons before transferring and finishing his career at UCA from 2012-14, has been fortunate to inherit two of the top backs in the Southland, as well as one of the deepest and most talented position groups on UCA's roster, in his first Division I coaching job.

He joined the Bears' staff this spring after serving as the offensive coordinator and quarterbacks coach at Dallas Molina High School last year.

Along with Blackman and Crossley, UCA also has five other running backs on the depth chart, including experienced senior backup D'erek Fernandez, redshirt freshman Cameron Myers, who's added 20 pounds, and true freshman Marshun Douglas, who Walker estimated as UCA's fastest back.

Walker said as many as five backs could receive playing time this season, and he even likened UCA's backfield to that of the Razorbacks' running back room while Walker was in Fayetteville, which included Ronnie Wingo, Knile Davis, Dennis Johnson and Broderick Green. Wingo, Davis and Johnson all went on to play in the NFL.

"We had four big-time guys, and I kind of always tell them, comparing them, like, 'Hey, you remind me of this guy so much,'" Walker said. "I kind of see glimpses of those guys in this group, so I know that they got a lot of potential."

The two most important, though, are still Blackman and Crossley, and the duo's production this year will once again be a major factor in how far the Bears go in 2019.

As far as how the carries will be divided again this season, UCA Coach Nathan Brown said he and offensive coordinator Ken Collums like to roll with whoever they feel has the hot hand, and that can change series to series and game to game.

"[Blackman and Crossley] feed off each other," Brown said. "They're both gonna be crucial to our success this year. We're gonna ride their backs. Our season is gonna go as they go." 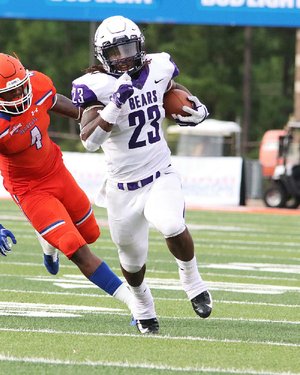 Photo by Photo courtesy of University of Central Arkansas
Central Arkansas running back Carlos Blackman scored nine touchdowns in 2018 for the Bears, who finished 6-5.