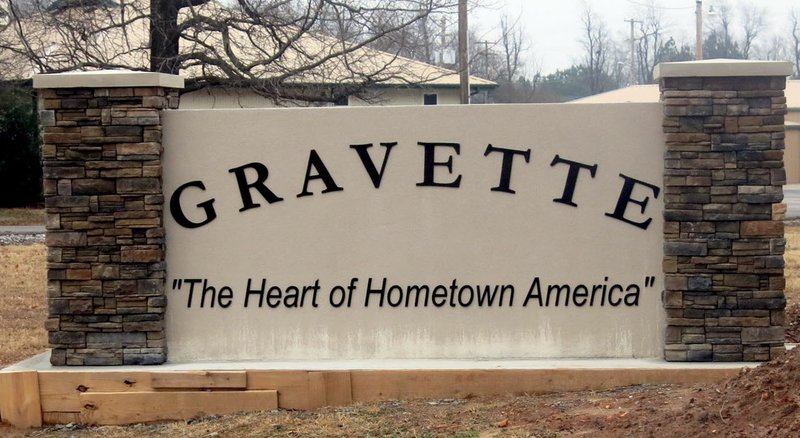 FILE - A welcome sign in Gravette is shown in this file photo.

After 121 years in business as the Bank of Gravett, the bank has changed the spelling of its name to conform with that of the small Benton County town in which it was founded.

Bank President Brian Glenn revealed the new "Bank of Gravette" name and logo at a groundbreaking ceremony Friday for an extensive remodeling of the main office. The bank said in a June news release that its primary location, at 211 Main St. S.E. in Gravette, would undergo major renovations beginning Thursday. The project is expected to be completed in March or April, according to the release.

The bank's original name matched that of early denizen E.T. Gravett, who oversaw the platting of the town. According to the online Encyclopedia of Arkansas History and Culture, "no one is sure how or when the town got the extra 'e' at the end of its name. The most popular story involves confusion within the postal service and a town with a similar name."

Rickie Stark, the bank's vice president of business development, wrote in a Facebook post Friday that along with the physical changes being made to the bank, "we have decided it was time to start spelling it the 'right' way."

One of Arkansas' oldest banks, the Bank of Gravette was chartered in 1898, according to its website. Besides branches in Hiwasse and Centerton, the bank has its headquarters, a drive-thru location and a separate data center in Gravette.

According to the release, the renovated building will have a new floor plan as well as more office windows, restrooms compliant with the Americans with Disabilities Act, two large-screen TVs in the lobby, a coffee area for customers and a three-lane drive-thru on the south side.

Legacy BancShares Inc., owner of Legacy National Bank of Springdale, acquired the Bank of Gravette in July 2018. The terms of that transaction were not disclosed.