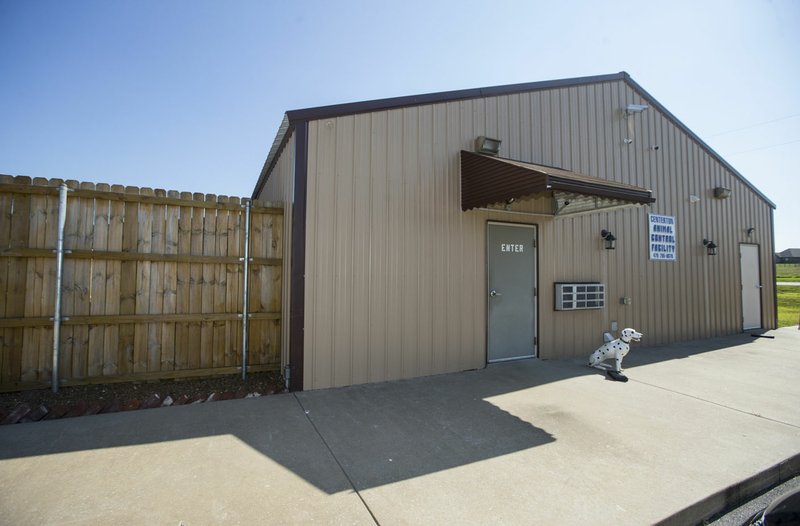 A view of the front entrance Friday at the Centerton Animal Shelter. Bentonville animal control currently takes dogs to the Centerton facility.

BENTONVILLE -- Mayor Stephanie Orman plans to ask the City Council to approve building a city-owned and operated animal shelter, she said in a news release Tuesday. The move would end a joint venture planned with the Walton Family Foundation.

Gonzalez said the foundation is too early in the process to know whether it would be the sole financial supporter of the center.

The City Council in April voted to support a public-private model for the shelter, but Orman said at a July meeting of the Pet Resource and Services Steering Committee she didn't want to partner with a private entity. The Arkansas Municipal League advised her against doing so, she said, citing lawsuits against Best Friends involving dog bites.

The committee spent more than a year working on plans for a shelter in Bentonville and proposed Best Friends operate it. Best Friends partners with cities, such as Los Angeles, to run animal shelters.

"We appreciate the time the task force has given to work on this issue," Orman said. "However, after consideration of public safety and fiscal concerns, it is my view that the best decision for the city at this time is to move forward with a city-operated solution that will meet the needs of the city with regard to animals."

The tentative plan was for the Walton Family Foundation, Best Friends, the city and public fundraising to pay for the construction of an $8 million to $10 million building, although no entity committed any money, council member Tim Robinson said.

Best Friends would have provided the staff to operate the shelter, with Bentonville animal control officers bringing the animals, Robinson said. Bentonville would have paid roughly $500,000 a year to take animals to the shelter, which would put the city on par with how much other cities in Northwest Arkansas pay to run animal shelters in terms of the percentage of their overall budgets, he said.

The committee was considering 4 to 5 acres off Southwest Eighth and I streets owned by Walmart for the shelter. Robinson said Walmart was open to some of its land being used for an animal shelter.

The city will now look for other property, said Debbie Griffin, spokeswoman for the city.

The city's proposed animal shelter will offer services such as adoption and spay/neuter, Griffin said.

The intent of the pet resource center would be to offer complementary services not offered at city shelters, Gonzalez said.

A representative of Best Friends didn't respond to a request for comment Tuesday.