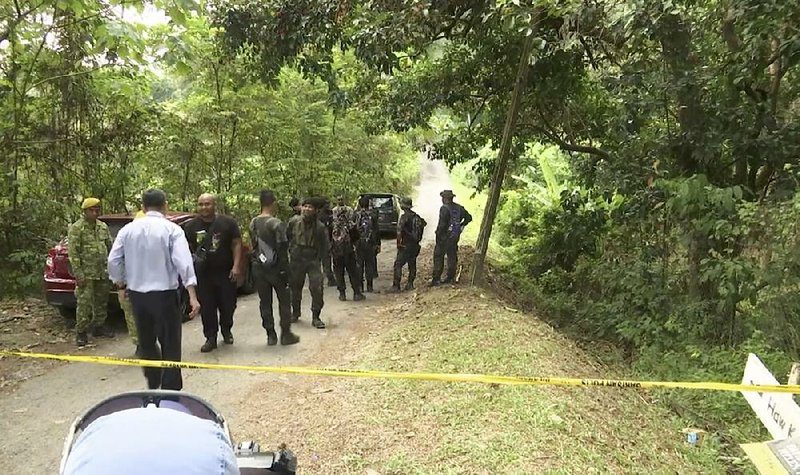 SEREMBAN, Malaysia -- Malaysian police said Tuesday that the family of a missing 15-year-old London girl has identified a naked body found near the nature resort where she disappeared over a week ago.

Police said rescuers earlier Tuesday found the body of a female Caucasian beside a small stream in steep terrain about 1½ miles from the Dusun eco-resort in southern Negeri Sembilan state, where Nora Anne Quoirin disappeared Aug. 4. The body was airlifted to a hospital for identification and autopsy.

"The family members have been brought here to identify the body that we recovered earlier, and the family has confirmed that the body is Nora Anne," Negeri Sembilan Police Chief Mohamad Mat Yusop told reporters at the hospital morgue.

The girl's family arrived Aug. 3 for a two-week stay at the Dusun, a small resort located in a durian orchard next to a forest reserve 39 miles south of Kuala Lumpur.

Police believe that the teen, who had learning and physical disabilities, climbed out through an open window in the living room of the resort cottage. They listed her as a missing person but said the investigation included possible criminal aspects.

A senior pathologist will conduct a postmortem today.

The two-day cease-fire -- proposed by the U.N. -- was the first since the self-styled Libyan National Army led by commander Khalifa Hifter launched an offensive in April to capture Tripoli from a U.N.-supported but weak government.

The strikes focused on the road linking the city center with a shuttered old airport that Hifter's forces took back in April, as well as the neighborhoods of Wadi el-Rabie, Khallat el-Fujan and Suq al-Jumaa, the officials said.

The militias allied with Tripoli's U.N.-backed government also shelled Hifter's forces in the southern and eastern outskirts, they said.

Tripoli health officials said no civilian casualties were reported Tuesday. All officials spoke on condition of anonymity because they were not authorized to talk to reporters.

KINSHASA, Congo -- Two Ebola patients who were treated with new drugs in the city of Goma in eastern Congo have been declared "cured" and returned to their home, doctors said.

Top doctors fighting Ebola quickly used the case Tuesday to press the message that people can recover from the potentially deadly disease if they seek proper care.

Ebola is dangerous, but it is also curable with correct treatment, said Dr. Jean-Jacques Muyembe, director of Congo's National Institute for Biomedical Research.

"These cases were detected very quickly. The husband was infected, he was at home for 10 days, and his wife and son were infected," said Muyembe. "As soon as the response teams detected these cases, they brought them here to the treatment center. We gave them treatment that is effective, and here in a short time both are cured."

Muyembe said two new drugs "are now used to treat Ebola patients because, according to the studies and the results we obtained in the lab, these are the two drugs that are effective."

SYDNEY -- A knife-wielding man with a history of mental illness is suspected of slaying a woman in a downtown Sydney apartment with a butcher's knife before wounding another woman nearby and attempting to stab other people Tuesday while yelling "Allahu akbar," or "God is great," police and witnesses said.

Police have not labeled the rampage an act of terrorism, although the 21-year-old assailant -- who was restrained by members of the public before being arrested -- had collected information on his computer about mass killings in North America and New Zealand, New South Wales state Police Commissioner Michael Fuller said.

Witnesses said the assailant Tuesday was carrying a 12-inch knife and attempted to stab multiple people near a busy intersection in Australia's largest city about 2 p.m.

Police said a man was arrested and that a 41-year-old woman with a stab wound in her back was taken to a hospital, where she was listed in stable condition.

Police said the body of a 21-year-old woman was later discovered in a nearby fourth-floor apartment.