Broncos' Sanders working his way back 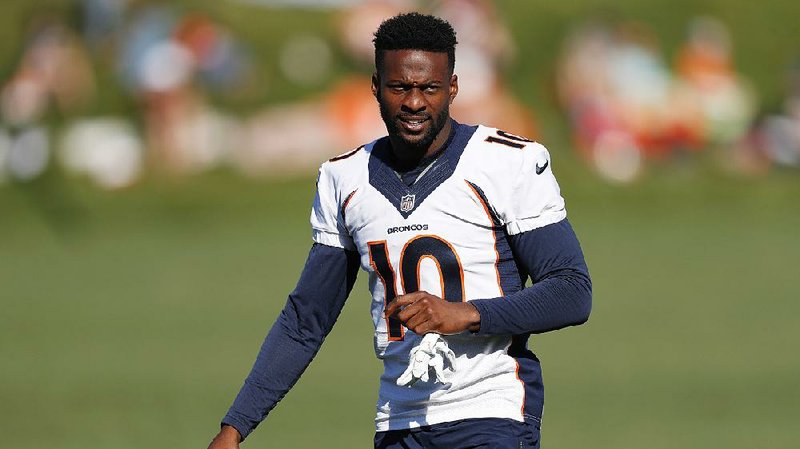 ENGLEWOOD, Colo. -- Emmanuel Sanders' comeback was more complex than he had let on.

The Denver Broncos' 32-year-old receiver revealed this week that he had surgeries on both ankles in the offseason, one to repair his left Achilles tendon, which he tore in practice last December, and one to fix a severely sprained right ankle a month later.

Sanders recounted fans approaching him at the mall last winter and asking, "How's the Achilles doing?" while pointing at the boot on his right foot.

"I'm like, 'I'm good. But it's not my Achilles. It's actually my ankle,'" Sanders said Tuesday. "But I kind of kept that under wraps because I didn't want you guys writing stories of hey, there's no way he can battle through two surgeries. So, I just said I'm going to keep it under wraps and let you guys know once I get myself back healthy and feeling good."

He's at that point now.

Sanders methodically ramped up his workload since training camp began July 18 to the point that he has participated in every 11-on-11 period so far this week. He plans to face the San Francisco 49ers in two joint practices this weekend, and if all goes well, he'll go against them Monday night in the Broncos' third preseason game.

"Obviously, everybody's like, 'You're playing in the preseason coming off an Achilles?!' But at the same time, I want to get in a groove before the first regular season game," Sanders said.

Sanders initially injured his right ankle midway through the 2017 season and missed four games down the stretch. "We were going to have surgery last spring but we didn't do it because it was feeling good," he said.

That turned out to be a big mistake when the pain returned during his conditioning test at the start of training camp last summer, "and I thought there's no way I'm going to make it through the season on this," Sanders said.

He didn't make it through the year, tearing his left Achilles tendon at practice on Dec. 5, something he told 9News he believes resulted from favoring his right ankle all season.

So, a month after his Achilles tendon surgery, Sanders had what's known as a "tightrope" procedure on his right ankle. The surgery is being used in athletes to accelerate recovery from high ankle sprains. Alabama quarterback Tua Tagovailoa had the same operation last December and played in last season's national championship four weeks after suffering a high ankle sprain in the SEC Championship Game.

Sanders said that while his left foot still gets sore, "it's minute compared to what I was dealing with" in his right ankle, which is now pain-free.

"I feel like all the doctors, they done repaired me back to myself," Sanders said.

His goal now is to get his stamina up so he can run 30 to 40 routes on game days.

Sanders said "the chemistry is coming," with new quarterback Joe Flacco. "Everything is looking good. It's all about going out and just trying to master this offense so that when (the opener against Oakland) comes around we're putting up points and we're hooking up on deep passes and trying to create explosive plays.

"Because that's what it's about: it's not about the dink and dunk; it's about those chunk explosive plays. So, that's what I know that I have to bring to the table."