Chain takes issue with others using its 'Taco Tuesday' 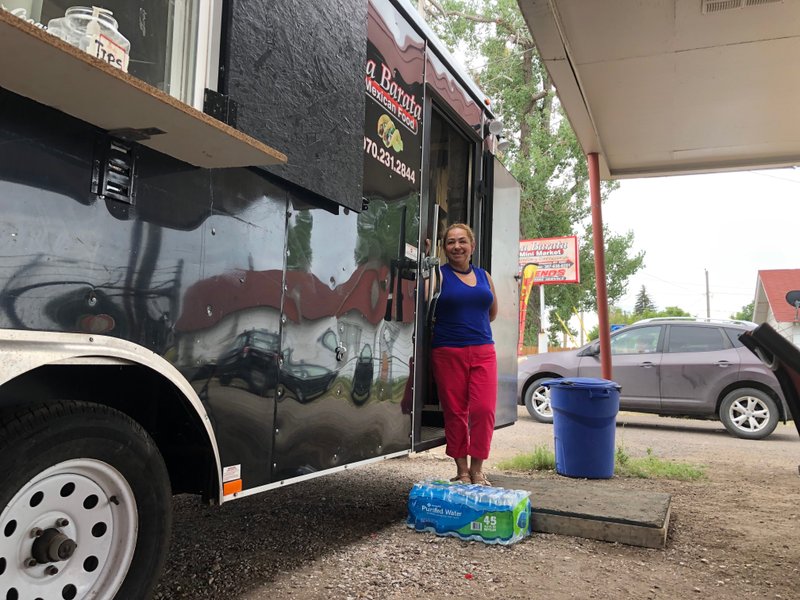 In this Aug. 1, 2019 photo Nena Hermosillo stands outside her taco truck in Cheyenne, Wyo. Cheyenne-based Taco John's, which has nearly 400 locations in 23 states, recently sent Freedom's Edge Brewing Co. in Cheyenne a cease-and-desist letter for using"Taco Tuesday" to advertise the taco truck parked outside on Tuesdays. (AP Photo/Mead Gruver)

CHEYENNE, Wyo. -- "Taco Tuesday" may be a well-known term for a themed dinner night out or at home, but as restaurants across the U.S. have learned, it's also trademarked.

Cheyenne-based Taco John's -- which has nearly 400 locations in 23 states -- put its legal stamp on "Taco Tuesday" 30 years ago and has since zinged cease-and-desist letters at offenders far and wide.

Now, a recent example is stirring a debate that hits close to home for the fast-food chain.

Taco John's last month sent a warning to a brewery five blocks from its national headquarters for using the term to advertise a taco truck that parks outside its establishment once a week.

"We certainly appreciate our fellow community member's enthusiasm for tacos on Tuesdays, and the term is often used inadvertently," read the letter addressed to "Sir or Madam" at Freedom's Edge Brewing Co. "However, it is still extremely important to us to protect our rights in this mark."

Freedom's Edge took the matter to Facebook, and the comments poured in.

"We have nothing against Taco John's but do find it comical that some person in their corporate office would choose to send a cease and desist to a brewery that doesn't sell or profit from the sales of tacos," the brewery wrote.

Some people rallied to the chain's defense, pointing out that Taco John's itself started as a humble food trailer 50 years ago and legitimately secured the trademark, while others said it's time for Taco John's to lighten up.

"I know that we've been seen as a bully, some corporate giant that is protecting this brand, but really it's us protecting the little guy," Maara told the audience. "Great ideas can come from the most unexpected places, and when they do, we should protect it."

When it comes to "Taco Tuesday," a legal expert doubts Taco John's has much of a case.

Like "raisin bran," "escalator," "nylon" and other formerly trademarked products, "Taco Tuesday" has suffered from "genericide," said Seattle-based attorney Michael Atkins. The term has become too well-known to continue to be identified with a particular company, he said. The term even made a fairly significant appearance in The Lego Movie, a 2014 children's film based on the popular plastic toys.