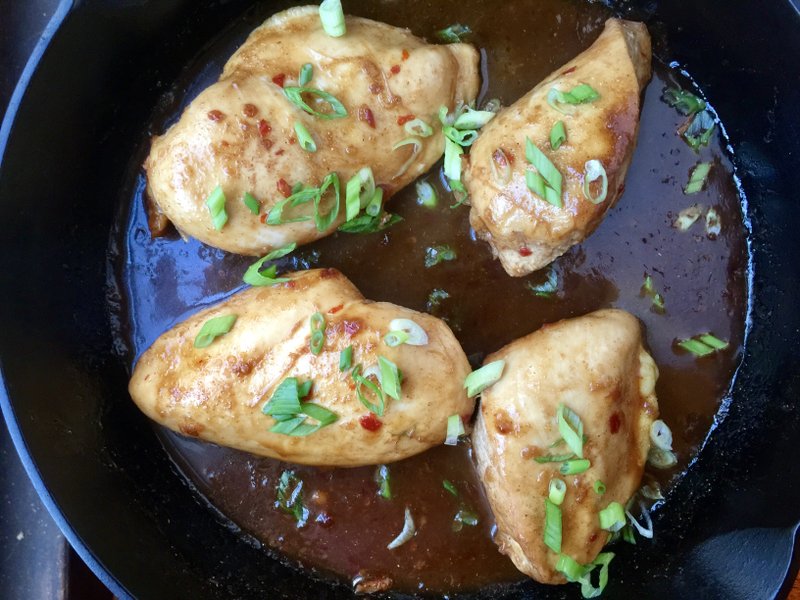 As I was sitting down to type this week's recipe, I received a well-timed, relevant email from a reader curious about my thoughts on boneless, skinless chicken breasts and how they seem to be tougher than in the past.

Tough was exactly the word my husband and I used when we tasted this recipe.

The reader's theory is that it is because chickens are now being bred for quantity — large, meaty breasts — and not quality. Commercial chickens are much larger today than they were half a century ago. According to some sources, chicken breast size has increased by 80% and their total weight has quadrupled since the 1960s.

I tend to blame the cook (yours truly) when chicken turns out tough as I'm more likely to overcook it than other proteins, but it may not be all my fault.

A simple Google search of "tough chicken" led me down a rabbit hole full of answers and more questions.

Some chickens are affected by a condition known as "woody breast" a (harmless) abnormality that causes breast, and sometimes thigh, meat to be hard to the touch with poor texture and color.

The exact cause of woody breast is unknown, but some believe it is a result of chickens being bred to grow larger and faster. Other scientists believe the condition may be genetic and as chicken producers have focused on growing larger, faster-growing breeds, the condition has become more common. However, woody breast is unlikely to be the cause of widespread tough chicken breasts cooked at home because affected breasts are often diverted from the supply chain during processing and used for ground chicken.

Another condition affecting modern chickens is white striping — striations that run parallel to the muscle. Again, the exact cause is not known, but the condition appears to be more common in larger chickens and may be associated with increased growth rate.

Meat with striations, according to a study published in Poultry Science is higher in fat than meat without the striations. The striations are also linked to tougher meat with less flavor. A University of Arkansas and Texas A&M study found woody breast and white striping affected water loss and marinade absorption, both factors that contribute to flavor and texture of cooked chicken.

However, there are no risks associated with consuming meat from chicken with woody breast or white striping.

So what's a consumer to do?

First, cook chicken carefully — chicken is safe and done when it reaches 165 degrees. Don't overcook it. Dark meat is a little more forgiving and more tender, so consider boneless, skinless thighs if breasts give you trouble.

Second, if white striping concerns you, pay attention while shopping and select breasts with minimal striping.

Juice and zest of 1 lime

If using chicken breasts, cut breasts into pieces of equal thickness, if necessary; set aside.

In a large bowl, whisk together the garlic, ginger, honey, chile sauce, lime juice and zest, soy sauce and coriander. Add chicken and turn to coat.

Add the vegetable oil to a large oven-safe skillet (I used cast iron) and swirl to coat. Transfer chicken to the skillet and pour the marinade over the top.

Bake, turning chicken pieces occasionally, for 20 minutes or until chicken reaches an internal temperature of 165 degrees.

Garnish with green onions, if desired.