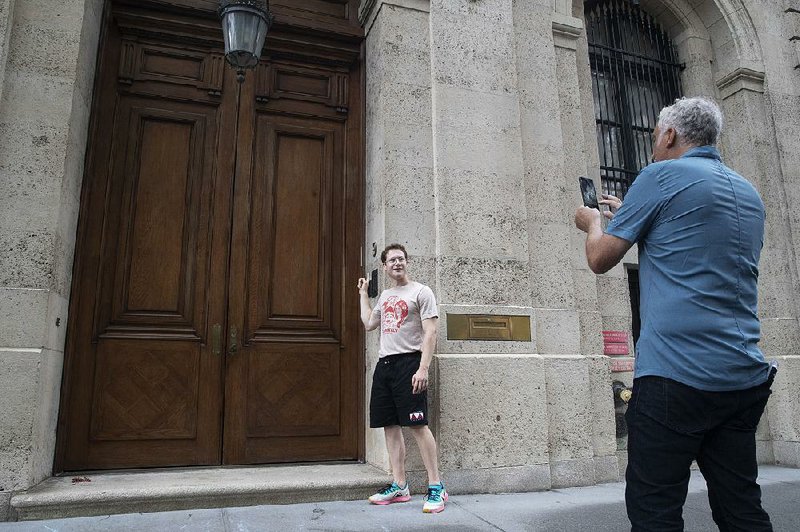 A man poses for a photo Tuesday outside Jeffrey Epstein’s townhouse in Manhattan’s Upper East Side.

NEW YORK -- The warden at the federal jail where Jeffrey Epstein died over the weekend was removed Tuesday and two guards who were supposed to be watching the financier were placed on leave while federal authorities investigate.

The move by the Justice Department came amid mounting evidence that the chronically understaffed Metropolitan Correctional Center may have bungled its responsibility to keep the 66-year-old Epstein from harming himself while he awaited trial on charges of sexually abusing teenage girls.

Epstein was taken off a suicide watch last month for reasons that have not been explained, and he was supposed to have been checked on by a guard every 30 minutes. But investigators learned those checks weren't done for several hours before he was found Saturday morning, according to a person familiar with the case who was not authorized to discuss it and spoke on condition of anonymity.

Guards on the unit are now suspected of falsifying log entries to show they were making the checks, according to another person familiar with the probe.

Surveillance video reviewed after the death showed guards never made some of the checks noted in the log, according to the person, who also wasn't authorized to disclose information and thus spoke on condition of anonymity.

Attorney General William Barr ordered warden Lamine N'Diaye temporarily assigned to the Bureau of Prisons' regional office while the FBI and the Justice Department's inspector general investigate. The two guards were not identified.

While the exact manner of Epstein's death has not been officially announced, a second person familiar with operations at the jail said the financier was discovered in his cell with a bedsheet around his neck. That person also spoke on condition of anonymity for the same reason.

Under the jail's protocol, Epstein would not have been given a bedsheet had he been on suicide watch. He was placed on suicide watch last month after he was found on the floor of his cell with bruises on his neck, but he was later returned to the jail's special housing unit for inmates needing close supervision.

On Monday, Barr said that he was "frankly angry to learn of the MCC's failure to adequately secure this prisoner," adding: "We will get to the bottom of what happened, and there will be accountability."

The warden of an institution in upstate New York has been named the acting warden at the jail.

Eric Young, president of the union council that represents prison guards, said that such reassignments are routinely done to "protect the integrity of investigations until any formal action, if any, is warranted."

One of Epstein's guards the night he died was not a regular correctional officer, one of those familiar with the case said. Union local President Serene Gregg told The Washington Post that one guard was a fill-in who had been pressed into service because of staffing shortages.

Epstein was being held without bail on federal sex trafficking charges that could have brought 45 years in prison.