Flaherty on target for Cardinals 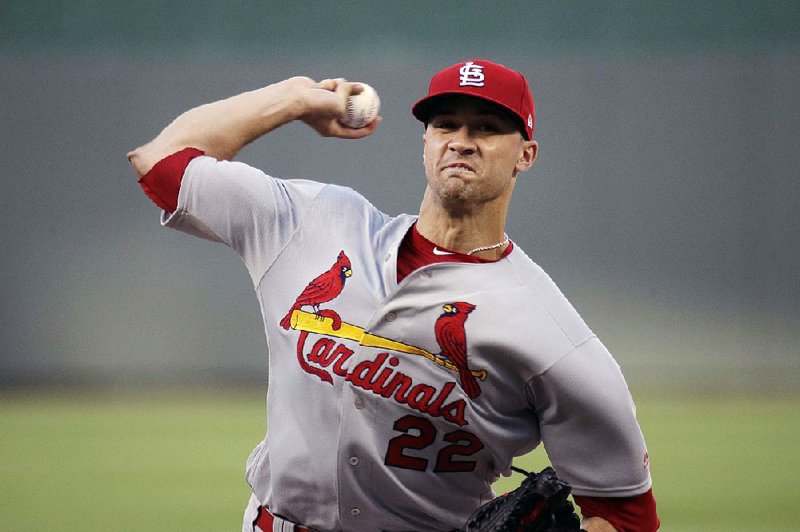 Starting pitcher Jack Flaherty allowed 3 hits with 1 walk and 7 strikeouts over 7 innings on Tuesday to lead the St. Louis Cardinals to a 2-0 victory over the Kansas City Royals at Kauffman Stadium in Kansas City, Mo.

The Royals probably have a few choice words to describe Flaherty, too.

The right-hander tossed seven innings of three-hit ball in a dominant performance Tuesday night, and Tommy Edman and Paul Goldschmidt drove in the only runs as St. Louis edged Kansas City 2-0 to open a two-game series between the cross-state rivals.

Flaherty headed for the showers after throwing 110 pitches, and the St. Louis bullpen nailed down the victory. Andrew Miller worked around a single in the eighth and retired Alex Gordon in the ninth, and Carlos Martínez got the final two outs, completing the four-hitter while earning his 13th save.

Glenn Sparkman (3-8) did everything the Royals asked over six sharp innings. He allowed two runs, one of them earned, but still hasn’t won since a July 16 shutout of the White Sox.

“With every start I’m getting a little better. Still shaky in the first through third,” he said. “But overall I felt pretty good today. Definitely a lot of things to work on still.”

Both Cardinals runs were scored in scrappy fashion. The first came when Dexter Fowler reached on an error in the first, advanced on a groundout and scored on Goldschmidt’s sacrifice fly, and the second came on Edman’s single in the third just before he was caught between bases to end the inning.

The way Flaherty was going, that was all St. Louis needed.

He gave up a two-out double to Hunter Dozier and intentionally walked Jorge Soler in the first, but got Cheslor Cuthbert to pop out and end the inning. Flaherty proceeded to retire 12 more in succession before Nicky Lopez led off the sixth inning with a base hit.

Flaherty wound up getting a double play and striking out Dozier to end that inning.

“His fastball’s got life. Slider is tight. Good arm action with pitches,” the Royals’ Whit Merrifield said. “He locates well, moves it around. He doesn’t miss a whole lot. When he does miss it’s not in the zone. So he does a good job of keeping you on your toes.”

TWINS 7, BREWERS 5 Christian Yelich returned to the starting lineup and sparked a late rally, but it wasn’t enough for host Milwaukee as Marwin Gonzalez hit a three-run home run off of Josh Hader to propel Minnesota to a come-from-behind victory.

GIANTS 3, ATHLETICS 2 Madison Bumgarner struck out nine over seven innings and outdueled fellow left-hander Brett Anderson, pitching host San Francisco past Oakland. Evan Longoria and Kevin Pillar each hit RBI doubles during a string of three consecutive two-out doubles by the Giants in the sixth against Anderson (10-8). Bumgarner (8-7), 4-0 over his previous nine starts with the Giants going 8-1, allowed two hits and didn’t walk a batter for the sixth time this year.

BRAVES 5, METS 3 Ronald Acuna Jr. hit a home run and threw out a runner at the plate to back Max Fried’s fifth consecutive victory, leading host Atlanta past New York. Acuna sparked a two-run first against Zack Wheeler by leading off with a long single off the wall in right-center, coming around to score his 100th run of the season. In the fourth, he lined a 409-foot drive into the left-field seats for his 34th home run. Acuna ended the sixth by scooping up a single to left by Juan Lagares and rifling a one-hop throw to the plate to get Todd Frazier trying to score from second.

PHILLIES 4, CUBS 2 J.T. Realmuto hit a home run and drove in the tiebreaking run with an RBI double in the seventh inning to lift host Philadelphia over Chicago. Jason Vargas allowed 2 runs and 5 hits in 6 innings for the Phillies. Blake Parker (Fayetteville, Arkansas Razorbacks) and Mike Morin each tossed a hitless inning and Hector Neris finished for his 21st save in 25 chances.

DODGERS 15, MARLINS 1 Rookie Will Smith had his first two home run game, and visiting Los Angeles twice hit back-to-back home runs in a rout of Miami. Cody Bellinger tied a career high with his 39th home run and Justin Turner hit his 20th for the Dodgers, who totaled six home runs, a season-high 13 extra-base hits and no singles until there were two outs in the ninth.

DIAMONDBACKS 9, ROCKIES 3 Jarrod Dyson homered on the second pitch of the game during a five-run first inning and was later involved in a quirky double play as visiting Arizona cruised over Colorado. It was Dyson’s third career leadoff home run — all this season. Christian Walker, Nick Ahmed and David Peralta added two-run home runs off Jeff Hoffman (1-4),.

BLUE JAYS 3, RANGERS 0 Five Toronto pitchers combined on a five-hitter, Teoscar Hernandez and Billy McKinney hit back-to-back home runs, and the host Blue Jays beat slumping Texas. Blue Jays outfielder Randal Grichuk celebrated his 28th birthday with a solo home run as Toronto won for the fifth time in seven games. Texas has lost six of seven, a stretch in which the Rangers have been shut out twice and scored more than three runs just once.

RED SOX 7, INDIANS 6 (10) Jackie Bradley Jr. hit a home run with one out in the 10th inning as visiting Boston edged Cleveland after blowing a late lead and potential victory for ace Chris Sale. Rafael Devers had six hits — four doubles — and made a costly error at third base for the Red Sox, who won for the fourth time in 16 games. Bradley hit his 14th home run of the season off Nick Wittgren (4-1). It was anything but easy as Boston blew a 6-1 lead over the final four innings, costing Sale his seventh win on a night when he also made history by getting to 2,000 career strikeouts faster than any other pitcher.

ASTROS 6-1, WHITE SOX 2-4 Ivan Nova tossed a four-hitter and host Chicago took advantage of an injury to Houston ace Gerrit Cole for a victory and split of a doubleheader. Houston won the first game behind six solid innings from Zack Greinke in his second start with the Astros and solo home runs by George Springer and Jose Altuve. Cole didn’t start because of right hamstring discomfort. Instead, right-hander Chris Devenski (2-1) took the mound and lasted two innings in taking the loss.