Judge to hear lawsuit challenging I-30, I-630 projects 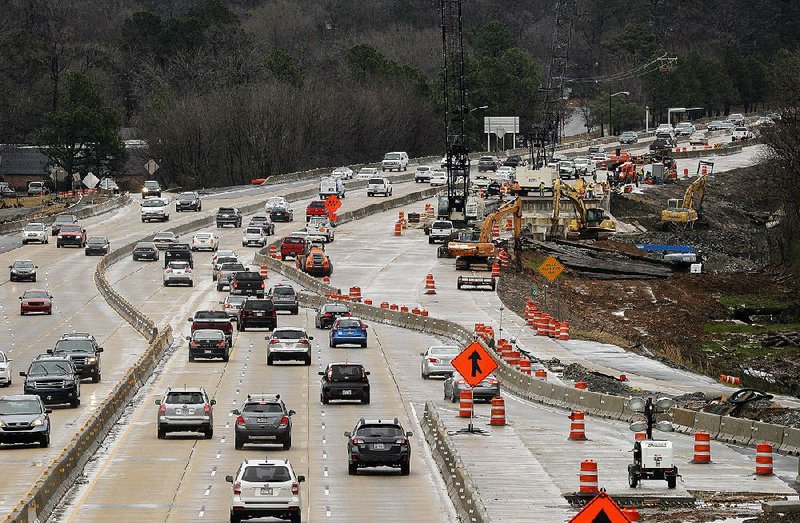 Opening statements are scheduled to begin at 9 a.m. today in a lawsuit challenging the legality of state spending on two Pulaski County interstate widening projects.

Circuit Judge Chip Welch has reserved one day for the trial over the lawsuit that says a "plain reading" of Amendment 91 to the Arkansas Constitution limits improvements to four-lane highways or two-lane highways being widened to four lanes under the Arkansas Department of Transportation's $1.8 billion Connecting Arkansas program.

Defendants, led by the highway department, had argued that a "plain reading" would lead to "absurd results." They cited, for example, projects on highways that are four lanes in most places but also have a center-turn lane, or fifth lane, in some places.

Such a "narrow and limited interpretation" would preclude spending on any projects being funded under Amendment 91, they said in their legal arguments.

Lawyers for both sides spent less than an hour before Welch on Tuesday to argue for their pretrial motions, which focused on limiting evidence either party could introduce at trial. Welch denied the motions.

"I'm inclined to let it all in and sort it out," the judge said from the bench.

Welch also said he will keep time and try to evenly divide it between the plaintiffs and defendants.

The trial comes after Welch in May denied motions from both sides seeking summary judgments.

"After consideration of the undisputed facts herein, and giving full deference to the constitutional amendment when possible, the only thing clear to the Court is that reasonable minds could very well reach different conclusions" on the meaning of 'four-lane highways,'" the judge wrote in his decision.

The two projects at the center of the lawsuit include the $87.4 million widening of a 2.2-mile section of Interstate 630 in west Little Rock to eight lanes from six. The work began last summer and is scheduled to be completed next year.

The other is a 6.7-mile section of Interstate 30 through downtown Little Rock and North Little Rock. Construction won't begin until next year under the $631.7 million project, which will replace the I-30 bridge over the Arkansas River and widen some sections to 10 lanes from six.

Both projects rely on significant funds from the Connecting Arkansas Program, which focuses on regionally significant jobs around the state. The program is financed in large part by a half-percent sales tax contained in Amendment 91, which voters approved in 2012. The tax is in place for 10 years.

The amendment language defines "four-lane highway improvements" to include "four-lane roadways, bridges, tunnels, engineering, rights of way and other related capital improvements and facilities appurtenant or pertaining thereto, including costs of rights-of-way acquisition and utility adjustments."

The amendment contains other references to four-lane highways, including that the bonds issued as part of the program are payable from the Arkansas Four-Lane Highway Construction and Improvement Bond Account.

Justin Zachary, a Conway attorney, represents four Arkansas residents who sued to stop any Amendment 91 monies from being used on the projects.

They are Shelley Buonauito and Sara B. Thompson, both of Fayetteville; Mary Weeks of Little Rock; and Verlon Abram of the Cleburne County community of Wilburn. A fifth plaintiff, Richard Mason of El Dorado, dropped out of the lawsuit.

Print Headline: Judge to hear lawsuit challenging I-30, I-630 projects