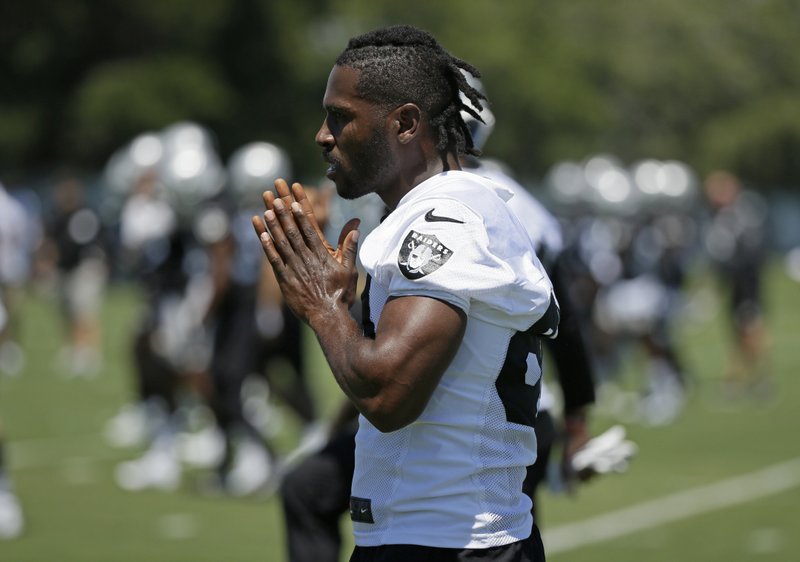 NAPA, Calif. -- Antonio Brown has returned to the Oakland Raiders training camp facility after missing time to see a specialist for his frostbitten feet and losing a grievance with the NFL over the use of a helmet.

Brown walked on the field surrounded by cameras late in practice Tuesday and greeted his teammates for the first time since leaving the team about a week ago.

Brown says he has been meeting with a foot specialist to get healthy from frostbite and blisters that came while getting cryotherapy treatment in France. Brown has also been fighting with the NFL over his helmet, which is no longer certified for practice or games.

Brown's agent, Drew Rosenhaus, says they have found a new helmet and are waiting to get it certified for use.

Brown says he has no timeline for when he will be able to return to practice but Coach Jon Gruden said he expects him to be ready to play the season opener Sept. 9 against Denver.

EAST RUTHERFORD, N.J. -- New York Giants wide receiver Golden Tate has had the appeal of his four-game suspension for a violation of the NFL's policy on performance enhancers turned down.

The decision by an independent arbiter was announced Tuesday and means the 10-year-veteran will miss the first four games of the regular season, starting with Dallas on Sept. 8.

Tate, who signed a $37.5 million contract as a free agent with the Giants in March, announced the suspension in a Twitter post on July 27. He said he intended to appeal it and felt his case had merit because he was using a fertility drug prescribed by a doctor.

The appeal was heard by a member of an independent appeals panel in New York last week.

Tate will be eligible to practice with the team until the start of the regular season.

In his tweet last month, Tate said he has never violated the league's rules on banned substances. He noted the treatment was for a fertility issue and it will have no effect on this season.

FOXBOROUGH, Mass. -- Quarterback Danny Etling's tenure with the Patriots has come to an end.

The Patriots completed a trade with Atlanta on Tuesday to acquire tight end Eric Saubert for a conditional draft pick. The Patriots released Etling to make room for Saubert on the 53-man roster.

Etling, a seventh-round pick out of LSU in 2018, spent last season on the practice squad. After the Patriots drafted Jarrett Stidham in April, Etling tried to convert to wide receiver. But competition at the position pushed him far down the depth chart.

Saubert, who is entering his third season, had five catches for 48 yards for the Falcons in 2018. He played in 16 games with one start. He had one catch for 7 yards in the Falcons' first two preseason games.

ASHBURN, Va. -- Adrian Peterson says he won't be discussing financial woes that came to light over the summer.

The Washington Redskins running back conducted his first interview of training camp Tuesday and declined to answer a question about pending legal action against him. Peterson was sued last month over failure to fully repay a $5.2 million loan and was ordered to pay $2.45 million to another creditor.

"I won't be addressing none of that," Peterson said. "I thought maybe you would figure that I wouldn't. But I knew someone would probably ask, so I'm not going to be talking about none of that. You guys got questions pertaining to that, I won't be answering it."

Lawyer Chase Carlson said in a statement last month that "the truth behind Adrian Peterson's current financial situation is more than is being reported at this time."

Peterson had been off-limits to reporters since the start of camp because of the off-field situation.

INDIANAPOLIS -- Andrew Luck will likely miss the rest of the preseason with an injury near the front of his left ankle.

Colts General Manager Chris Ballard says he isn't sure if the injury will keep Luck out of the Sept. 8 season opener against the Los Angeles Chargers.

Indy's starting quarterback has been dealing with lower leg pain since straining his left calf in March. Luck missed all of the team's offseason workouts and has not participated in any full team drills at training camp.

Ballard spoke to local reporters on a conference call after team owner Jim Irsay told SiriusXM that the Colts believed Luck had injured a small bone near the back of the ankle. But Ballard says additional testing determined the bone was not the cause of Luck's pain.