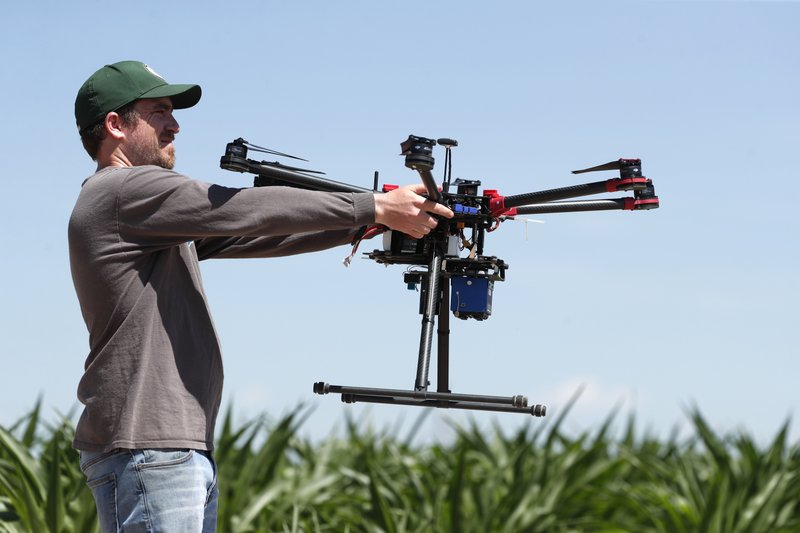 In this Thursday, July 11, 2019, photograph, United States Department of Agriculture intern Alex Olsen prepares to place down a drone at a research farm northeast of Greeley, Colo. Researchers are using drones carrying imaging cameras over the fields in conjunction with stationary sensors connected to the internet to chart the growth of crops in an effort to integrate new technology into the age-old skill of farming. (AP Photo/David Zalubowski)

GREELEY, Colo. -- A drone soared over a hot cornfield in northeastern Colorado on a recent morning, snapping images with an infrared camera to help researchers decide how much water they would give the crops the next day.

After a brief, snaking flight above the field, the drone landed and the researchers removed a handful of memory cards. Back at their computers, they analyzed the images for signs the corn was stressed from a lack of water.

This U.S. Department of Agriculture station outside Greeley and at other sites across the Southwest are experimenting with drones, specialized cameras and other technology to squeeze the most out of every drop of water in the Colorado River -- a vital but beleaguered waterway that serves an estimated 40 million people.

Remote sensors measure soil moisture and relay the readings by Wi-Fi. Cellphone apps collect data from agricultural weather stations and calculate how much water different crops are consuming. Researchers deliberately cut back on water for some crops, trying to get the best harvest with the least amount of moisture -- a practice called deficit irrigation.

[Video not showing up above? Click here to watch » https://www.youtube.com/watch?v=Wn0cM09cr9Q]

The researchers' goal is understanding crops, soil and weather so completely that farmers know exactly when and how much to irrigate.

"We call it precision agriculture, precision irrigation," said Huihui Zhang, a Department of Agriculture engineer who conducts experiments at the Greeley research farm. "Right amount at the right time at the right location."

"It's like almost every month somebody's coming up with something here and there," said Don Ackley, water management supervisor for the Coachella Valley Water District in Southern California.

Researchers and farmers are running similar experiments in arid regions around the world. The need is especially pressing in seven U.S. states that rely on the Colorado River: Arizona, California, Colorado, Nevada, New Mexico, Utah and Wyoming.

The river has plenty of water this summer after an unusually snowy winter in the mountains of the U.S. West. But climatologists warn the river's long-term outlook is uncertain at best and dire at worst, and competition for water will only intensify as the population grows and the climate changes.

The World Resources Institute says the seven Colorado River states have some of the highest levels of water stress in the nation, based on the percentage of available water supplies they use in a year.

The river supplies more than 7,000 square miles of farmland and supports a $5 billion-a-year agricultural industry, according to the U.S. Bureau of Reclamation.