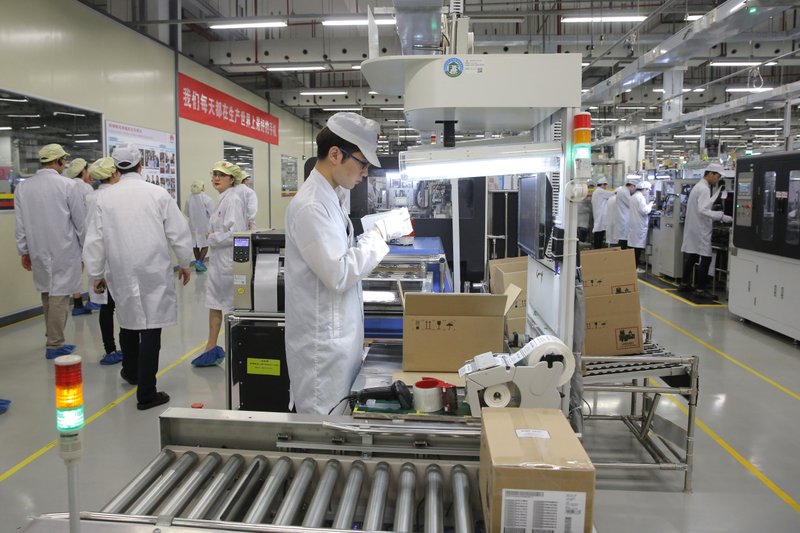 FILE - In this March 6, 2019, file photo a staff member works on a mobile phone production line during a media tour in Huawei factory in Dongguan, China's Guangdong province. Huawei Technologies Co. is one of the world's biggest supplier of telecommunications equipment. The United States is delaying tariffs on Chinese-made cellphones, laptop computers and other items and removing other Chinese imports from its target list altogether in a move that triggered a rally on Wall Street. (AP Photo/Kin Cheung, File)

President Donald Trump's administration Tuesday narrowed the list of Chinese products on which it plans to impose new tariffs as of Sept. 1, delaying levies on cellphones, laptop computers, toys and other goods for more than three months to spare shoppers from higher prices during the back-to-school and Christmas seasons. Stocks soared on the news.

The move pushed a new 10% tariff on some goods until Dec. 15 and excluded others entirely.

Trump's earlier tariffs on Chinese imports were carefully crafted to hit businesses in ways that consumers would mostly not notice. But his announcement this month of the 10% tariff on $300 billion of Chinese goods meant shoppers would soon feel the trade war's sting more directly.

On Tuesday, Trump acknowledged as much.

[Video not showing up above? Click here to watch » https://www.youtube.com/watch?v=mBIy_8Yrq9w]

"We're doing this for the Christmas season," he told reporters. "Just in case some of the tariffs would have an impact on U.S. customers."

Trump said his administration had a "very productive" call with China and that he thinks Beijing wants to "do something dramatic" on trade.

"They really would like to make a deal," Trump said Tuesday before boarding a helicopter in Morristown, N.J.

Trump has been pressing Beijing since last year to make a trade deal that would, among other things, strengthen protections for U.S. intellectual property, open Chinese markets to U.S. business, and result in China buying large quantities of U.S. energy and agricultural goods.

But negotiators have made little progress since May, when progress stalled over several issues. The stumbling blocks include whether Trump would roll back the 25% tariffs the administration has already imposed on roughly $250 billion of Chinese goods and whether Beijing would enshrine in law the changes it has pledged to make.

The president's comments Tuesday about the tariffs' effect on consumers followed an announcement by the U.S. trade representative's office that while the new tariffs would take effect as Trump had threatened, some notable items would not immediately be subject to them.

Consumer electronics, video game consoles, some toys, computer monitors and some footwear and clothing items were among the items the trade representative's office said would not be hit with tariffs until retailers had time to stockpile what they needed for their busiest time of year.

"What this means is that retailers will be able to get their shipments in without the 10% tariff, which is a sigh of relief," said Poonam Goyal, a retail analyst at Bloomberg Intelligence. "It definitely saves the holiday season."

With the Sept. 1 deadline, there wasn't time for retailers to speed up ordering for the Christmas season because it often takes more than four weeks for inventory to come from China, Goyal said.

The administration also said some products were being removed from the tariff list altogether "based on health, safety, national security and other factors." A spokesman for the trade representative's office said the products being excluded from the tariffs included child car seats, shipping containers, cranes, certain fish, and Bibles and other religious literature.

The Dow Jones industrial average rose about 1.44%, while the tech-heavy Nasdaq Composite, which houses a great deal of U.S. companies with exposure to China, closed up 1.95%. Apple, Intel, Cisco and Microsoft were among the biggest gainers, showing how much the technology sector is tied to the China economy.

Earlier Tuesday, Trump had criticized China for not making large purchases of U.S. farm goods, suggesting that the tariffs might force them into action.

"As usual, China said they were going to be buying 'big' from our great American Farmers," he wrote on Twitter. "So far they have not done what they said. Maybe this will be different!"

David French, a spokesman for the National Retail Federation, said the organization was pleased by the delay of levies on certain consumer goods but expressed caution.

"Continued uncertainty for U.S. businesses and consumers is a drag on the economy," he said. "What we really need is an effective strategy to address China's unfair trade practices by working with our allies instead of using unilateral tariffs that cost American jobs and hurt consumers."

While markets applauded the splitting of the new tariffs, the sudden turnaround also means that some businesses are once again being left to make important business decisions on the fly because of the president's trade policies.

"It's too late and it's not enough," said Peter Bragdon, chief administrative officer for the Columbia Sportswear Co. "There's continued chaotic policy making and incoherence coming out of Washington that makes it very hard for businesses in the United States to plan."

Columbia still has products including footwear such as waterproof hiking boots that would be hit with a 10% tariff come next month. While only 10%-15% of Columbia's products were made in China, production of specialized footwear was difficult to move, Bragdon said, and the company had already warned customers that it would be forced to raise some of its prices.

In some cases the splitting of the tariffs will make life more complicated for retailers and other businesses. Some categories of golf shoes, for example, will be subject to a 10% tariff Sept. 1 while others will not be targeted until Dec. 15. Apple Inc.'s iPhones will not face new import taxes until mid-December. But the popular wireless AirPods that go with them will be taxed in September.

"It shows the increasing chaos of the administration's trade strategy toward China. And despite the president's claims, it's the clearest sign yet that Trump actually does understand that the tariffs are hurting American companies and consumers," said Edward Alden, a trade expert at the Council on Foreign Relations. "It will also further weaken the already slim chances for any negotiating progress in September. Why would the Chinese make difficult decisions if they can wait out Trump and wait for him to fold when the stock market sags?"

Jay Foreman, CEO of the toy company Basic Fun, said he's pleased that the 10% tariffs have been delayed for products like his until December. His company, based in Boca Raton, Fla., had already set prices for the Christmas season and would have had to absorb the impact of the tariffs. Foreman said he is considering layoffs this fall to offset his higher costs and noted that despite Trump's reprieve, tariffs remain a severe threat.

"We were relieved," he said. "But does that stop the volatility and instability? No."

Information for this article was contributed by Ana Swanson of The New York Times; by Taylor Telford and Thomas Heath of The Washington Post; by Jenny Leonard, Shawn Donnan, Olivia Rockeman, Jonathan Roeder, Jordyn Holman, Joe Deaux, Justin Sink and Sarah McGregor of Bloomberg News; and by Paul Wiseman, Christopher Rugaber, Anne D'Innocenzio and Larry Fenn of The Associated Press.