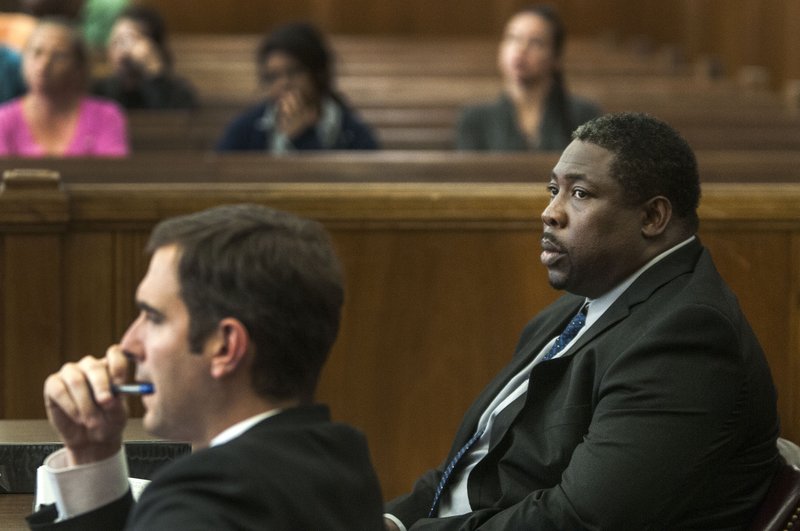 Marvin Stanton looks on as final statements are given Wednesday, May 4, 2016 at the Miller County Courthouse. (Photo by Jerry Habraken /Texarkana Gazette)

A man who shot and killed another over a parking spot at a Texarkana convenience store in 2015 was sentenced, for a second time, to life in prison plus 15 years on Wednesday.

Marvin Arrell Stanton, 53, was first sentenced in a May 2016 trial but an appellate court overturned his conviction. In August 2018, a second attempt to try the case ended in a mistrial after just one day of testimony.

On Wednesday evening, the jury sentenced Stanton to life for murder and a maximum 15-year term for using a firearm in the commission of a felony — the same decision Stanton's first jury reached. The sentences handed down Wednesday must be served consecutively and there is no parole from a life sentence in Arkansas.

Prosecuting Attorney Stephanie Potter Barrett and Deputy Prosecuting Attorney David Cotten described Stanton as a bully who resorted to gunplay Sept. 25, 2015, when he was outmatched by Hamilton in a fistfight that lasted less than a minute in the parking lot of the Raceway gas station on State Line Avenue in Texarkana.

Hamilton and two friends were about to leave the store when Stanton pulled up on his motorcycle and said, "Move your (expletive) truck."

Witnesses testified that Stanton, who is about 6 feet and weighs approximately 340 pounds, showed Hamilton a gun holstered on his hip and warned that he is a former Marine.

Hamilton, also a former Marine, attempted to resolve the dispute verbally but the confrontation became physical after Stanton shoved Hamilton forcefully into the side of his truck.

Witnesses testified that Hamilton got the best of Stanton in a fight. The fight was over and the men were standing at least 5 feet apart when Stanton pulled his .45, engaged its laser sight and fired a shot into Hamilton's gut. Hamilton, a husband and father of a young child, died that night at a local hospital.

During the punishment phase of Stanton's trial late Wednesday afternoon, the jury heard testimony from a contractor who Stanton threatened with a gun when the contractor asked Stanton to pay an overdue bill. The jury also heard from a woman Stanton hit in the face after a verbal dispute.

"Obviously, Marvin Stanton deserves life plus 15 as two different juries have sentenced him the same," Barrett said. "It's unfortunate that the family has had to endure the pain of trial more than once, but justice for Jesse is finally served."

Cotten spoke of the family Hamilton's untimely death left behind.

"We are thankful the jury was able to provide justice for the Hamilton family and his 5-year-old daughter, Ainsley," Cotten said. "The jury put in hard work, did a great job and the result bears that out."

Stanton's lawyers, Jeff Rosenzweig and Natalie Dixon of Little Rock, argued that Stanton's actions were justifiable self-defense. Stanton was taken into custody by Miller County deputies after the trial.

He will be held in the Miller County jail until he is transported to a unit of the Arkansas Department of Correction.