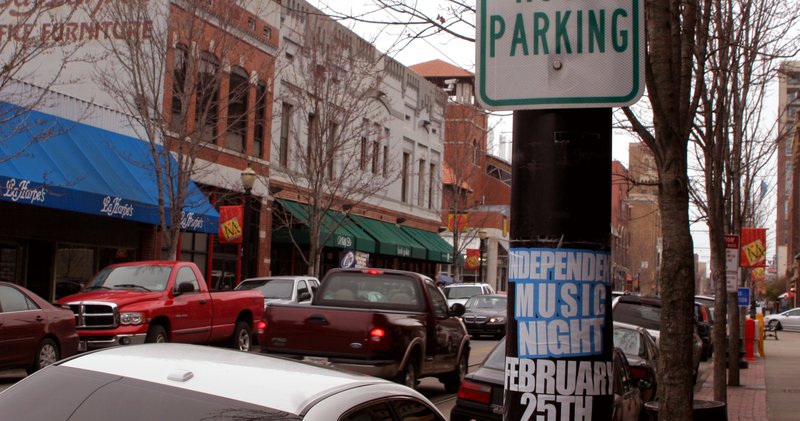 City partners have set guidelines regarding legal drinking on city streets in Little Rock's first entertainment district, which is to open next week in part of the downtown River Market area.

Legislation, approved by the city board last month, will become city code Aug. 23, and city partners have planned a launch that will include the debut of branded cups, wristbands and signs marking off areas where adults will be allowed to drink beer, wine and mixed drinks from open containers outside of establishments.

The district spans four blocks of President Clinton Avenue, from Interstate 30 to South Cumberland Street, and encompasses the River Market Ottenheimer Market Hall and the outdoor pavilions behind it.

Act 812, sponsored earlier this year by state Sen. Trent Garner, R-El Dorado, gives cities the authority to set reasonable standards for the regulation of alcohol possession within such districts.

Although Little Rock's planned launch Aug. 23 is the same day that the legislation allowing for the creation of the entertainment district becomes city code, City Attorney Tom Carpenter said Wednesday that the action won't be fully safe from a challenge by referendum until Sept. 21, per the state constitution.

"The thing's not really out of the woods until 30 days after the effective date of the ordinance," Carpenter said. "I think whoever did it probably felt confident that nobody's going to challenge it."

Overturning the entertainment district would require a ballot referendum, which would need to be put in place by a petition with a number of signatures equal to at least 15% of the total number of voters in the previous election for mayor, not including the runoff, Carpenter said. The petition would have to be submitted to the city by Sept. 21.

The city passed two ordinances July 23 -- one allowing Little Rock to establish entertainment districts, and the other allowing the city to establish the River Market Entertainment District specifically -- but did not approve an emergency clause, meaning the ordinances become effective 30 days after the date of their passage.

Diana Long, director of River Market operations, said no one working on the entertainment district's launch had been made aware of the constitutional provision.

Carpenter said he mentioned the provision at the July 23 meeting but didn't follow up. He said he generally advises waiting until such measures are in the clear.

"Nobody asked, as far as I know," Carpenter said of the provision, adding that he wasn't aware of any planned challenges to the district.

City partners Wednesday outlined the regulations ahead of the kickoff date.

Patrons looking to take alcoholic beverages outside of the point of purchase and into public spaces within the roughly four-block River Market entertainment district will be required to wear branded wristbands, and the beverages must be in official cups bearing the district's logo and that of a sponsor, such as Budweiser or Cutwater Spirits.

Using both cups and wristbands helps make it easier for Little Rock police to identify patrons, Long said. If someone has one but not the other, it might be a sign for police to make sure the person is of legal drinking age, she said.

The wristbands will be snap-on plastic bands similar to hospital bracelets. The city chose plastic wristbands over paper ones because paper wristbands can easily be torn off and re-stuck on a different person's wrist.

The district's boundaries will be defined by branded light pole banners and sidewalk decals.

Not all establishments within the zone are participants for either purchasing alcohol or carrying it. Long said Barakat Bespoke, which sells custom suits and menswear, doesn't allow beverages, and Flying Fish won't use the branded cups because it doesn't sell alcohol in a bar-style format.

Daniel Bryant, who owns Big Whiskey's, Gus's and Ernie Biggs, said Wednesday that it's been a team effort among business owners to prepare and make sure things run smoothly.

Although he's anticipating a bigger influx of customers because of concerts at the Verizon Arena the first two weekends the entertainment district is set to launch, Bryant said he doesn't think "we've ever had something that we couldn't handle" and that all the business owners were ready to deal with the changes.

The River Market District also plans to extend the hours of its ambassador program as the entertainment district launches, keeping yellow-vested employees available to answer visitors' questions on the streets an hour later than usual.

Bryant said many downtown stakeholders also plan to volunteer to walk the streets during the opening weekends and help people understand the new rules.

"It's just about ownership of it, being willing to stand behind it and shepherd it through," Bryant said.