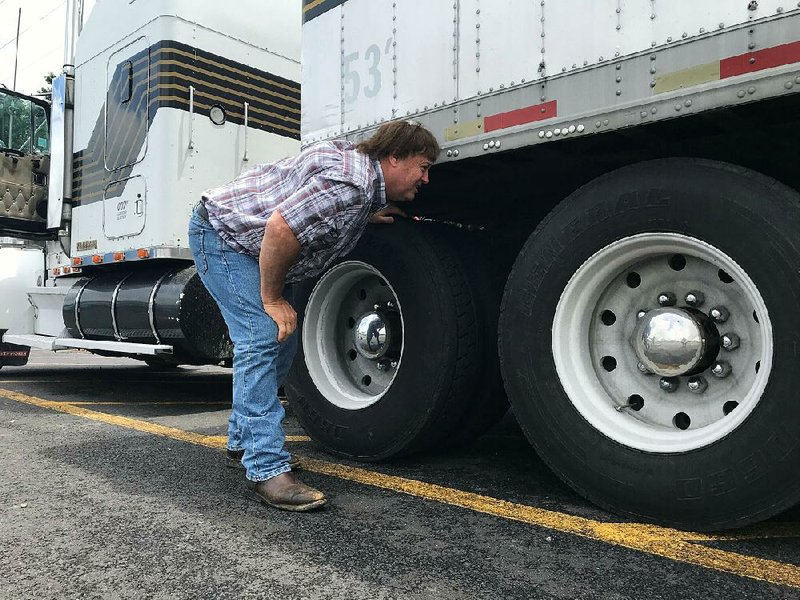 Terry Button, a truck driver from upstate New York who has logged about 4 million miles since he started driving in 1976, welcomed the Trump administration proposal to relax rules on truckers’ driving hours, saying “It’s good that the government finally took the time to listen to the people who do the job.”

WASHINGTON -- The Trump administration took a key step Wednesday toward relaxing federal rules that govern the length of time truck drivers can spend behind the wheel, a move long sought by the trucking industry but opposed by safety advocates who warn that it could lead to more highway crashes.

The Federal Motor Carrier Safety Administration, an agency of the Transportation Department, issued proposed changes to the "hours of service" rules, which dictate breaks truckers are required to take, and their time on and off duty.

"It puts a little more power back in the hands of the drivers and motor carriers," said Raymond Martinez, head of the federal safety agency. Martinez said the agency listened to drivers and their calls for safer and more flexible rules.

But highway safety groups have warned that putting the revisions into place would dangerously weaken the regulations.

"The agency is offering flexibility without regard for the fact that it could be exploited by the worst actors in the industry, including drivers who will operate while fatigued and motor carriers who will coerce them to do so," said Harry Adler, executive director of the Truck Safety Coalition.

There were 4,657 large trucks involved in fatal crashes in 2017, a 10% increase from the year before, according to a May report issued by the agency. Sixty of the truckers in these accidents were identified as "asleep or fatigued," although the National Transportation Safety Board has said this type of driver impairment is likely underreported on police crash forms.

Trade groups that represented truck drivers and motor carriers have pushed for years for less rigid hours of service rules, arguing that the regulations were too rigid and out of step with the daily realities confronting most truck drivers. They found a supporter in President Donald Trump, who has made rolling back layers of regulatory oversight a priority.

"To me, having the flexibility is huge," said Terry Button, a hay farmer from upstate New York who owns his truck and has logged about 4 million miles since he started driving in 1976. "It's good that the government finally took the time to listen to the people who do the job." Button spoke to The Associated Press on Wednesday.

The existing regulations limit long-haul truckers to 11 hours of driving time within a 14-hour on-duty window. Drivers must have had 10 consecutive hours off duty before the on-duty clock starts anew. A driver who is going to be driving for more than eight hours must take a 30-minute off-duty break before hitting the eight-hour mark.

Under the proposed revisions, truckers could take a break while they are on duty but not driving. Drivers have complained that long waits for cargo to be loaded or unloaded keep them idle yet they are still required to take an off-duty break, even if they do not need to rest or cannot find suitable parking for a big rig.

The administration also is proposing to allow drivers to "pause" the 14-hour driving window for an off-duty break of up to three hours, provided the trucker still takes the 10 consecutive hours off duty at the end of the work shift.

Short-haul drivers are exempt from logging their time electronically if they meet certain criteria that include starting and returning to the same location within 12 consecutive hours and not exceeding a 100-mile radius. The proposal would extend the on-duty period to 14 hours and increase the distance limit to 150 miles.

Eric Teoh, a senior statistician with the Insurance Institute for Highway Safety, had urged against lengthening the short-haul work period. In a letter sent to Martinez and the agency last year, Teoh said a recent study by the institute showed that interstate truck drivers operating under the short-haul exemption had a crash risk 383% higher than those not using the exemption.

The powerful American Trucking Associations, whose members include the nation's largest motor carriers and truck manufacturing companies, said in a statement that the revisions maintain the "core principles" of the regulations.

A group representing independent truck drivers hailed the "common-sense approach" that will make it easier for truckers to avoid heavy traffic, bad weather and other adverse situations.

"Truckers have families and want to get home safely just like everyone else. They are the most knowledgeable, highway safety advocates and the agency's proposal, overall, recognizes that fact," said Todd Spencer, president of the Owner-Operator Independent Drivers Association.

The proposal will be published in the Federal Register next and be open for public comment for 45 days. Martinez said he couldn't say when a final rule would be issued and take effect but he described what the agency issued Wednesday as a critical step in the process.