Forces not expected in Hong Kong 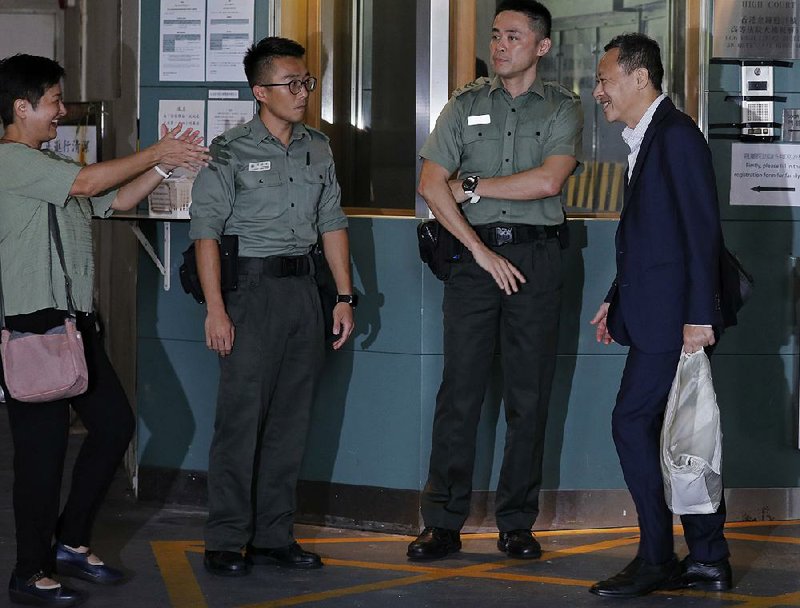 HONG KONG -- Three senior Hong Kong police officers said Thursday that they are not aware of any plans for Chinese forces to join efforts to quell mass demonstrations in the territory, as images this week showed paramilitary exercises in a neighboring mainland city.

The officers added that they are unsure whether they would be informed ahead of time if Chinese paramilitary or army forces were deployed in Hong Kong. They agreed to speak to reporters for foreign media outlets only on the condition of anonymity.

Protests that began in early June have paralyzed parts of the territory, including its international airport, and led to more than 700 arrests. The largely peaceful rallies attended by tens of thousands of Hong Kong residents have increasingly concluded in clashes between some protesters and police. While protesters have thrown bricks, gasoline bombs and other objects at law enforcement, riot police have countered with tear gas and rubber bullets in an attempt to disperse crowds.

The senior police officers said the situation is "worse than Occupy Central," a 79-day pro-democracy sit-in in 2014. While the current movement was initially a response to now-suspended extradition legislation, the focus has since shifted to democracy and demands for an independent inquiry into police brutality allegations.

No officer has been disciplined for use of excessive force since the protests began, according to the senior police officers.

"It's difficult to say if we are really losing public support," one officer said. Another officer referred to a "silent majority" of Hong Kong residents who support the police but are afraid to publicly voice their opinions.

Residents of neighborhoods hosting the protests have taken to heckling police officers and calling them "gangsters" after media footage showed police officers swinging their batons at protesters and firing rubber bullets and tear gas at close range. The senior police officers said about 300 of their colleagues have had their personal information put online. In some cases, people have appeared at officers' homes at odd hours or circulated photos of their children.

China's ambassador to the U.K. said Thursday that the Beijing government will not "sit on its hands" if the situation in Hong Kong continues to deteriorate after more than two months of near-daily street protests.

Liu Xiaoming said extremists masquerading as pro-democracy activists are dragging Hong Kong "down a dangerous road." He said at a news conference in London that if unrest becomes "uncontrollable," the central government would not "sit on its hands and watch."

"We have enough solutions and enough power within the limit of the Basic Law to quell any unrest swiftly," he said, referring to Hong Kong's mini-constitution adopted after the former British colony was handed over to China in 1997. "We hope this will end in an orderly way. In the meantime we are fully prepared for the worst."

Satellite photos show what appear to be armored personnel carriers and other vehicles belonging to China's paramilitary police parked in a sports complex in the city of Shenzhen, across the border in Hong Kong, in what some have interpreted as a threat from Beijing to use increased force against protesters.

China's Defense Ministry has pointed to a legal provision that would allow Hong Kong-based Chinese troops to be deployed for "public order maintenance" at the request of the city government. The troops, called the Hong Kong Garrison, released a promotional video earlier this month that showed soldiers partaking in a "riot drill" in which they fired tear gas and water cannons at people who appeared to be protesters.

Hong Kong authorities, however, have maintained that they are capable of handling the situation themselves.

The senior police officials said they have 3,000 officers who are currently deployed for riot-control operations and hundreds others to draw from.

Flights have mostly resumed after being halted by mass demonstrations and spasms of violence Monday and Tuesday at Hong Kong's airport. Police made five arrests Tuesday night and 17 more on Wednesday during clashes outside police stations in the Sham Shui Po district.

In a possibly hopeful sign for the opposition, a leader of an earlier protest movement imprisoned on public-disorder charges was released on bail Thursday.

Benny Tai was sentenced to 16 months in April as one of nine leaders put on trial for their part in a 2014 drive for universal suffrage known as the Umbrella Movement. He was allowed to return home on $12,755 bail but was barred from leaving Hong Kong and will have his appeal heard in late February, according to the court.

Information for this article was contributed by Jill Lawless of The Associated Press.