It eases out of conflict, reveals U.S. had sought to take control of vessel by Compiled by Democrat-Gazette staff from wire reports | August 16, 2019 at 6:54 a.m. 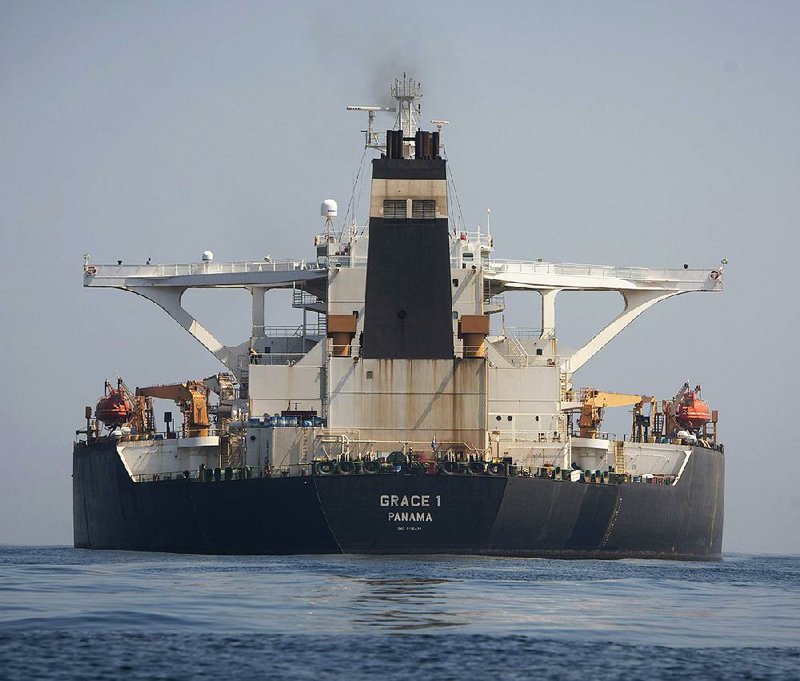 The Grace 1 supertanker sits in Gibraltar waters Thursday. The Iranian vessel, seized July 4 by British marines and Gibraltar port officials, was released Thursday despite U.S. efforts to take possession of it.

LONDON -- Authorities in Gibraltar on Thursday released an Iranian oil tanker they impounded six weeks ago, defying a United States request hours earlier to seize the ship. The ship's crew also was released from detention.

Iran gave no immediate signal on whether it would soon release a British tanker that it had seized in retaliation, but Iranian officials have previously hinted at the possibility of such a trade. An oil trader in Iran who had been briefed on the dispute said the British ship would be released once the Iranian tanker reached Greece.

The moves were the latest sign that officials in Gibraltar, a semiautonomous British territory, Tehran and London, in negotiations over the past few weeks, were trying to step back from an escalating confrontation between Iran and the West, particularly the United States.

The Gibraltar government revealed Thursday morning that the United States had applied to seize the Iranian vessel, Grace 1. The U.S. action was the latest in a series of back-and-forth jabs that the United States and Iran have traded recently, raising fears of escalation into an all-out conflict in the Persian Gulf.

British marines and Gibraltar port officials seized the Iranian ship July 4, saying that it was carrying oil to Syria in violation of a European Union embargo. Iran quickly retaliated by detaining a British-flagged tanker, the Stena Impero, in the Strait of Hormuz, the narrow entryway to the Persian Gulf.

[Video not showing up above? Click here to watch » https://www.youtube.com/watch?v=rFcpa-TOO7A]

The chief minister of Gibraltar, Fabian Picardo, said in a statement Thursday that he had "received written assurance" from Iran the previous day that "if released, the destination of Grace 1 would not be an entity that is subject to European Union sanctions."

"In light of the assurances we have received, there are no longer any reasonable grounds for the continued legal detention of the Grace 1," he said.

"This is an important material change in the destination of the vessel and the beneficiary of its cargo," Picardo said in the statement, adding that the move ensured that the Syrian government of President Bashar Assad would be deprived of more than $140 million of crude oil.

When asked later in a CNN interview where the ship was headed, Picardo said, "That is not an issue for the authorities in Gibraltar."

The oil trader in Iran said the tanker would sail to Greece and then to Italy, though it remained unclear who would buy Iranian oil in defiance of U.S. sanctions. Iranian officials have insisted that the oil was always bound for Europe, not Syria.

The Iranian government said earlier this week that a deal for the release of the ship was near, which officials in Gibraltar and London would neither confirm nor deny at the time. British officials insisted that it was a matter for the Gibraltar authorities.

A court in Gibraltar ruled last month that the Iranian vessel could be held for an additional 30 days, a period that would have expired Sunday. A follow-up hearing was set for Thursday morning, in which the territory's government was not expected to ask the court to extend the detention.

But when the court met, Gibraltar officials revealed the U.S. request, and the hearing was adjourned until later in the day.

"The U.S. Department of Justice has applied to seize the Grace 1 on a number of allegations which are now being considered," the Gibraltar government said in a brief statement.

Picardo said at the time that the Gibraltar authorities would "make an objective, legal determination of that request," though the point would appear to be moot once the ship sets sail. It was not clear when that would be.

The legal basis for the U.S. request was not immediately clear, but the United States has recently imposed sanctions designed to cut off Iran's ability to sell oil. Other countries have not signed on to those sanctions, but could face serious economic penalties for defying them.

Prime Minister Boris Johnson's No. 10 Downing St. office said Iran was discussed during his meeting with President Donald Trump's national security adviser, John Bolton, earlier in the week, though no details were released.

"Having failed to accomplish its objectives through its #EconomicTerrorism -- including depriving cancer patients of medicine -- the US attempted to abuse the legal system to steal our property on the high seas," Zarif tweeted.

Gibraltar said it had "solid documentary evidence" that the vessel was bound for Syria when it was detained on July 4, but that the political fallout had prompted talks with Iranian officials in London.

As proof of those negotiations, Picardo's office released copies of communications with the Iranian Embassy in the U.K. shortly after the British overseas territory's Supreme Court decision to release the tanker.

"It's there for the whole world to see," Picardo said hours after the hearing. "Once a state says something in writing on its own letterhead, one is entitled to believe that they will comply with those obligations."

Iranian officials have insisted that Britain and Gibraltar's seizure of Grace 1 was illegal and was carried out at the behest of the United States. About 20% of the world's oil supply is carried by tankers through the Strait of Hormuz to destinations around the world.

The area has become a site of contention as tensions have risen between the United States and Iran since Trump withdrew from a landmark 2015 nuclear deal and imposed sanctions that have hurt Iran's economy.

U.S. officials have blamed Iran for attacks in May and June that damaged several tankers in the region. In addition to the Stena Impero, Iran seized a tanker last month that was registered in Panama -- a vessel chartered by a company in the United Arab Emirates -- and later said it had apprehended an Iraqi tanker.

Britain said this month that it would join a U.S.-led mission to protect ships moving through the strait.

"There is no comparison or linkage between Iran's unacceptable and illegal seizure of, and attacks on commercial shipping vessels in the Strait of Hormuz and the enforcement of E.U. Syria sanctions by the Government of Gibraltar," a spokesman for Britain's Foreign Office said in a statement on the Gibraltar court's decision Thursday.

"Iran must abide by the assurances they have provided" regarding the ship's travel to Syria.

"We will not stand by and allow Iran -- or anyone -- to bypass vital E.U. sanctions on a regime that has deployed chemical weapons against its own people," the spokesman said, referring to the Syrian government.

On Tuesday, the government of Gibraltar said it was seeking to "de-escalate issues arising since the lawful detention of Grace 1," but provided no details about what, if any, steps had been taken.

While Iran had hinted at an exchange, Dominic Raab, Britain's new foreign secretary, recently ruled out that possibility, saying that a swap would legitimize the Iranian seizure.

Information for this article was contributed by Richard Perez-Pena and Megan Specia of The New York Times; by Aritz Parra, Jon Gambrell, Jill Lawless, Danica Kirka, Eric Tucker and Amir Vahdat of The Associated Press; and by Erin Cunningham and Adam Taylor of The Washington Post.