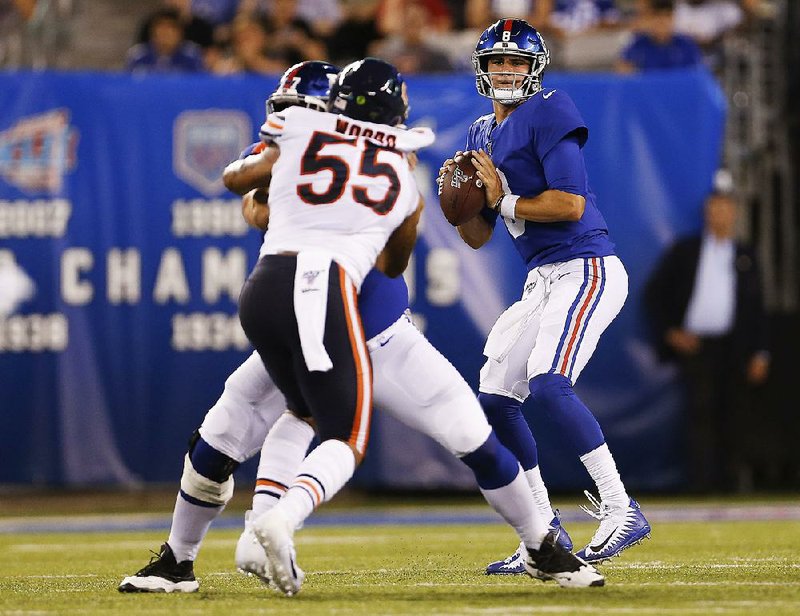 New York Giants quarterback Daniel Jones prepares to pass during the second quarter of Friday’s exhibition game against the Chicago Bears in East Rutherford, N.J. Jones was 11 of 14 for 161 yards and a touchdown as the Giants won 32-13.

Rookie Kerrith Whyte Jr., who had a 103-yard kickoff return in the second quarter nullified by a late holding penalty, scored on a 1-yard run. Eddy Pineiro kicked field goals of 41 and 27 yards for the undermanned Bears.

Much like the preseason opener against the Jets, the focus for Giants fans was on Jones, the sixth pick overall in the draft and a young man many think will lead the team back to respectability.

Jones looked good throwing the ball, hitting 11 of 14 for 161 yards, including a 15-yard touchdown to TJ Jones. The kid from Duke also showed some flaws, turning the ball over twice on fumbles. He failed to handle a snap at the Bears 19 and coughed up the ball when sacked by James Vaughters.

Manning was very solid, leading the Giants on a 10-play, 79-yard drive that was capped with an 8-yard toss to Bennie Fowler III. He was 4 of 4 for 42 yards.

Giants Coach Pat Shurmur held out running back Saquon Barkley and tight end Evan Engram for the second consecutive week. Neither is hurt.

Allen, who had A 5-6 record as a rookie starter last season, led a 13-play, 63-yard drive that culminated in a field goal, and a touchdown drive capped by a 1-yard run by LeSean McCoy to put Buffalo (2-0) up 10-0 early before exiting the game.

The Panthers (1-1) struggled mightily on offense without Cam Newton, who didn't play for the second consecutive week.

TAMPA, Fla. -- Second-year quarterback Josh Rosen was a surprise starter and went 10 for 18 for 102 yards during the first half in the Miami Dolphins' loss to the Tampa Bay Buccaneers.

Rosen, battling with 15-year veteran Ryan Fitzpatrick for the Dolphins' starting job, helped Miami to a pair of field goals and a 6-3 halftime lead.

Fitzpatrick, who spent the previous two seasons with Tampa Bay, entered to start the second half and completed 3 of 9 passes for 20 yards before being replaced by Jake Rudock five minutes into the fourth quarter.

Buccaneers quarterback Jameis Winston played one series for the second consecutive week, completing 2 of 4 passes for 24 yards. He is in the final year of his rookie contract at a salary of nearly $21 million. 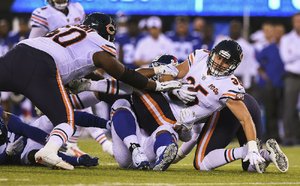 Photo by AP/SARAH STIER
Ryan Nall (35) of the Chicago Bears is brought down by New York Giants defenders during the Giants’ 32-13 victory in an NFL exhibition game Friday.