PHOTOS: Mind your vines so they don’t smother your garden ... and the forest

Keep meandering growth contained, lest it becomes invasive by JANET B. CARSON Special to the Democrat-Gazette | August 17, 2019 at 1:41 a.m. 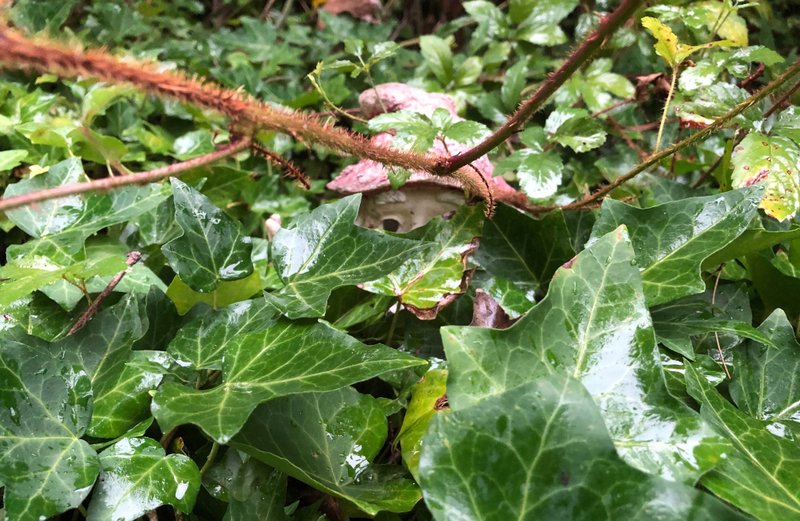 Gardeners sometimes decide that a fast-growing plant is just the thing for their yard. They would like a vine to cover a trellis or a vining groundcover to cover bare soil. Sometimes good intentions go awry, and the plants take over the landscape and then escape into the wild. Such is the case with many vines.

According to Webster, a vine is a plant whose stem requires support and which climbs by tendrils or twining or creeps along the ground. It can also be any of the various sprawling herbaceous plants (such as a tomato or potato) that lack specialized adaptations for climbing.

Vines can be woody or herbaceous, evergreen or deciduous, annuals or perennials, native and not native.

Botanists have identified 157 vines in Arkansas, with 62 considered woody and 95 nonwoody or herbaceous. Of those 157 vines, 43 are non-native and 16 have been identified as species of concern.

Some of these vines account for the most noxious invasive plants in our state — think kudzu and Japanese honeysuckle. We also have native vines that can be aggressive, including poison ivy and Virginia creeper. It all depends on where they are growing.

Consider the adage "One man's weeds, another man's wildflowers." Invasive plants go beyond weedy. Most organizations define "invasive" as a non-native species with the ability to thrive and spread aggressively outside its natural range and is likely to cause harm to the environment, human economy or human health.

"Aggressive" plants are defined as native or non-native plants that spread rapidly and can outcompete other plant species.

In my book, those definitions are pretty similar. I have a very healthy native poison ivy vine growing up a tree, and I constantly pull the native Virginia creeper and non-native English ivy — so I put them all in the "invasive" category.

Invasive and aggressive plants also reproduce easily, are tolerant of a wide range of weather conditions and grow rapidly, which allows them to overtake native vegetation.

Invasive plants cost $35 billion in damages and treatment each year.

Many of Arkansas' invasive species were planted intentionally for ornamental purposes or for a specific reason such as erosion control, as was the case with kudzu.

Some ornamental plants have escaped into the wild and have become invasive. Consider Japanese wisteria and Vinca major. Both plants are still commonly sold and planted, but if left to their own devices will spread beyond where they were intended. Wisteria can grow up into a tree and the woody vines can girdle and kill it. Wherever the vine touches soil, it can root and spread. Meanwhile, Vinca major is covering every park with its prolific vining groundcover.

When we look at the woody vines that are often a problem in Arkansas, the top contenders are Japanese honeysuckle, which is obviously non-native, kudzu — non-native — and greenbriers or Smilax — native. The latter has horrible thorns along the stem, and the plant is tough as nails.

Kudzu is typically not a landscape problem, but it blankets natural areas all across our state.

Japanese honeysuckle and greenbrier are found everywhere, from home landscapes to parks and natural areas.

Other common plants which generate complaints include two natives: poison ivy which can form a woody vine in trees or can spread as a groundcover on the ground, and Virginia creeper with tendrils that allow it to fasten itself to rocks, bricks or bark -- and it is a strong climber.

One of the largest family of woody vines in Arkansas are the dewberries, or trailing blackberries, all of which are native.

Some other invasive vines include the non-native sweet autumn Clematis (Clematis terniflora). Very soon the roadsides will be blanketed in white with the sweet-smelling blooms. While it can be pretty, if not contained, it takes over.

Ampelopsis has two species — Ampelopsis arborea (the native pepper vine) and A. brevipedunculata (the non-native porcelain berry), which can spread aggressively.

Many gardeners intentionally plant English ivy as a groundcover, but if allowed to grow unchecked, it will grow up your trees and out on the branches, which adds excessive weight to deciduous trees and can lead to limb damage. It, too, can spread across our native areas.

Some other vines to beware of include bindweed, morning glory, Japanese climbing fern, Carolina moonseed and rattan vine.

Given the right conditions, some other natives can get too aggressive, including Carolina jessamine, passionflower, trumpet-creeper and cross vine.

One that we are seeing right now is dodder, commonly called love vine. This parasite is turning bright orange now. It is an annual vine but horribly invasive. It is setting seeds that will germinate next spring. Once they begin growing, they take over their host plant and live off of it. They no longer have any root system, taking all their nutrients from the host. It is hard to eradicate.

So what do you do if vines have taken over your landscape? Identify the vines and start your control.

Physically removing as much of the problem as possible is a good place to start.

Some communities are using goats to control kudzu and other debris. You can even rent goats to come feed on your property for a bit. Others get permission for controlled burning, but neither of these is very feasible for a home landscape.

Herbicides are available, but the woodier the plant, the harder it is to kill, and often vines are entwined with desirable vegetation. So, physically pruning, digging up roots and then spot-treating the cut edges are often the best approach.

If you have an area that has gotten totally away, brush-hogging it and then covering it with clear plastic to kill the vine roots via solarization can help.

Whenever problem weeds or plants (not just vines), take over a garden, there isn't a quick fix. You will have to keep after it for several seasons.

Vines have their place in our landscapes, and there are some great ones to choose from. In the right place, some of the vines in this list do fine, but a plant out of place can take over. Do a little homework on the front end and know what to expect.

If you have a desirable vine, make sure it has a trellis or structure to grow on and keep it pruned to that structure. Avoid planting vines that are known to be too aggressive. As with any garden, the right plant in the right location cuts down on maintenance.