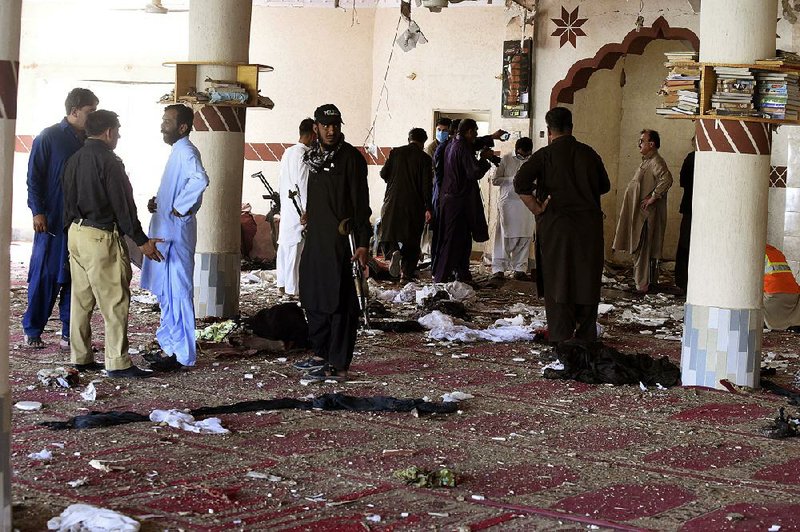 Onlookers gather Friday at a mosque on the outskirts of Quetta, Pakistan, after a bomb went off inside the structure.

QUETTA, Pakistan -- A powerful bomb exploded inside a mosque during Friday prayers on the outskirts of the southwestern city of Quetta, where the Afghan Taliban have had a strong presence, killing at least four worshippers, including the prayer leader, officials said.

Abdul Ali, a local police chief, said the bomb was planted inside the mosque and was remotely detonated. He said about 20 wounded worshippers were taken to nearby hospitals in Quetta, the capital of Baluchistan province.

Quetta police chief Abdur Razzaq Cheema said the bomb was planted under the wooden chair of the prayer leader.

It was unclear who was behind the attack but the mosque is 2 miles away from Kuchlak, a stronghold of Taliban insurgents, where Maulvi Hibatullah Akhunzada once lived before becoming the Taliban chief and moving to an undisclosed location in Afghanistan.

According to unconfirmed reports, slain prayer leader Maulvi Ahmadullah was a relative or friend of Akhunzada. The Taliban did not confirm or deny the reports.

Zabihullah Mujahid, Taliban spokesman, said he heard a report about the bombing but was not in a position to immediately confirm the details.

KINSHASA, Congo -- Congo's yearlong Ebola outbreak has spread to a new province, with two cases, including one death, confirmed in South Kivu, according to the government Health Ministry.

The new cases are "a 24-year-old woman and her 7-month-old child," said Dr. Jean-Jacques Muyembe, the director of Congo's National Institute for Biomedical Research, in a statement released on Friday.

The local Ebola response team has identified more than 120 people who may have been infected with the Ebola virus by contact with the woman and her child. Those people will be vaccinated to reduce the risk that they will get Ebola.

The Ebola outbreak in eastern Congo has killed 1,808 people out of 2,765 confirmed cases, according to the new report.

An average of 81 new cases of Ebola are confirmed each week, according to the World Health Organization, which issued an update on the outbreak Friday. WHO said that its appeal for $287 million to fund the public health part of its campaign to control this outbreak has only received $15 million so far.

Greenland assures U.S. it's not for sale

TASIILAQ, Greenland -- Greenland said Friday it's happy President Donald Trump has taken an interest in the nation, talking to aides and allies about buying the island for the U.S., but that it's not for sale.

After reports that Trump had spoken about buying Greenland, the semiautonomous Danish territory between the Atlantic and Arctic oceans issued a short statement to clarify it wasn't on the market.

"We see it as an expression of greater interest in investing in our country and the possibilities we offer," the government said. "Of course, Greenland is not for sale."

Lars Loekke Rasmussen, who served as Danish prime minister until June, weighed in on social media, tweeting "it must be an April Fool's Day joke" and that it was "totally" out of season.

A Trump ally told The Associated Press on Thursday that the Republican president had discussed the purchase but was not serious about it. And a Republican congressional aide said Trump brought up the notion of buying Greenland in conversations with American lawmakers enough times to make them wonder, but they have not taken his comments seriously. Both spoke on the condition of anonymity to discuss private conversations.

BEIRUT -- A suspected Russian airstrike hit a displaced people's gathering in a town in Syria's last rebel enclave Friday, killing at least 13, including a number of children and activists, a war monitor said.

The Britain-based Syrian Observatory for Human Rights said the strike, suspected to have been carried out by Russian aircraft, hit in the town of Hass south of Idlib province, where people displaced by the violence had congregated. The monitoring group said the attack killed at least four children.

Other activist-operated networks, including the Thiqa news agency, reported the attack and also put the death toll at 13.

Syrian troops have been on the offensive in Idlib and its surroundings, the last major rebel stronghold in Syria, since April 30 in a Russia-backed campaign. Fighting has picked up in recent days, after a collapsed, short-lived cease-fire, and government troops have been seizing territory on the enclave's edge.

Idlib and the surrounding rebel-held area are home to some 3 million people, many of them displaced in other battles around the war-torn country. In recent weeks, more than 450,000 have been displaced within the area while more than 500 civilians were killed.