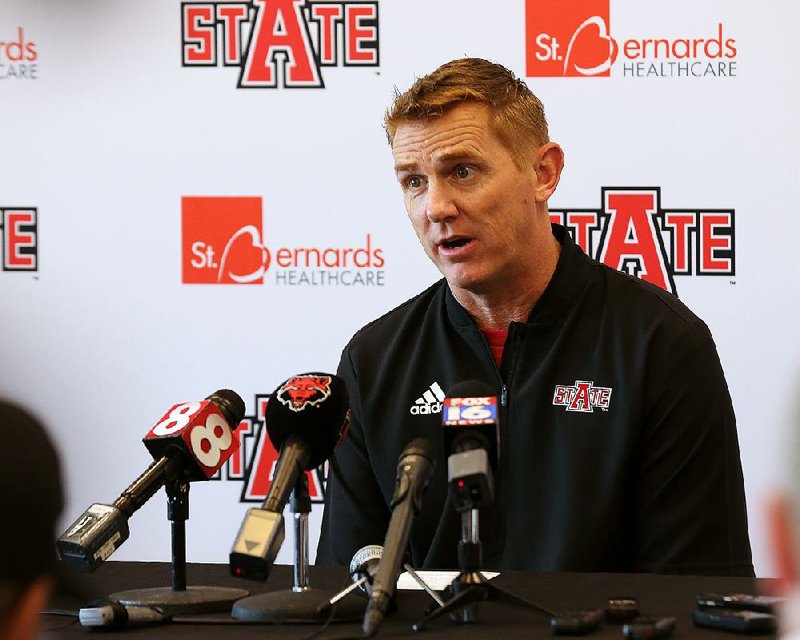 JONESBORO -- Arkansas State University Coach Blake Anderson said earlier this month that he wanted to be prepared for days like Friday.

Anderson was absent from the Red Wolves' practice and was with his wife, Wendy, according to a team spokesman.

Anderson had indicated at Sun Belt Media Day in July that the situation with his wife, who's been battling cancer for over two years, had progressed. On Aug. 1 at ASU's formal media day, he officially appointed first-year defensive coordinator and linebackers coach David Duggan as the team's assistant head coach, in case Anderson needed to step away from a team function.

"I've kind of always wanted to make sure that we were super prepared. Pray for the best but prepare for the worst," Anderson said then. "Dave is more than capable to step in at any point that he needed to, if I were pulled away [from] a meeting, a day, a press conference or a few days at a time. They're very real possibilities at some point through the next four months, and we just want to be prepared."

Duggan ran point Friday as the Red Wolves returned from an off day on Thursday and practiced indoors in helmets and no pads. A team spokesman said it was the second practice of fall camp that Anderson has missed. ASU has its second scrimmage of camp at 6 p.m. today at Centennial Bank Stadium.

"We've been discussing this since the summer time. We knew there was a possibility that he might miss a day or two here just to be with Wendy when she struggles," Duggan said following Friday's practice. "Sometimes she has a good night, sometimes she has great nights and sometimes good days, but sometimes she doesn't have the best night, like [Thursday] night. She had a tough night.

"So Blake needs to be there, be around her and wanted to be with her. We knew it was gonna happen. Our team's ready for it, and we're just moving forward with the process."

"We can feel Coach A isn't out here," Edmonds said. "But it's still the same message -- come out to practice and come work. We're still on a mission. We come out here to work for Coach A."

Much of Friday's practice was spent working through drills, rehearsing the playbook, running 7-on-7 and simulating the two-minute drill.

Junior quarterback Logan Bonner once again took all of the first-team reps on offense and looked completely in command. Sophomore tight end Tyler Reed and freshman wide receiver Jeff Foreman were among those who made highlight catches. Foreman closed the practice by hauling in roughly a 50-yard touchdown pass from senior backup quarterback Carson Coats to the delight of those in attendance.

Bonner was very critical of his and the offense's performance in the first scrimmage last Saturday, and he said the unit spent much of this week correcting mistakes and trying to gain more confidence.

"I think that [tonight] should be a good tell of what we've been doing the last week," Bonner said. "I feel like we can make plays any time. We got dynamic players at every position. I think that if we play with confidence and know our assignment and play fast, we can be as good as we want to be."

Redshirt freshman reserve defensive back Detravion Green also had two interceptions on Friday, including one he returned for a touchdown.

More than anything, Friday was about gearing up for tonight's critical second scrimmage of camp. Duggan said the coaching staff's biggest concern right now is still establishing depth and figuring out who among the reserves can be depended on.

Tonight's scrimmage will help make a lot of those key depth chart decisions, as the Red Wolves' season opener against SMU is on Aug. 31.