The long way across and around Liechtenstein

Triesenberg, the town at the highest elevation in Liechtenstein, offers beautiful views. Europe's fourth-smallest country has marked its 300th anniversary by joining all of its 11 towns via 46.6 miles of twisting, mountainous hiking trails. (Photo by Marina Pascucci via The New York Times)

I stood on the edge of the border town in the shadow of a 12th-century castle high on a hill. I was sandwiched between the craggy peaks of 7,600-foot mountains in front of me and 7,200-foot peaks behind me. The only sounds I heard were birds chirping. The rural village road I was standing on had nary a car.

What a great day to start a cross-country trek.

Telling friends beforehand, I couldn't help suppress a sheepish smile. What country are you hiking across? they asked.

OK, Europe's fourth-smallest country — behind Vatican City, Monaco and San Marino — is only 17 miles long and 9 miles wide. It is one cattle farm bigger than Staten Island. You can drive its length in 25 minutes. A middle-aged person with a long-expired gym membership could walk across it in two days.

This year marks Liechtenstein's 300-year anniversary, and it is using its tricentennial to reintroduce itself to the world. As part of its yearlong festivities, the principality created a 46.6-mile trail traversing the country, crisscrossing through all 11 of its towns — count 'em, 11 — partly on village roads but mostly on twisting and mountainous trails.

It's called the Liechtenstein Trail, and I was the country's first guinea pig.

Trekkers are able to download an app that shepherds them along the route and describes 133 points of interest. When trekkers point their phones at one of these 133 spots, augmented reality will help them visualize how it appeared in history or why it is notable.

"Historically, this is the most important event in my life," said Leander Schadler, 61, a Liechtensteiner historian and hiking guide, referring to the tricentennial.

Despite the trail having 1.24 miles in elevation gain, it's intended for hikers at all levels of ability and experience. Trekkers who get tired can stop at the next town they come to and catch a public bus back to their hotel, as my girlfriend, Marina Pascucci, did on both of the two days she joined me. Nothing in Liechtenstein is far away from anything else.

Our base was the Hotel Turna in Malbun, Liechtenstein's lone ski resort. It's in Liechtenstein's southeast corner, only a 20-minute bus ride uphill from the capital of Vaduz. It's well worth the trip for the mountain setting alone. The hotel features an outdoor hot tub, a sauna, a steam room and an indoor pool. The restaurant has a beautiful outdoor dining area with views of the ski lift and surrounding mountains. So did our room's balcony. Going in October, the offseason, the room was a relatively inexpensive 150 euros (or about $170) a night.

The Liechtenstein Trail officially opened May 26 and the app is available for download (tourismus.li/en/activities/the-liechtenstein-trail).

I, however, marched off feeling a bit naked using trail maps and my phone's iffy GPS. On sunny October days in the high 60s, here's what I found:

Marina and I took a bus from the hotel to Balzers and met Schadler on the banks of the Rhine. The first point of interest is the 12th-century Gutenberg castle, which Balzers bought from Austria in 1824 and eventually turned into a museum.

Balzers has bright white fences, vine-covered houses, a plethora of maple trees and a small creek. We walked on quiet streets then followed the Rhine until Triesen, Vaduz's "suburb" to the south.

We headed east and steeply uphill. The trail to Triesenberg reaches an elevation of 2,952 feet and then passes beautiful green meadows where dairy cows wear clanging bells. We turned onto a dirt service road that is conveniently blocked for all but foot traffic and mountain bikers.

All day we saw only five people, all joggers. We took a bus back to our hotel. 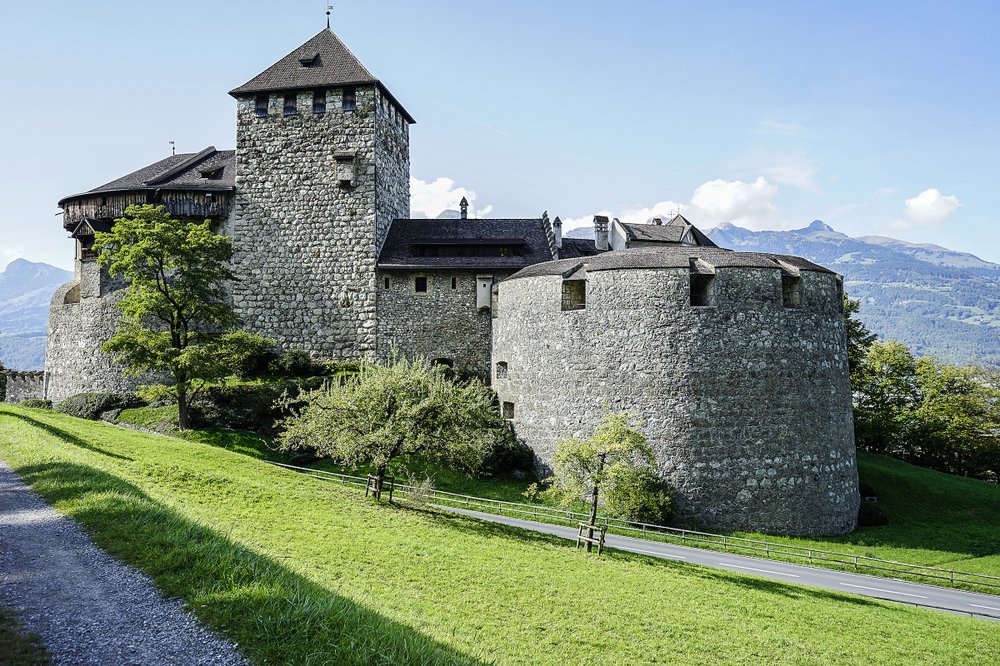 Vaduz Castle stands as one of many sights on the Liechtenstein Trail. Europe's fourth-smallest country has marked its 300th anniversary by joining all of its 11 towns via 46.6 miles of twisting, mountainous hiking trails. (Photo by Marina Pascucci via The New York Times)

Triesenberg, the town at the highest elevation in Liechtenstein, rests on a mountain with brightly painted houses sporting vegetable gardens, private vineyards and flower boxes with purple, white and pink flowers.

Martin Knopfel, 44, a Liechtenstein native and hiker who designed the anniversary course for Marketing Liechtenstein, a government agency, joined us on Day 2. The trail on this leg was mostly downhill but was no less beautiful. The main road snaking up from the valley has lookouts where I could see Triesen, church steeples, the Rhine and the Swiss Alps beyond.

We descended into a clearing, and there, looming before us, was Vaduz Castle. If a 12th-century castle can be unassuming, this one is. We passed the castle and dropped into downtown Vaduz, a small-town capital with a pedestrian mall lined with restaurants and shops that basically close down every night at 8.

I asked one of the locals what they do at night, and he said, "Go to Austria."

However quiet it is at night, Vaduz also has the most points of interests of any town in the country. On the main road, we walked by the Kunstmuseum, known for its modern and contemporary art, the Postal Museum, the National Museum and the yellow brick Parliament building.

We eventually climbed back into the forest and descended into Schaan, Liechtenstein's largest city with 6,300 people. We stopped near the bus stop for a well-deserved beer. After two days of ascending nearly 4,000 feet, my legs felt the first signs of fatigue.

"I have journalists, and they say, 'Oh, I'm a hiker and all physical, and we should go on all the tracks,'" Knopfel said. "Then they say, 'Oh, I didn't think Liechtenstein was so big.'"

Schadler picked me up at the hotel and we drove to Schaan. He and I descended from the forest in Planken, a town of postcard-perfect houses that is, coincidentally, home to Hanni and Andreas Wenzel, the brother and sister skiers who won six of Liechtenstein's 10 Winter Olympic medals from 1976 to 1984.

Day 3 also brought us face-to-face with one of the most important sites on the list of the 133 points of interest. In Planken, we came across the stone ruins of one of the four Roman villas, dating from 150 A.D., that had been constructed in what is now Liechtenstein. You could still see a large opening that had been the entrance to the villa and a smaller one that served a thermal bath complete with under-floor heating.

We continued onto mercifully flat ground into Eschen where Schadler left me at a bus stop. He said goodbye, and the navigation for the final two days would be up to my maps and my GPS. 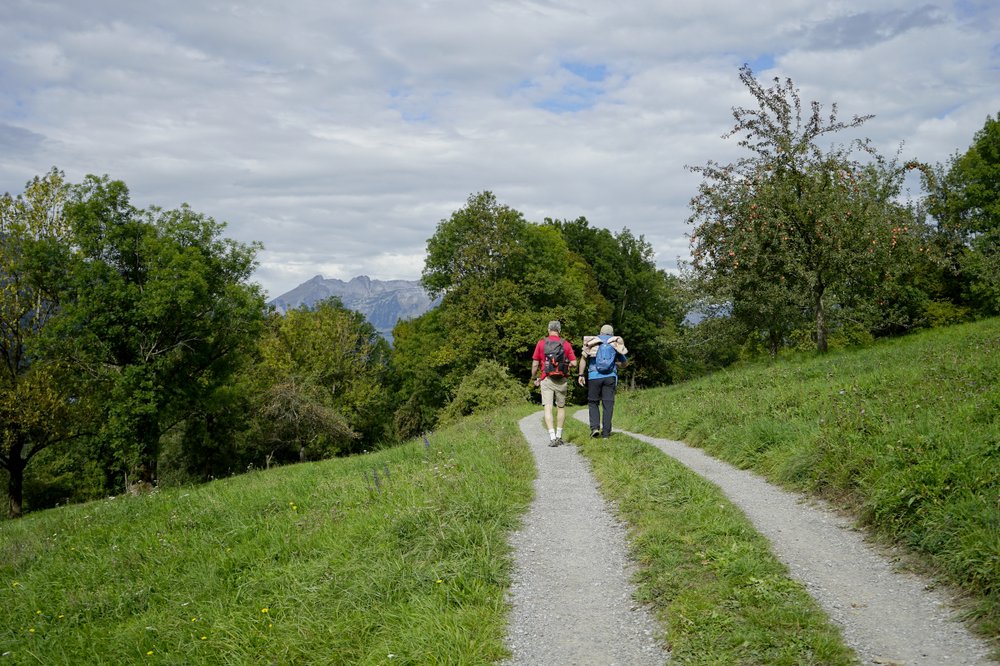 John Henderson, left, and Leander Schadler set off to walk the Liechtenstein Trail. Europe's fourth-smallest country has marked its 300th anniversary by joining all of its 11 towns via 46.6 miles of twisting, mountainous hiking trails. (Photo by Marina Pascucci via The New York Times)

I hiked the steep, quiet residential streets of the otherwise industrial town of Eschen for an hour, not the best way to start the longest hike of the week. However, the sun was just coming up on a panorama of mountains, and that gave me an early second wind.

I dipped down into Gamprin, a tiny town on the Rhine, and followed the river into Ruggell.

From Ruggell, I walked across expansive farmland before ascending through a 100-foot canopy into a clearing. Here I saw Schellenberg's claim to fame: the remains of another Roman villa, complete with a stone oven and views over Ruggell, the Rhine and the Swiss Alps.

Rising early, I made my way to a point high above Schellenberg. At 9 a.m., as I climbed through farmland, a sea of clouds settled under the mountain peaks beyond. A velvet blanket formed the perfect backdrop for the small farmhouses in the fields.

I began double-timing it to the Austrian-Liechtenstein border and the trail's end. However, my GPS failed me. I couldn't match the GPS instructions with the maps I was carrying, and I had to ask directions in Mauren three times and backtrack twice. When I finally made it through a huge green field and across the week's lone busy road, and then back into a forest, I couldn't find the wooded trail I was looking for.

Fearing I'd miss my flight out of Zurich that night, I called Knopfel, who set me straight. However, I still took the wrong exit from the forest, and when I reached the border, I was on the Austrian side.

So I ventured the 50 feet back into Liechtenstein, turned and snapped a photo of the border sign. I had reached the end of my cross-country expedition. Happy Birthday, Liechtenstein. You've aged quite gracefully!

For more information about the Liechtenstein tricentennial, visit tourismus.li/en.