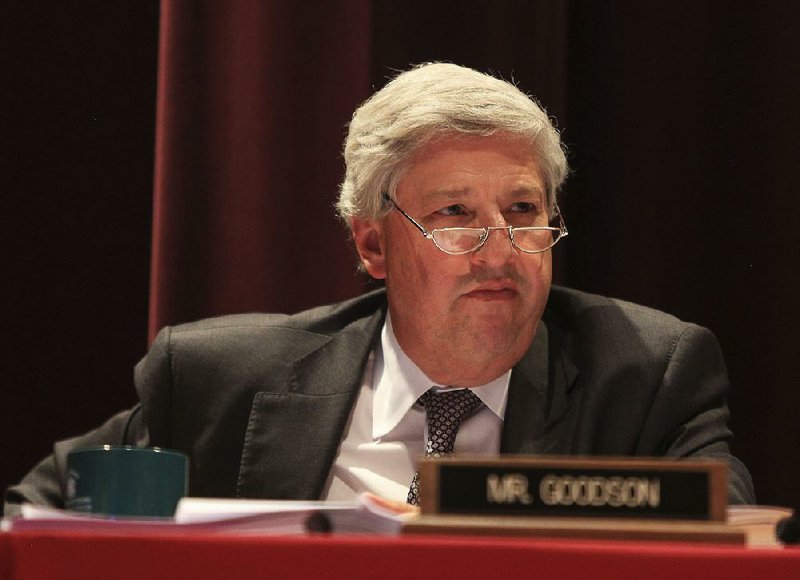 University of Arkansas System Board of Trustees board member John Goodson is shown in this photo. ( Staton Breidenthal)

Newly released FBI documents confirm that University of Arkansas System board of trustees Chairman John Goodson has been a target of a federal investigation into public corruption, starting in 2013.

At issue are more than half a million dollars in payments from Goodson’s Texarkana law firm to then-state Sen. Jeremy Hutchinson.

Goodson has not been charged with any public-corruption crime and has denied wrongdoing.

At least 16 documents related to the FBI’s Hutchinson-Goodson investigation were among files unsealed July 30 by U.S. District Judge Kristine Baker after requests from federal prosecutors and the Arkansas Democrat-Gazette.

The freshly unsealed documents, along with recent federal court testimony concerning the investigation, bring new perspective to a central question raised by federal investigators and legal experts: What exactly were the Goodson-to-Hutchinson payments for?

Explanations from documents and interviews differ:

Goodson and Hutchinson have said the money was to pay Hutchinson, a practicing lawyer who was also a new state senator in 2011, to refer new cases to Goodson’s law firm.

A signed “Joint Venture Agreement” between Hutchinson, Goodson and Goodson’s law partner says the money was to “fund the expenses related to the operation of [Hutchinson’s] law firm,” as the two law firms worked together to “investigate, prosecute and develop complex litigation matters.”

At least two FBI informants said the money was a bribe — to pay Hutchinson as a state senator to pass legislation to help Goodson’s law firm.

A former girlfriend of Hutchinson, Julie McGee, told the FBI in 2012 that Hutchinson met with Goodson in Texarkana and afterward told her, “Goodson had put him on retainer for $20,000 per month for the purpose of having Hutchinson change wording in a law before the Arkansas State Senate. Hutchinson referred privately to this as ‘Goodson’s Law,’” according to an FBI report dated June 12, 2013.

“The witness believed the change in the law would make it more favorable to the tort work Goodson does.

“Hutchinson worked hard at doing this,” the FBI report continued, “however, it did not pass during the latest legislative session.”

The FBI closed the Hutchinson-Goodson investigation in February 2015 for about two years, saying investigators “found no evidence of wrongdoing,” court records show.

Authorities restarted the investigation in March 2017, citing new information “which suggests the original allegations against Hutchinson and Goodson may be true.”

None of the newly public documents indicate whether federal authorities have closed the second investigation into Goodson, even though he faces no charges.

Testimony by FBI agent Mike Lowe at a June 11 federal court hearing in Hutchinson’s unrelated case did not address whether the Hutchinson-Goodson investigation was still open.

On the witness stand, Lowe read from a 2017 FBI file that said: “Legislative favors may have in fact been performed by Hutchinson for Goodson.”

The Texarkana lawyer, for example, denied being under federal investigation, according to an Arkansas Times blog interview on June 11.

Goodson also was quoted as saying he didn’t sign the agreement authorizing monthly payments to Hutchinson. Goodson told the Arkansas Times that his law partner Matt Keil signed it.

A “Joint Venture Agreement” dated Jan. 3, 2011, and unsealed in federal court, shows a signature by Goodson, along with Keil and Hutchinson, agreeing to pay Hutchinson $20,000 per month. That date was seven days before the start of the Arkansas Legislature’s 88th session, where Hutchinson took his seat as a freshman senator.

Such agreements are “generally permissible,” the statement said. It cautioned lawyers to consider at least four ethics issues: “the timing of the agreement, the amount of the payments, the involvement of a public official, the presence or lack of a good faith requirement, and other factors.”

The bar association committee, which advises but does not discipline the state’s lawyers, went on to remind attorneys to “avoid even the appearance of impropriety.”

Goodson and Keil haven’t responded to calls and emails from the Democrat-Gazette seeking comment.

A spokesman for U.S. Attorney Cody Hiland would say nothing about any inquiry into Goodson, saying that office doesn’t comment on whether a specific federal investigation exists, continues or is closed.

Legal experts say it’s unusual for FBI investigative documents to be made public when no one has been charged with a crime.

When those records circulate outside investigators’ offices, it’s usually in connection with another court case, and even then the documents often are withheld from the public.

In this instance, the Goodson-Hutchinson investigation records were part of a federal court hearing involving Hutchinson that took place June 10-11 in Baker’s courtroom in Little Rock. The hearing centered on campaign-finance and income-tax charges against the former legislator, to which Hutchinson had pleaded innocent.

The Goodson investigation documents were filed with the court under seal during that hearing, making them unavailable to the public.

But several flashed on a screen in the courtroom where the judge and the public could see them. Hutchinson’s former girlfriend and two FBI agents also recounted the accusations in their testimonies.

Soon after, the Democrat-Gazette and federal prosecutors asked Baker to unseal the documents. After the judge approved the request, the federal prosecutor’s office removed information considered personal or confidential, and released redacted documents Aug. 7.

Of 115 documents released, at least 16 referred to Goodson or his law firm.

For instance, Goodson, his law practice and a family member contributed $24,000 to Hutchinson’s state Senate campaign between September 2009 and December 2012, according to an FBI “Analysis of Jeremy Hutchinson’s Campaign Finance and Expenses Reports” dated July 30, 2013.

Another document is a four-page transcript of texts between Hutchinson and Lowe, the FBI agent, from June to October 2014. Lowe had started interviewing Hutchinson, seeking information related to more than one potential public-corruption inquiry.

Hutchinson: “Can u talk?”

Lowe: “Not at the moment. Can I call you later?”

Hutchinson: “I’ll call in the morning. I had an interesting conversation with Goodson — nothing incriminating but interesting.”

No further mention of Goodson is contained in those texts.

“On 05/02/2013, an FBI Confidential Human Source corroborated much of the witness’ information, to include … Hutchinson being on John Goodson’s payroll for the sole purpose of being his representative in the state Senate to pass legislation which benefits his law practice.”

Tort reform is a recurring political initiative in Arkansas that seeks to cap damages payments to plaintiffs in civil lawsuits. Most plaintiffs’ lawyers like Goodson have opposed it.

Hutchinson said he helped defeat tort changes and acknowledged that his actions would have helped Goodson, Lowe testified.

But Hutchinson consistently denied that Goodson paid him for legislative favors. Both lawyers said the payments were for case referrals.

Until the FBI records were made public to the newspaper and others earlier this month, the joint venture agreement between Hutchinson and the Keil & Goodson law firm wasn’t available for viewing.

During court testimony in June, Hutchinson described the agreement as payment for referring cases.

Goodson was quoted in the Arkansas Times blog saying the agreement’s payments were in exchange for Hutchinson referring cases and litigation theories to Goodson’s law firm. He said the firm had similar arrangements with other lawyers.

He told the Times that Hutchinson’s payments started at $20,000 per month for about two years but were eventually cut to $5,000 per month.

Hutchinson told the FBI in 2014, after two years of receiving Keil & Goodson’s monthly $20,000, that he was “a failure and did not bring any cases or big cases to the Goodson firm,” according to Lowe, the FBI agent.

The case referral explanations raised questions among lawyers and legal experts who followed the court proceedings.

One Arkansas lawyer, who asked not to be named for fear of retaliation, said: “I don’t know of anyone who gives another lawyer $20,000 a month to refer cases up front,” without regard to the number of cases eventually referred or whether those cases win or lose in court.

The Arkansas Bar Association’s Code of Conduct, based on the American Bar Association’s model, specifies that lawyers from different firms may split fees for case referrals, but only if they share the work on a case or the legal responsibility, said retired Southern Methodist University law professor Fred Moss, who has written ethics articles for lawyers.

The fee split almost always comes after a case is resolved, not upfront.

“It doesn’t look right,” Moss said of payments from the Texarkana law firm to a then-state senator for case referrals that might or might not materialize. “It’s not surprising people are raising their eyebrows about this.”

The three-page joint venture agreement said that the two sets of lawyers would work together on cases. But it contained a paragraph, 6.01, that said the $20,000 monthly payment was for Hutchinson’s law firm expenses. It also said Hutchinson should refund it before distribution of any profits.

Goodson told the Arkansas Times that he estimated total payments by the Keil & Good-son law firm to Hutchinson at $690,000 and thought his firm had collected $740,000 from three cases referred by Hutchinson. Goodson called the arrangement a $50,000 profit.

Richard Meadow, a partner with the 60-lawyer Lanier Law Firm of Houston that, like Keil & Goodson, specializes in representing plaintiffs in civil lawsuits, has a different view: “We don’t have an arrangement where we pay people to send us cases. We don’t do that.

“I don’t want to besmirch anyone without knowing the facts, but if we were to consider something like that, we would go seek ethics counsel,” Meadow said.

“Then, if it’s a state legislator to be paid, the plot thickens. I’d be concerned he was using his official position for gain, and that’s not allowed.”

Information for this article was contributed by Linda Satter and Eric Besson of the Arkansas Democrat-Gazette.

GOODSON, HUTCHINSON have deep connections, political and legal, in state. Page 10A. 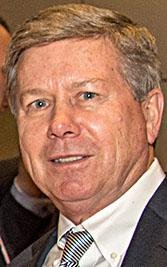 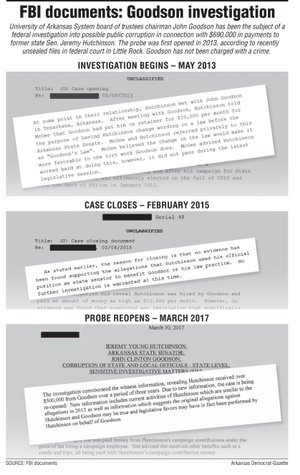