Kashmir phones back on but service limited

Lockdown being lifted, India assures by Compiled by Democrat-Gazette staff from wire reports | August 18, 2019 at 9:19 a.m. 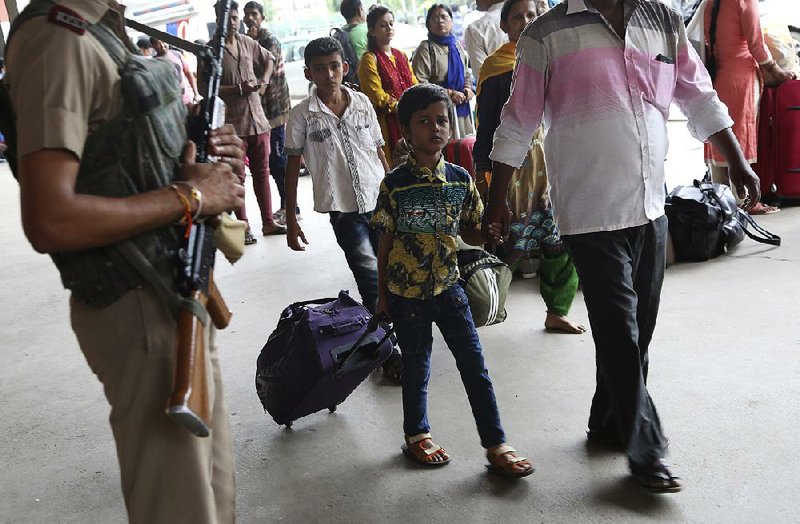 A child passes a paramilitary soldier Saturday at a train station in Bangalore in southern India. Government officials issued a security alert late Friday but by Saturday claimed it was only a drill.

However, it appeared that the Muslim-majority Kashmir Valley was getting only landline service and low-speed cellphone service. The resumption of other cellphone and Internet services was reported only in the region's Hindu-dominated Jammu division, which was not threatened by protests of India's Aug. 5 decision to downgrade the autonomy of the region.

Still, Indian officials were quick to note that curbs were being lifted. Shahid Choudhary -- a government administrator in Srinagar, the region's main city -- said government offices were open and primary schools would reopen on Monday. He also said on Twitter that food and other supplies were available "in abundance."

Police said restrictions on the movement of people were relaxed in several parts of Kashmir, though security forces remain on high alert and stringent security arrangements remain in place.

Rohit Kansal, another administrator in Srinagar, said there were six to seven minor incidents of protests in areas that remained under lockdown, suggesting clashes with security forces. He said that eight people suffered injuries, but they were in stable condition. He didn't give other details.

The government had imposed the lockdown to avoid a violent reaction to the announcement that India would end Jammu and Kashmir's autonomous status. India said its decision to directly administer the state of Jammu and Kashmir would usher in prosperity for the region where as many as 42,000 people, including civilians, army, police and militants, have died in violence in the past three decades.

"The recent decisions taken by the government of India are intended to ensure that good governance is promoted and social economic development is enhanced," Syed Akbaruddin, India's ambassador to the United Nations, said recently.

The decision by the Hindu nationalist government in New Delhi has raised tensions with Muslim-majority Pakistan and touched off anger in the Indian-controlled portion of Kashmir.

Hundreds of people took to the streets for an anti-India protest after Friday prayers in Srinagar.

There was a deadly exchange of gun and mortar firing between Indian and Pakistani forces Saturday across the militarized Line of Control that divides Kashmir between the archrivals. Both countries claim the Himalayan region in its entirety, and they have fought two of their three wars over Kashmir.

An Indian soldier was killed by Pakistani forces in Nowshera sector, Col. Aman Anand, an Indian army spokesman, said in New Delhi. Last week, Pakistani security forces said firing by India in the region killed three Pakistani soldiers and two civilians. Both sides frequently exchange gunfire in the region and accuse each other of violating a 2003 cease-fire.

Diplomats who attended the meeting said the U.S. and France blocked a Chinese attempt to get the 15-member body to publicly urge parties to refrain from actions that exacerbate tensions along the Line of Control.

Zhang Jun, China's ambassador to the U.N., blamed India for stoking tensions with Pakistan and called on both sides to exercise restraint. China is a historic ally of Pakistan, and the two nations called Friday's meeting.

"It's obvious that the [Aug. 5 decision] by India has changed the status quo in Kashmir, causing tensions in the region," Zhang told reporters after the meeting. "China is deeply concerned about the current situation and opposes any unilateral action that complicates the situation, and we call upon the relevant parties to exercise restraint."

India has called the Kashmir decision an internal matter with no bearings on its international borders with Pakistan and China. Yet Beijing has issued a strongly worded statement questioning the impact of the decision on the mainly Buddhist region of Ladakh -- an area of strategic importance nestled between Tibet and Pakistan.

One Western diplomat, who asked not to be identified discussing the private meeting, said that even though no decision was reached, the meeting helped calm tensions because it showed Pakistan that the international community is engaged on the issue.

Pakistani Foreign Minister Shah Mahmood Qureshi agreed, saying that the Security Council taking up Kashmir proved that it is an international dispute and not an internal matter for India.

Information for this article was contributed by Ashok Sharma and Zarar Khan of The Associated Press; and by David Wainer and Swansy Afonso of Bloomberg News. 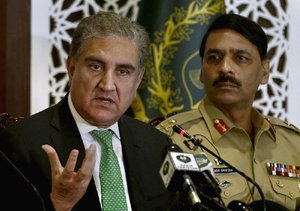 Photo by AP/ANJUM NAVEED
Pakistani Foreign Minister Shah Mahmood Qureshi (left), at a news conference Saturday in Islamabad with military spokesman Gen. Asif Ghafoor, said that deliberations Friday by the U.N. Security Council proved that the Kashmir dispute is an international issue, not an internal matter for India.

Print Headline: Kashmir phones back on but service limited