O'Rourke talks guns at Clinton Dinner, other stops in state 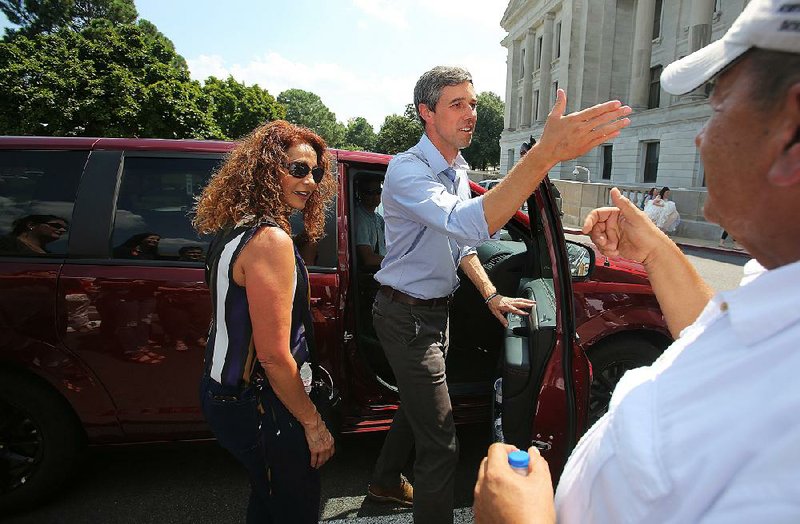 Democratic presidential candidate Beto O'Rourke attended a gun show in Conway on Saturday, where he was photographed talking to a man under a sign advertising an AR-15-style assault rifle for $395 -- a type of weapon the former Texas congressman hopes to ban if elected president.

O'Rourke was the second Democratic presidential hopeful in three days to speak in Arkansas about gun violence. He addressed a gun-control rally Saturday afternoon on the steps of the state Capitol before delivering the keynote speech Saturday night at the Democratic Party of Arkansas' annual Clinton Dinner.

U.S. Sen. Amy Klobuchar, who is also running for the Democratic nomination, gave similar talks Thursday to Democrats in the state and before the gun-control group Moms Demand Action for Gun Sense in America.

Last year, an examination by the Arkansas Democrat-Gazette found that the state had the seventh-highest rate of gun deaths in the nation.

The Democratic Party of Arkansas announced in July that O'Rourke would be the keynote speaker for the Clinton Dinner, the state party's largest fundraiser. But O'Rourke's wider swing through central Arkansas was among the candidate's first stops since resuming his political campaign after a mass shooting in his hometown on Aug. 3. That shooting in El Paso, Texas, killed 22 people.

In his keynote address, O'Rourke accused President Donald Trump of stoking racial resentment and fears against immigrants, leading to an increase in hate crimes such as the shooting in the Walmart in his hometown.

"That violence, that hatred, that racism, it found us," O'Rourke said.

At Saturday's rally, organized by Moms Demand Action, O'Rourke called for gun-control measures that he said would resonate even in conservative states like Texas and Arkansas.

O'Rourke recalled a Moms Demand Action leader from Texas encouraging him to "not just talk about this in the safe places like Austin and San Antonio" but to speak about gun control in the "reddest places on planet Earth."

On Friday, O'Rourke released a policy proposal calling for a renewed federal assault-weapons ban in addition to a "mandatory" buyback program that would have the power to fine people who do not turn in their assault weapons.

At the Conway gun show, O'Rourke told the Democrat-Gazette that he was encouraged after talking with people who did not agree with all of his gun-control proposals. He said people at the event "talked me through their perspective."

Later Saturday evening at the Clinton Dinner -- after leading several hundred Democrats in calling the Hogs -- O'Rourke drew laughs when he quipped about the gun show: "It was interesting."

Recalling a specific conversation with one gun seller at the seller's booth, O'Rourke said the man told him, "I shouldn't be able to sell guns at this show."

The Republican Party of Arkansas, in a statement released Saturday, said O'Rourke's visit had come "with minimal fanfare," and it criticized the candidate's immigration proposals.

In November, O'Rourke lost his bid for the U.S. Senate to incumbent Ted Cruz. In that campaign, O'Rourke received wide media attention for his fundraising hauls in conservative Texas.

As for Democrats in Arkansas, he said, "they remind me a lot of Democrats in Texas." Democrats "have been written off for so long" that they feel as though the state doesn't count in national politics. Yet, "they understand just as strongly as we do in Texas that we have every opportunity, and every right, to make our voices heard and to assert ourselves into our national politics."

O'Rourke said that during his campaign, he has met voters who have not seen Senate candidates from either party travel to their towns in decades. In talking to those voters, he said, he was able to win over independents and even some Republicans.

O'Rourke is one of nine Democrats to qualify for the next round of presidential primary debates in September, according to CNN. Klobuchar has also qualified.

In her speech, Klobuchar stopped short of calling for a federal gun registry and buyback program.

The U.S. senator from Minnesota said she supports universal background checks and closing the "boyfriend loophole" that allows a person convicted of domestic abuse against an unmarried partner to purchase guns. 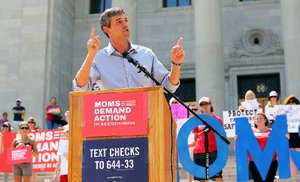